Barling Police recover over $17K in property, locate missing elderly man with use of new technology

Chief Spells credits the use of the department's new camera system, which is currently not being used by any other River Valley law enforcement agency. 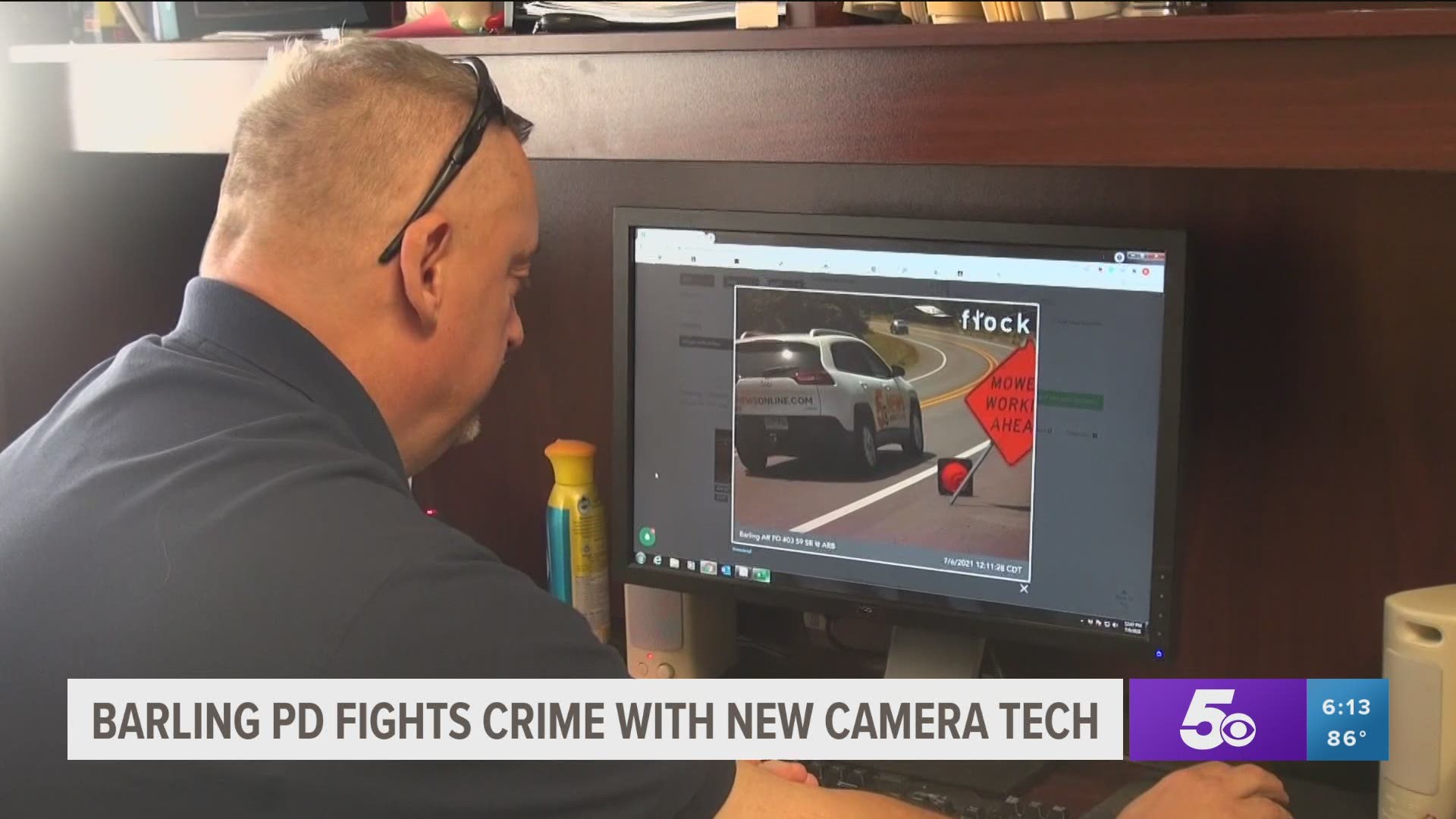 BARLING, Ark — On June 13, the Barling Police Department (BPD) was alerted by its new camera system of a stolen vehicle entering the city limits of Barling.

One of the officers spotted the vehicle, confirmed the vehicle as stolen out of Fort Smith through dispatch and initiated a traffic stop near Hwy. 22 and Mahogany Ave. A suspect on parole was arrested, and the owner of the vehicle was notified.

Since the BPD began using the new camera system in the spring of 2021, Barling Police have solved crimes ranging from vehicle thefts and stolen license plates and have received notifications of sex offenders entering the city.

The system was also used to assist in locating an elderly man missing out of Fort Smith after a silver alert was issued.

Barling Police Chief Darrell Spells credits the use of the department's new camera system, which is currently not being used by any other River Valley law enforcement agency.

The system is called Flock Safety. Cameras are set up at each entry point to the City of Barling and automatically capture images of every vehicle coming into the city and the license plate using automated license plate reader (ALPR) technology.

The system does not use facial recognition. According to Chief Spells, it only captures images of the vehicle and the license plate, which is the only information relayed to BPD officers. The BPD is only notified if an alert is sent to them on a vehicle.

“We’ve recovered lost or stolen property in excess of $17,000 since using Flock. Not only is it a crime prevention tool but also a recovery tool. It’s nice when we can get recovered property, such as vehicles back to the victims," said Chief Spells. "It’s also going to aid us in regard to Amber alerts by instantly notifying us if they enter the city."

Flock Safety is described as a public safety operating system helping communities and law enforcement in over 1200 U.S. cities to work together with the goal of reducing crime, protecting citizen privacy and mitigating bias.

Flock Safety is not law enforcement exclusive. It is also available to purchase by private citizens, homeowner associations and businesses.

Flock Safety CEO Garrett Langley credited Chief Spells' effort to keep the people of Barling safe and his commitment to ethical enforcement of the law.

"As one of the first police departments in Arkansas to use Flock Safety's ethically-built, force-multiplying ALPR technology, Chief Spells is leading the way in innovative policing," Langley said. "We know that Flock's license plate readers can reduce crime by up to 70% in communities by detecting license plates of wanted suspects, decoding investigative leads and delivering those details to the right officer at the right time. We are proud to partner with the BPD and look forward to watching their continued success at reducing crime and making Barling a safer place to live.”

On June 5, a breakfast fundraiser was held to help the BPD in funding its Flock Safety system. BPD officers and volunteers arrived and cooked pancakes and 5:30 a.m. In the middle of the fundraiser, the BPD was alerted by its Flock Safety cameras of a stolen license plate displayed on a vehicle entering Barling. One of the officers immediately left the breakfast, confirmed the tag as stolen out of Fort Smith through dispatch and conducted a traffic stop. The driver was charged with Theft by Receiving, drug charges, and warrants from outside agencies.

WATCH: Flock Safety | How we stop crime and protect privacy

Chief Spells said, "The Flock system continues to prove beneficial as a crime-solving tool for our department, and it is helping us in our effort to make our community safer. Thank you to the citizens of Barling for your support of our department and this technology!"

The next fundraiser for Barling's Flock Safety system will be held on July 3. Officers, including Chief Spells, will be in a dunk tank at the City Independence Day celebration starting at 5:30 p.m. Two throws can be purchased for one dollar. All proceeds will go toward the City's Flock system. Visit the BPD Facebook page for more information.

In response to the public's show of support at the July 3 Flock Safety fundraiser, Chief Spells posted to Facebook writing, "Thank you Barling, for supporting our department and this technology. It’s helping not only our community but our surrounding communities as well. Our officers have embraced it and are utilizing it almost daily."