Police say the suspects rammed into the police car as they were fleeing and ran over Officer Kevin Apple, killing him. 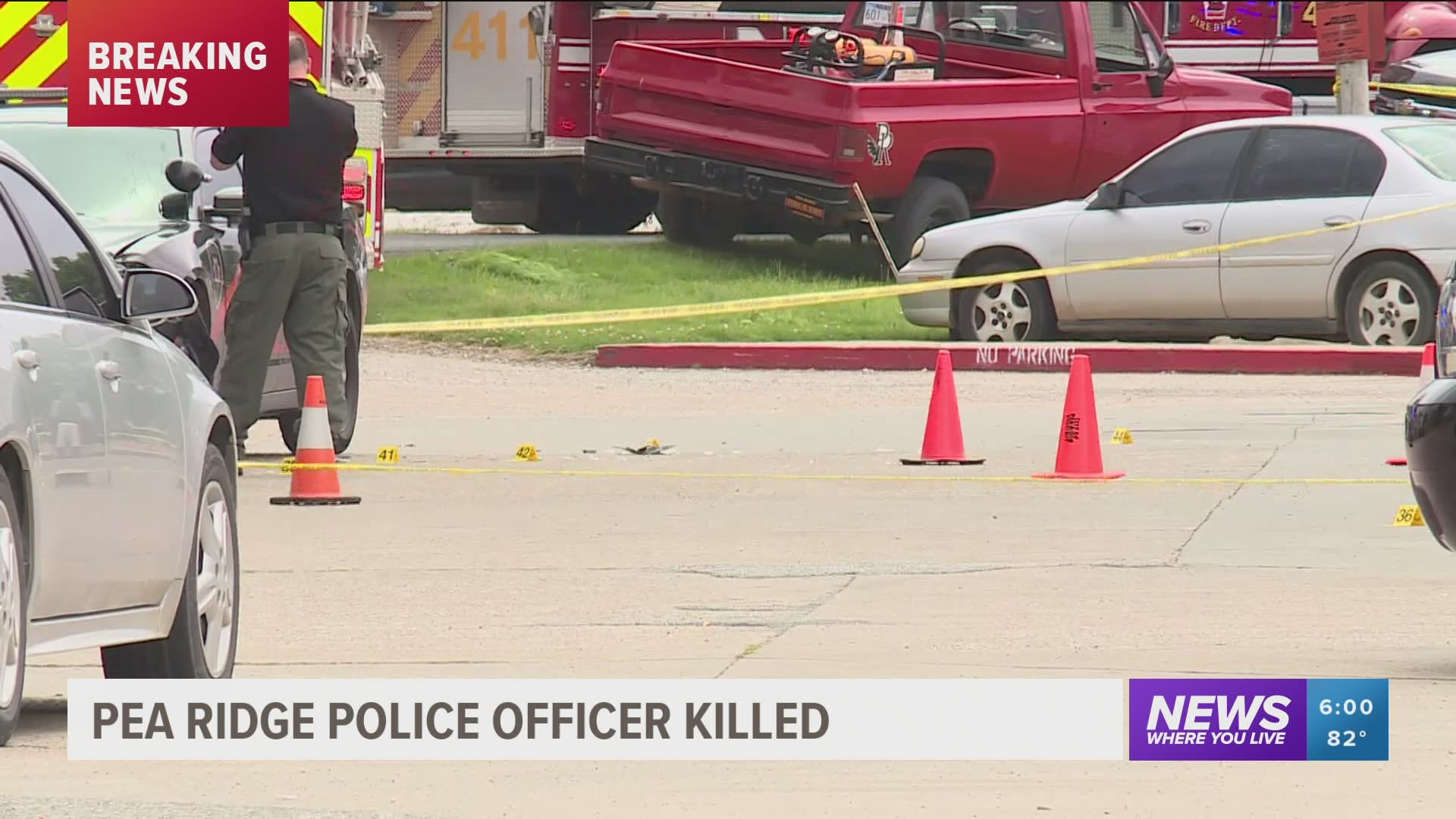 PEA RIDGE, Ark. — A Pea Ridge Officer is dead following an incident that happened Saturday morning (June 26), according to Lt. Michael Lisenbee with the Pea Ridge Police Department. Officer Kevin Dale Apple was killed in the incident while on duty.

At approximately 11:24 a.m., the Pea Ridge Police Department was alerted by Rogers Police about a vehicle they had been following. Rogers Police had been involved in a vehicle pursuit with an older model blue SUV.

Police say at 12:09 p.m., Pea Ridge Police located the vehicle parked at the White Oak gas station on N. Curtis Avenue. Officer Apple and Officer Brian Stamps attempted to make contact with the vehicle occupants, but when they did, an altercation erupted. Police say the vehicle then rammed into Officer Apple's police car as the suspects were fleeing, running over Officer Apple in the process, pinning him between the two vehicles and killing him. An affidavit states that Office Apple was also drug by the suspect's vehicles nearly 150 feet as they fled. Officer Stamps was not injured.

With the help of several surrounding departments, including the Rogers Police Department, the Benton County Sheriff's Office, Arkansas State Police, and more, the two suspects were successfully located in Bella Vista and taken into custody without incident after crashing their vehicle. According to police, one of the suspects did try to run away from officers but was later found in a camper trailer.

The suspects have been identified as 22-year-old Shawna Cash of Pine Bluff and 18-year-old Elijah Andazola of Bella Vista.

Andazola told police while being interviewed about the incident that he has known Cash since he was 15-years-old. He said they were friends, but had recently gotten romantic with one another. Cash stated the pair have had an on-and-off romantic relationship for the last six years.

Both are being held at the Benton County Jail.

Andazola was officially charged with capital murder in connection with Officer Apple's death and is being held without bond. His arraignment is set for August 2 at 8:00 a.m.

Cash has also been charged with capital murder and was not given a bond.

Cash has been identified as the driver of the vehicle that struck Officer Apple.

An affidavit following the incident shows police questioning Cash and Andazola about what happened leading up to Officer Apple's death. Neither took responsibility for the fatal crash. Andazola said Cash was driving and that he was in shock after the vehicle struck Officer Apple, and Cash said she was just doing what she was told to do and that she tends to "blackout" during stressful situations.

Cash told investigators she had smoked marijuana the morning of Officer Apple's death, but that neither she nor Andazola had done any other substances.

The Benton County Sheriff's Office will be taking over the investigation.

“Our department is in shock right now. We are a hometown, and everyone in our Police Department is family, and so we ask that you give us and our family some space. Give us some patience and time, and we do appreciate your support.”

Officer Apple was a 23-year police veteran and served with the Pea Ridge Police Department for three years. A candlelight vigil was held Saturday night at Pea Ridge City Park.

Governor Asa Hutchinson ordered flags to fly at half-staff in honor of Officer Apple. Flags are to remain at half-staff until the day of interment.

"I am deeply saddened to hear of the loss of Pea Ridge police officer Kevin Apple. My prayers are with Officer Apple’s family and the entire Pea Ridge community during this time."

“My heart aches as today marks the end of Officer Kevin Apple’s watch. He will forever be remembered for his unwavering commitment to safeguarding his community from harm,” says Attorney General Rutledge. “As the chief law enforcement officer of the State, I send my deepest condolences and prayers to Officer Apple’s family, friends, and his brothers and sisters in blue. He has left a lasting impression on law enforcement statewide and this is a devastating loss for the local community.”