BENTONVILLE, Ark. (KFSM) — Walmart announced Tuesday that it would stop selling certain types of ammunition, ban handgun sales in the only state where they̵... 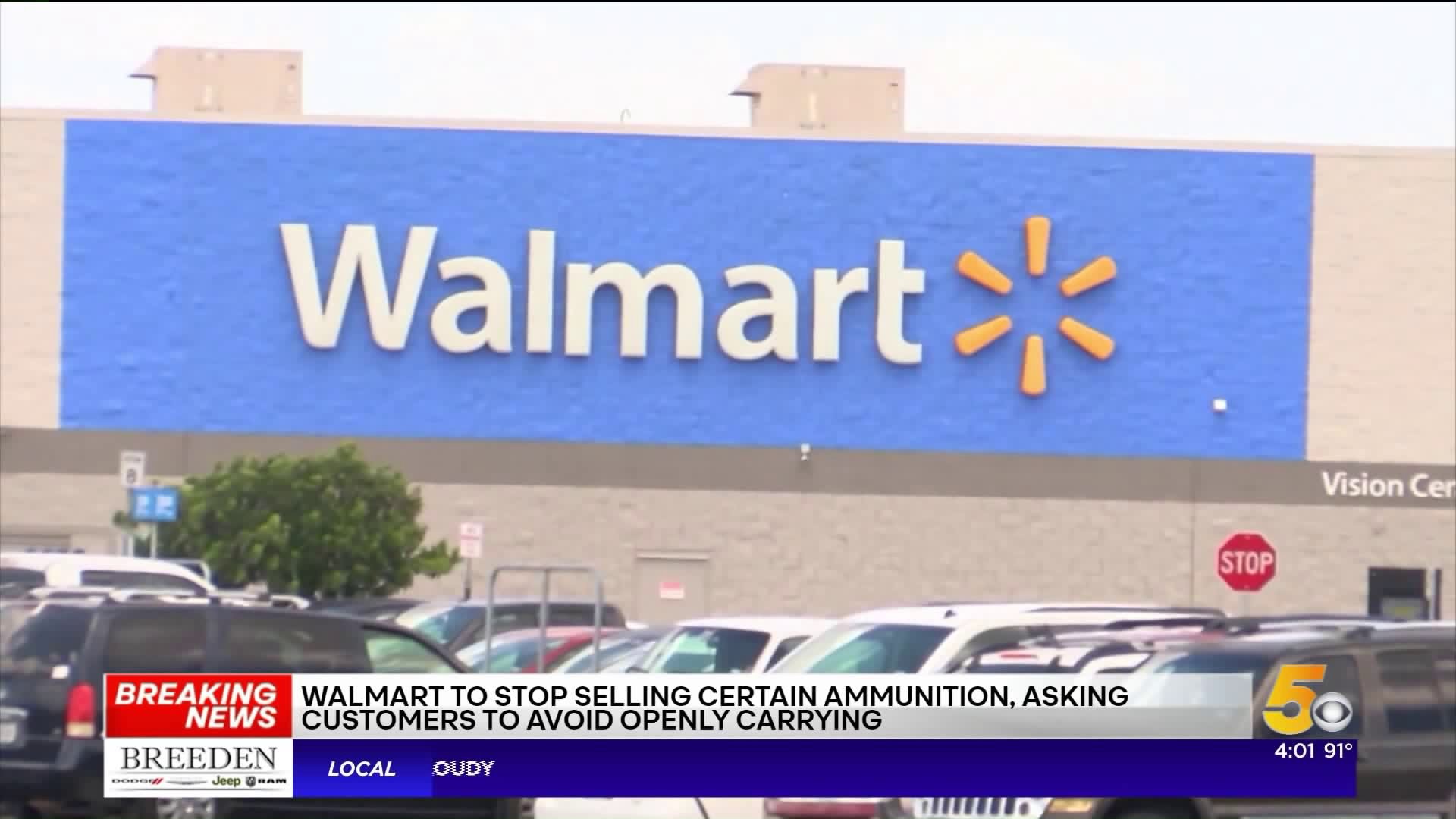 BENTONVILLE, Ark. (KFSM) — Walmart announced Tuesday that it would stop selling certain types of ammunition, ban handgun sales in the only state where they're available, and request that customers refrain from openly carrying firearms in stores even where state laws allow it in response to two recent, deadly shootings in its stores.

The company also appealed to politicians to strengthen background checks, keep weapons from those who "pose an imminent danger," and to reconsider the reauthorization of the assault weapons ban.

According to CNN, America's largest retailer said it will stop selling handgun ammunition and ammunition for short-barrel rifles after selling all of its current inventory. Walmart will also stop selling handguns in Alaska, the only state where it still sells handguns. And Walmart will request that customers no longer openly carry guns into its 4,700 US stores, or its Sam's Club stores, in states that allow open carry.

However, Walmart will continue to sell long barrel deer rifles and shotguns and much of the ammunition for those guns. Walmart will also continue to allow concealed carry by customers with permits in its stores.

Arkansas Republican Senator Bart Hester says he does support this decision to not allow customers to open carry firearms.

“I don’t want my wife walking into Walmart with an AR on his back. Does that guy have the right to do that, yes he does, but we say you can’t scream fire in an open theater for a reason. Somebody wearing an AR in Walmart is not acceptable behavior in this society,” Hester said.

Arkansas Democratic Senator Greg Leding agrees and thinks this was a good step forward because he doesn’t think allowing open carry does anything to make people any safer.

“Walmart probably wouldn’t do this if they didn’t think it was the right thing to do for their business. I think a majority of their customers want to see these changes. It might not be popular everywhere. I do think it’s in the best interest of the public,” Leding said.

Hester says Walmart has already stopped selling violent video games and assault rifles and every time there is a mass shooting they are going to be under pressure to do something else.

“I think they could save themselves a lot of grief and just stop selling guns altogether if they are not going to be able to stand up to the pressure. So, either be in the business or be out of the business but allowing someone to cut you by a thousand cuts it’s not good for the people who shop there every day,” Hester said.

Leding thinks Walmart making these changes will be good for business.

“This goes to show that you can enact change, it just takes pressure sometimes and sometimes it just takes time to get that kind of change. People are still going to be able to get ammunition and firearms, this is just something Walmart is doing for the safety of their customers and employees,” Leding said.

In a memo to employees on Tuesday, Walmart CEO Doug McMillon said Walmart's changes were prompted by the El Paso, Texas, shooting, as well as recent mass shootings in Dayton, Ohio, and Midland and Odessa, Texas.

"In a complex situation lacking a simple solution, we are trying to take constructive steps to reduce the risk that events like these will happen again," he said. "The status quo is unacceptable."

Walmart sent a memo to employees that read:

Walmart shared the announcement publicly shortly after noon on Twitter.

"We've also been listening to a lot of people inside and outside our company as we think about the role we can play in helping to make the country safer," McMillon said in a statement on its corporate site. "It's clear to us that the status quo is unacceptable."

"We know these decisions will inconvenience some of our customers, and we hope they will understand," the statement said. "As a company, we experienced two horrific events in one week, and we will never be the same."

Walmart represents about 2% of the market for guns today, the company said for the first time recently. Walmart believes it is not among the top three gun sellers in the industry, but it estimates it has about a 20% market share of ammunition sales.

On Tuesday, McMillon said that Walmart's changes to ammunition policies will reduce its market share from around 20% to between 6% and 9%. "We believe it will likely drift toward the lower end of that range, over time, given the combination of these changes," he said.

The company will also be working with other retailers to make the overall industry safer, "including sharing our best practices," the company said.

"We encourage our nation's leaders to move forward and strengthen background checks and remove weapons from those who have been determined to pose an imminent danger," McMillon said. "We do not sell military-style rifles, and we believe the reauthorization of the Assault Weapons ban should be debated to determine its effectiveness."

McMillon noted a long heritage of hunters and sportsmen within the company, going back to founder Sam Walton, who was an avid outdoorsman and quail hunter. But McMillon said the company also understood the influence Walmart carried and was working to balance the two.

"In a complex situation lacking a simple solution, we are trying to take constructive steps to reduce the risk that events like these will happen again," he said. "The status quo is unacceptable."

This is a step in the right direction—and I'm grateful Walmart has taken action—but we can't rely on corporations to stop gun violence. We need universal background checks, we need red flag laws, and we need to buy back every single assault weapon. https://t.co/m8fr3qzZcx

This is a good start—but it's not nearly enough. Walmart can and should do much more. And we need real gun reform, now. https://t.co/3gAZZ5ZxOK

This is an important step by Walmart, but we must go further. If we want to end our gun violence epidemic, we must start by passing universal background checks and banning assault weapons and high-capacity magazines.

It's your turn to act, Senate Republicans. https://t.co/mQvtAJgRei

The NRA is speaking out on Twitter against Walmart's decision to request customers to not open carry in their stores:

"It is shameful to see @Walmart succumb to the pressure of the anti-gun elites. Lines at Walmart will soon be replaced by lines at other retailers who are more supportive of America’s fundamental freedoms."

Kroger announced it was also moving to stop customers from openly carrying in their stores:

A previous draft of this story stated Walmart would ban open carry in its stores.