Two Oklahoma men are accused of performing a botched castration on a Virginia man, leading to their arrest. 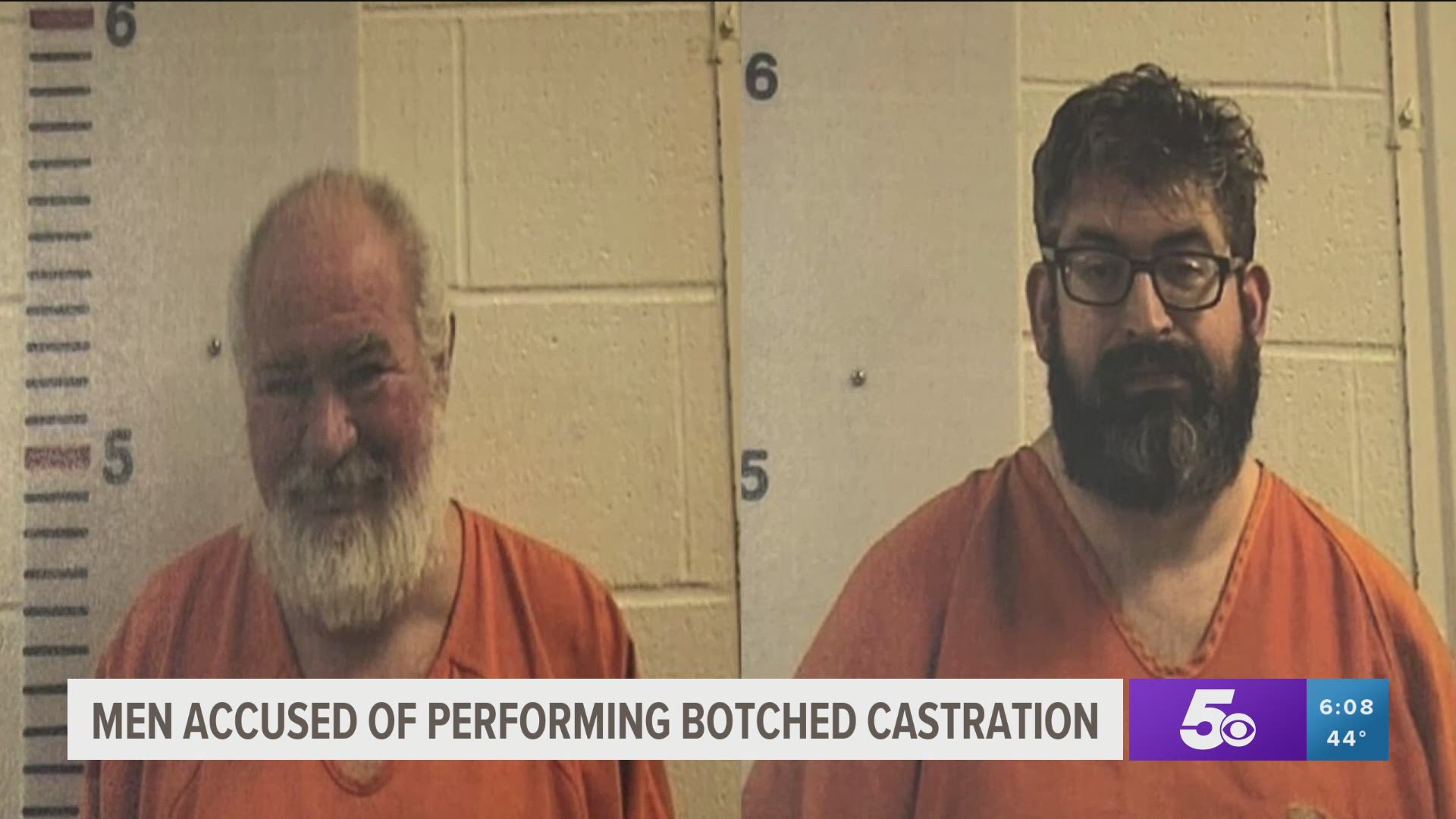 WISTER, Okla. — Two men from Oklahoma are behind bars for their involvement in one of the most bizarre crimes ever reported in LeFlore County.

Warning: Details in this article might be disturbing for some readers.

On Wednesday, Oct. 14, 2020, a deputy with the LeFlore County Sheriff's Office was alerted about a 28-year-old man from Virginia, identified as Kai Aster, at the McAlester Regional Hospital who told medical staff that he had undergone a "surgery" in Wister, Oklahoma. Aster told medical personnel that the surgery was to remove his testicles, according to court documents.

Aster told the medical staff that the surgery was performed by Bob Allen and Thomas Gates in their home in Wister. He also stated that Bob and Thomas tried to get him to participate in cannibalism.

The hospital staff confirmed that Aster's testicles were removed.

A LeFlore County Deputy and investigator arrived at the hospital to interview Aster. Aster explained to the deputy and investigator that he first contacted Bob Allen three weeks prior on a website called www.the-em.com. Aster said he came across the website while searching about castrations, court documents state. Aster told authorities that he and Allen chatted for a few days and then talked over Skype. Aster said that Allen informed him that he had 15 years of experience and that he videos the procedures for personal use. Aster told police that Allen stated that the procedure would not cost anything.

Aster took a flight from Virginia to the Dallas/Fort Worth airport on Oct. 11 and was picked up by Allen. Allen drove him to his home in Wister, Okla. from the airport.

The following day, Allen had Aster get on what he described to the police as a makeshift table covered in operation gowns. According to court documents, before the surgery, Aster was injected with Novocaine and Lidocaine in the needed areas.

The surgery lasted two hours, according to Aster. He told the police that once it was over, Allen said he would consume the parts, laughing and saying he was a cannibal. He also said that Allen told him that he once operated on someone he described as crazy and that he left the man opened up to die overnight, according to court documents.

Aster told the police that Allen had six more clients on the way for the same operation. He also said that Allen informed him that he had a freezer with body parts and showed him pictures on his phone.

Aster went to sleep following the operation and woke up the next morning with a lot of bleeding. Aster said that he called for help from Allen and that Allen told him, "No ER. No morgue." Aster said Allen finally decided to take him to the McAlester Regional Hospital, and while en route, Allen told him that if he passed out or died, he would dump him in the woods. Aster said that once they arrived at the hospital, Allen instructed him to say he did it to himself.

During his interview with the police, Aster said that Allen had a medicine cabinet containing all types of medicine such as Hydro, OxyContin, Percocet, psychedelic mushrooms, and other hard drugs, according to court documents.

Investigators entered the home, and the following items were obtained for evidence:

Following the search, the evidence was transported to the LeFlore County Sheriff's Office.

Allen and Gates were transported from the Pittsburg County Sheriff's Office to LeFlore County for booking.

No update has been given on the condition of Kai Aster.