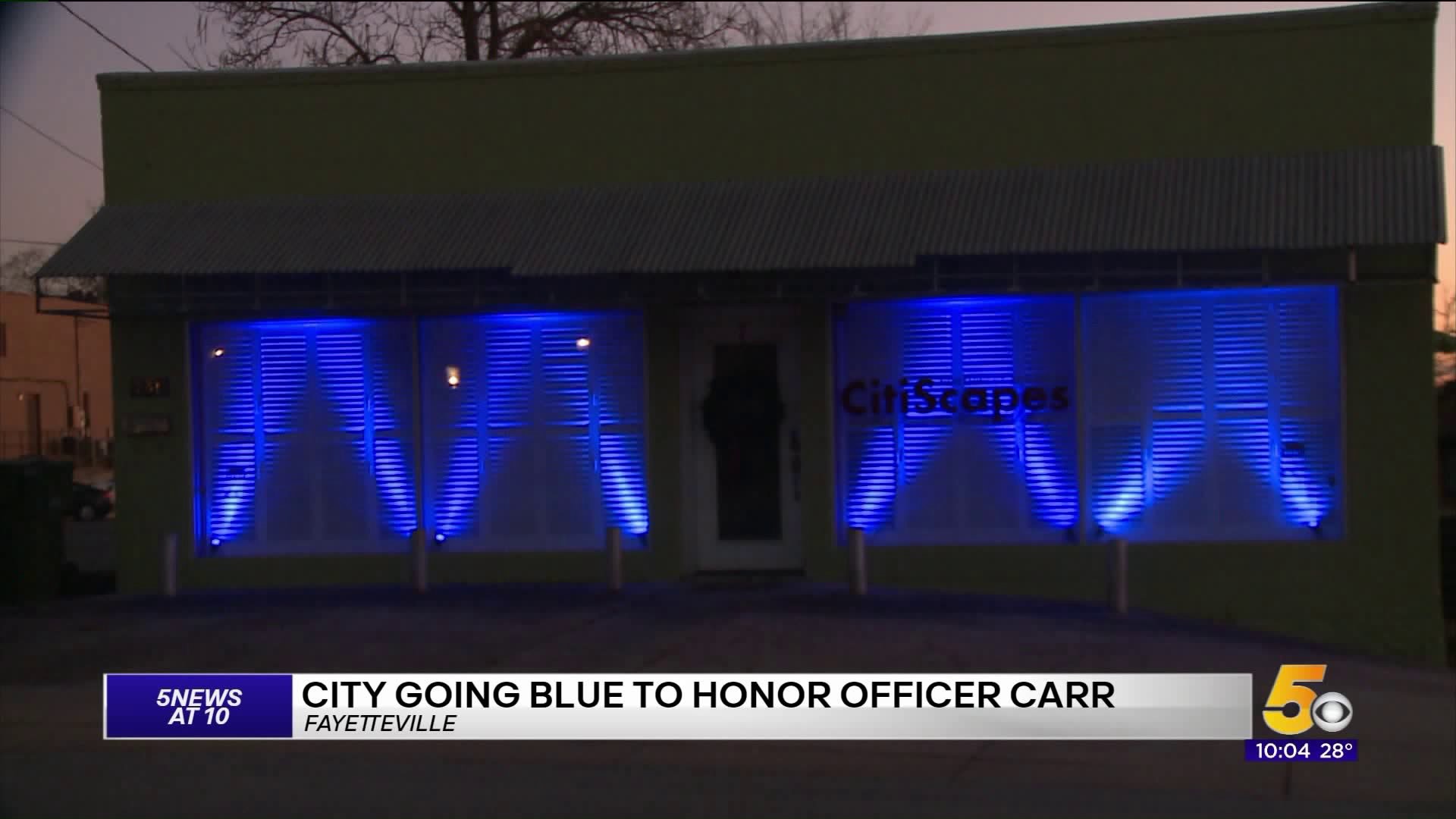 The hashtag #LightTheCityBlue413 began a movement on social media and led the community to shine a blue light in support of Officer Carr.

The blue represents law enforcement and the thin line between good and evil.

Sgt. Anthony Murphy with the Fayetteville Police Department says some stores in the area even began selling out of blue lights over the past few days, something he says just shows the overwhelming support from the community.

“When they stock the shelves with blue lights they probably never guess that they would run out of them so I think it would be cool if the entire city of Fayetteville ran out of blue lights because our citizens were putting them up in their house,” Murphy said.

Razorback Stadium along with many homes and businesses across the Northwest Arkansas area have strung blue lights and have changed bulbs to pay their respects.

Owner of George's Majestic Brian Crowne says it's important to show respect and honor law enforcement at all times, but Tuesday night is important to him to have the building lit up.

“When you see something or hear something that happens it makes you have even more respect for the courage that it takes to put on a uniform every day and go out and protect us," Crowne said.

Crowne says Officer Carr was a member of the George's Majestic family.

“Beat cops are an important part of our neighborhood, you know they aren’t here just to protect us they are here to get to know us, they come in and get to know our staff and you know to lose somebody in the family like that is just tragic,” Crowne said.

Officer Murphy says the 413 in the hashtag represents Officer Carr's badge number he received when he became a police officer. He says it's a number that will never be forgotten.

“413 is what Officer Carr was at the police department and that is who he will continue to be until the end of time and so we just want to honor that number 413,” Murphy said.

Porch light after porch light around town are glowing blue for Officer Carr and his service.

Hundreds of people gathered in front of the Walton Arts Center on Dickson Street to show their support for Officer Carr during a candlelight vigil Tuesday night.

A  GoFundMe has been set up by the Fayetteville Fraternal Order of Police to support Carr’s family.

The funeral service will be held on December 12 at Bud Walton Arena at 1270 Leroy Pond Dr. in Fayetteville at 1 p.m.

Both services are open to the public. Information about parking will soon be released.

Governor Asa Hutchinson has ordered that U.S. and Arkansas flags be flown at half-staff in tribute to Officer Carr.