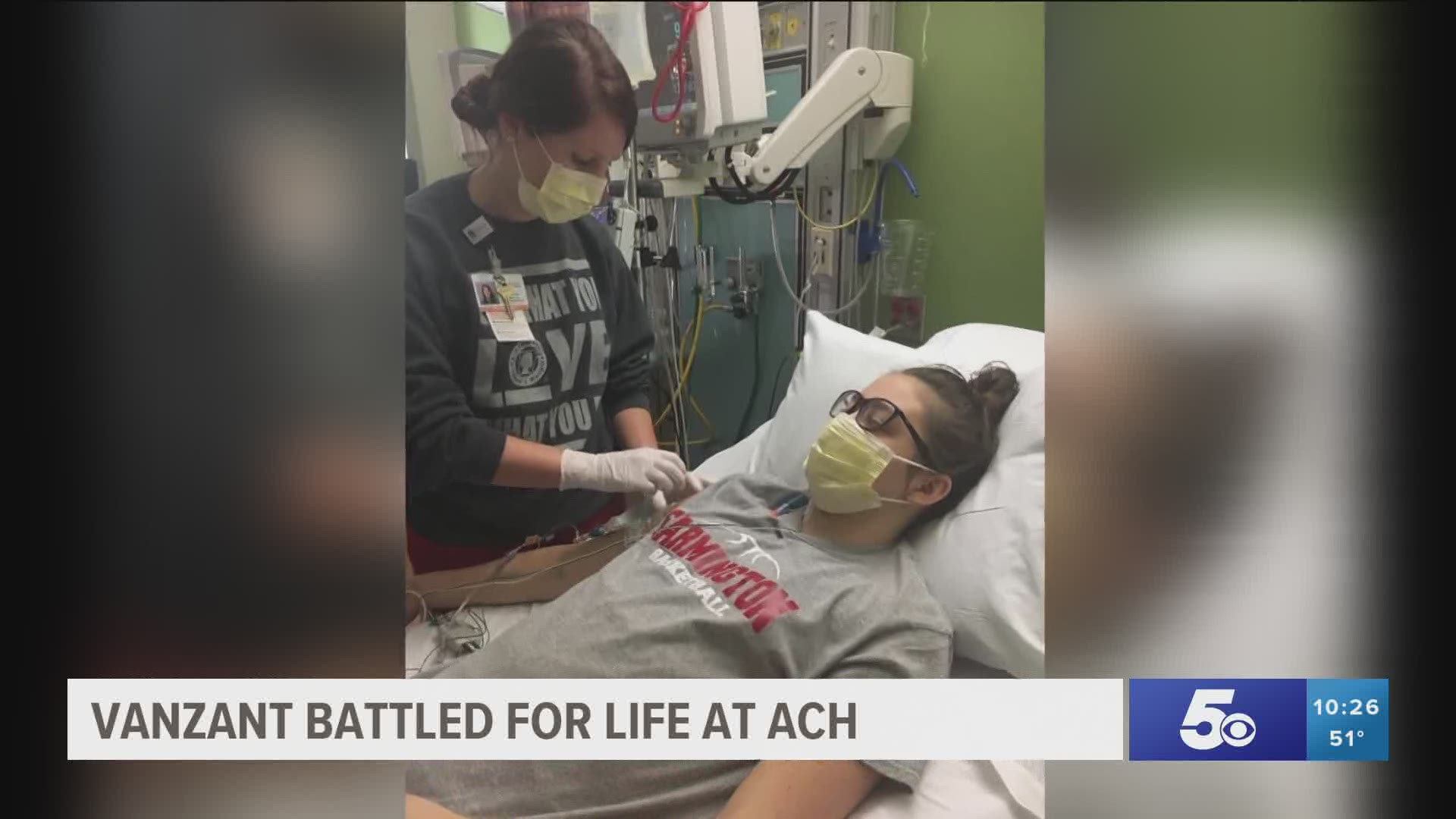 FARMINGTON, Ark. — Every person has moments that shape who they are.

For Makenna Vanzant, Saturday afternoon was one of those instants she'll always remember. Hundreds of hours of work - all coming down to 32 minutes.

The final buzzer, the crowd erupting, and the hopes of ending her senior year with a state championship still alive.

But not every moment has looked quite the one where she secured a spot in the game she's worked all season for.

And perhaps no moment shaped Makenna more than the one that came October 18, 2017.

"It was the night before a Wednesday practice, and my stomach was killing me and I was not feeling great," she remembered. "I'm not the type to miss practice or school or anything like that. I woke up the next morning, I was up all night, and I was like I cannot go."

Upon a trip to the doctor, Makenna learned it was more than just a stomach bug.

"[My doctor] was like, you need to go to the hospital," she recalled. "I went straight from the hospital to them doing a couple test to going straight to [Arkansas] Children's [Hospital]."

At ACH, Makenna's health rapidly started declining. Once she finally got the diagnosis of hemolytic uremic syndrome, her kidneys started to fail.

"I got really emotional because that was the moment of, is she going to live?" Makenna's friend and teammate Joelle Tidwell said of the moment she found out how serious things could be.

The community support came instantly. The very same day Makenna went to the ICU, the school organized a prayer vigil with hundreds of people showing up for encouragement.

"When people go through struggles here in Farmington, everybody goes through it together," Coach Johnson pointed out.

The support stretched further than Farmington - with #22strong picking up momentum all throughout Arkansas and even outside the state.

"It became so much bigger than our story but a story of overcoming, a story of hope, and something of someone that we love that we want to get better," Joelle said of the experience. "I think everyone relates to that."

From there, the switch flipped.

"One day, my numbers - they had no idea why - my numbers just started going up instead of down," Makenna mentioned.

All to the point of being released from Children's on her 16th birthday. Just three weeks later, she got the moment she didn't know if she would ever have again.

"I turned and said okay, it's your turn to go," Coach Johnson said of her first game back on the court against Prairie Grove. "She couldn't get her warmup jersey off fast enough and sprinted off the bench and she went right in. Within a minute or so, she scored her first basket back."

"From that point on, it was just back to work as usual for her," Coach Johnson added. "We tried to slow her down, and she wouldn't."

For two and a half years, Makenna's molded from a patient with a life-threatening disease to a playmaker for the Cardinals. Now, her senior year, she'll walk onto the court in Hot Springs to play for a state championship.

"I'm sure when I'm playing in that game, I'll have a moment where I'll look at her and go like there was a time where I didn't know if there was something that we got to do, but here we are together getting to do this," Joelle said about looking forward to the title game.

Against all odds, Makenna's strength proved everyone wrong, showing that she'll never back down from any challenge thrown her way.

"It was a miracle," Coach Johnson concluded. "That's what it was. If we can finish this thing up right, it will be a storybook."

Makenna and the Lady Cardinals will play to take home a trophy this Friday. Tipoff against Star City is set for 6:00 PM in Hot Springs.