The Razorbacks will lose four non-conference games including a trip to Notre Dame. 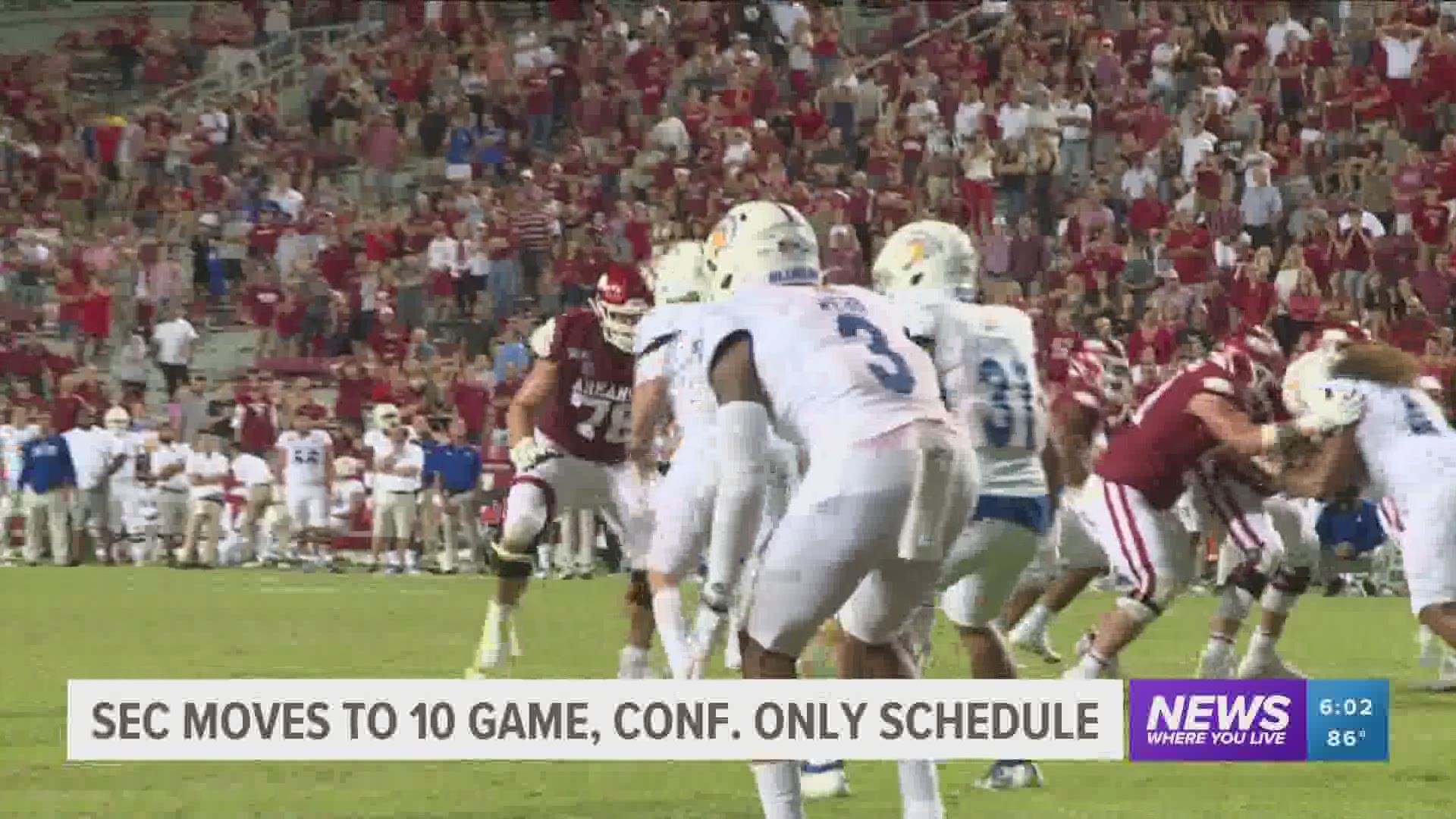 FAYETTEVILLE, Ark. — The domino has officially fallen on the SEC football season.

Multiple reports on Thursday afternoon have the conference moving the 2020 season to a conference-only schedule and will allow teams to play 10 games against SEC opponents, up two from the normal eight. All non-conference games will be canceled.

Arkansas was scheduled to kickoff their season on Sept. 5 against Nevada as well as face Notre Dame, Charleston Southern and ULM but those games will not be played.

“Throughout this process, we have worked collectively and diligently as a conference to pursue the opportunity for student-athletes to compete in their respective sports, while maintaining the health, safety and well being of student-athletes, coaches, staff members and fans,” Arkansas Vice Chancellor and Director of Athletics Hunter Yurachek said. “Overwhelmingly, our student-athletes at the University of Arkansas have indicated that they want an opportunity to compete. The thoughtful plan announced today by the SEC will allow us to push back the start of the football season, while also providing the ultimate flexibility to accommodate a 10-game conference schedule. There are still many details to be worked out, but this is a positive first step in allowing us to work toward a return to competition in a safe and appropriate manner.”

For the Razorbacks, it comes as a blow for first year head coach Sam Pittman as a SEC only schedule will make it difficult for Arkansas to accumulate wins. The Hogs have won just four games in the past two years, none against SEC opponents.

Arkansas was already scheduled to have home games against Alabama, LSU, Tennessee and Ole Miss, road games at Auburn and Mississippi State along with pair of neutral site games against Missouri and Texas A&M. The SEC has not announced who the other two games will be played against.

If the games are to be added by the next two cross-divisional opponents who the Razorbacks would face, then Arkansas would take on Georgia and South Carolina.

Statement from Head Coach Sam Pittman regarding today’s news from the SEC:

“The most important part of all of this is keeping our student-athletes healthy and safe. I think this plan accomplishes that while giving our players the chance to compete. I’m so appreciative of Hunter, Chancellor Steinmetz, Commissioner Sankey and administration from around the league and the SEC for their long hours and efforts to ensure our student-athletes are safe and healthy while getting the chance to compete this fall. Our staff is already working on plans to get our team ready to go. Our entire program is excited to know we’re going to play football starting September 26.”