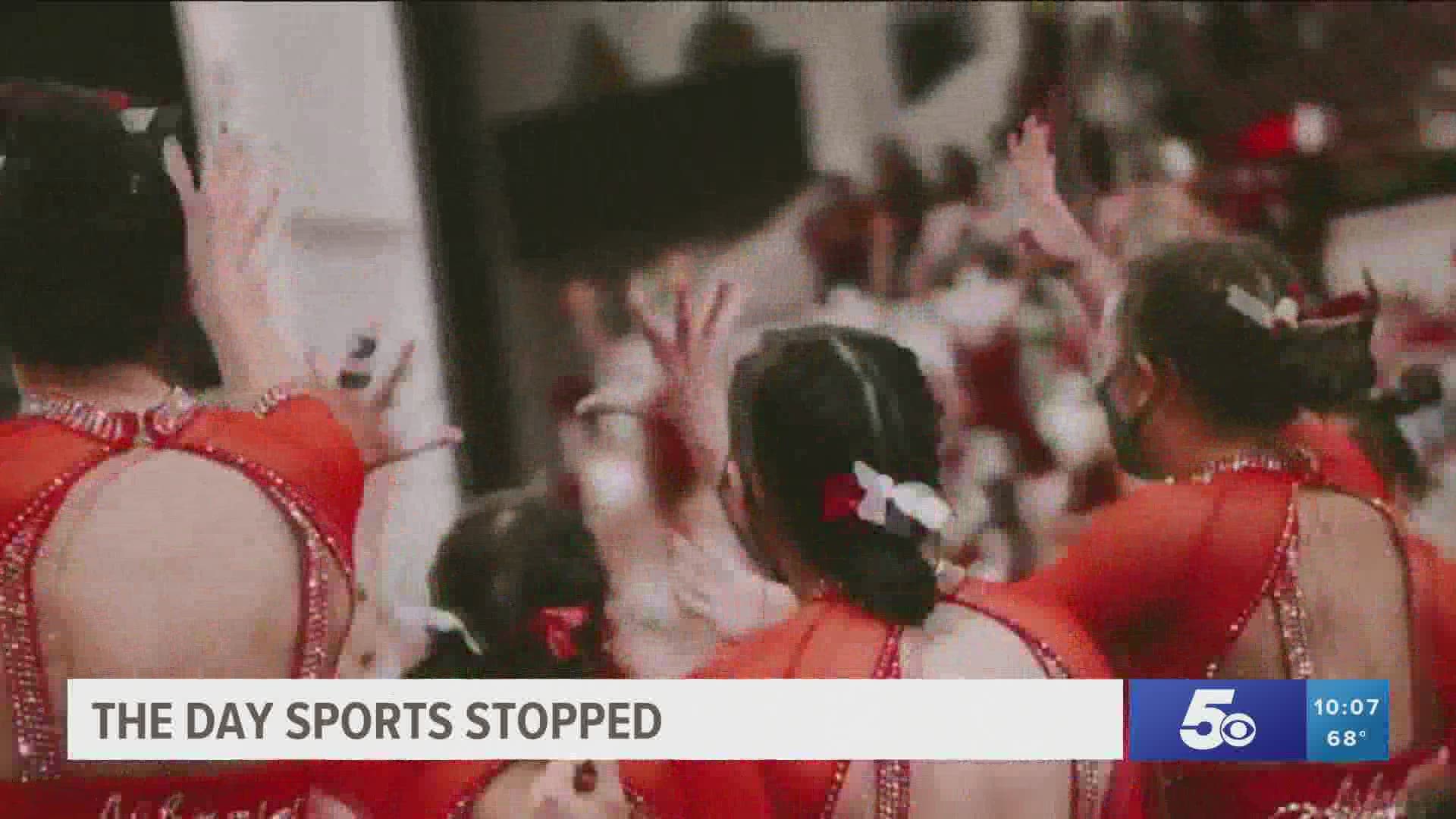 FAYETTEVILLE, Ark. — Sports is a constant in our lives, something that even for a minute, can bring joy to life's hardest moments.

In March of 2020 fans witnessed something that most haven’t gone through before when the sports world came to an abrupt halt.

“When all this Covid stuff started I said I am not going to believe everything i read or everything I hear," said Arkansas women's basketball coach Mike Neighbors.

In March of 2020, the Arkansas women were done with the SEC Tournament and Mike Neighbors was days away from taking the Hogs to the NCAA Tournament for the first time as head coach.

Rumors of tournament cancellations began to swirl throughout the sports world.

“I just said I can’t see them doing it and I remember someone specifically saying he’s in the know he’s on these committees you guys are going to play," said Neighbors.

Down the hall, first year gymnastics coach head Jordyn Wieber was one meet away from wrapping up a successful regular season and heading to the SEC Tournament.

“I remember seeing it in the news a little more and asking our athletic trainers if we should be concerned about this?" said Arkansas gymnastics head coach Jordyn Wieber.

Just days later on March 12th, 2020 the NCAA cancelled all sports for the remainder of the spring semester.

“It was empty it was just this emptiness," said Neighbors.

“You kind of had this feeling of we’ve come this far and now we’re done," said Wieber.

Two coaches, leaders, who spend their days looked upon for guidance found themselves speechless.

“I didn’t have the right words, I had no idea what to say," said Neighbors.

“It challenged my leadership because it wasn’t like I could call up a mentor and say what did you do in this situation?” said Wieber.

During the initial emotion of cancellation, each coach found themselves thinking about their athletes and the effect it would have on their future.

“As a group, as a whole it was hard, I don’t know another word to use for it, it was just hard," said Arkansas women's basketball player Amber Ramirez.

“We all cried together, but I think in that moment there was so much more going on in people’s lives and their health," said Arkansas gymnast Sarah Shaffer.

Amber Ramirez and Sarah Shaffer were two of the hundreds of Razorback athletes who had a year of their athletic career ripped from underneath them.

“We had a great season and we didn’t get a chance to finish it to prove we really belonged," said Ramirez.

“It wasn’t the end we wanted but you have to come to terms with it and look forward," said Shaffer.

The coming days, months and year would bring upon struggle and triumph like we’ve never seen before.

“I do think it helped our kids gain perspective that the game can be taken away from them at any point in time," said Neighbors.

Arkansas Athletics conquered that day and held up their promise of better days ahead. All programs came back stronger than ever and now found themselves competing at the highest level.