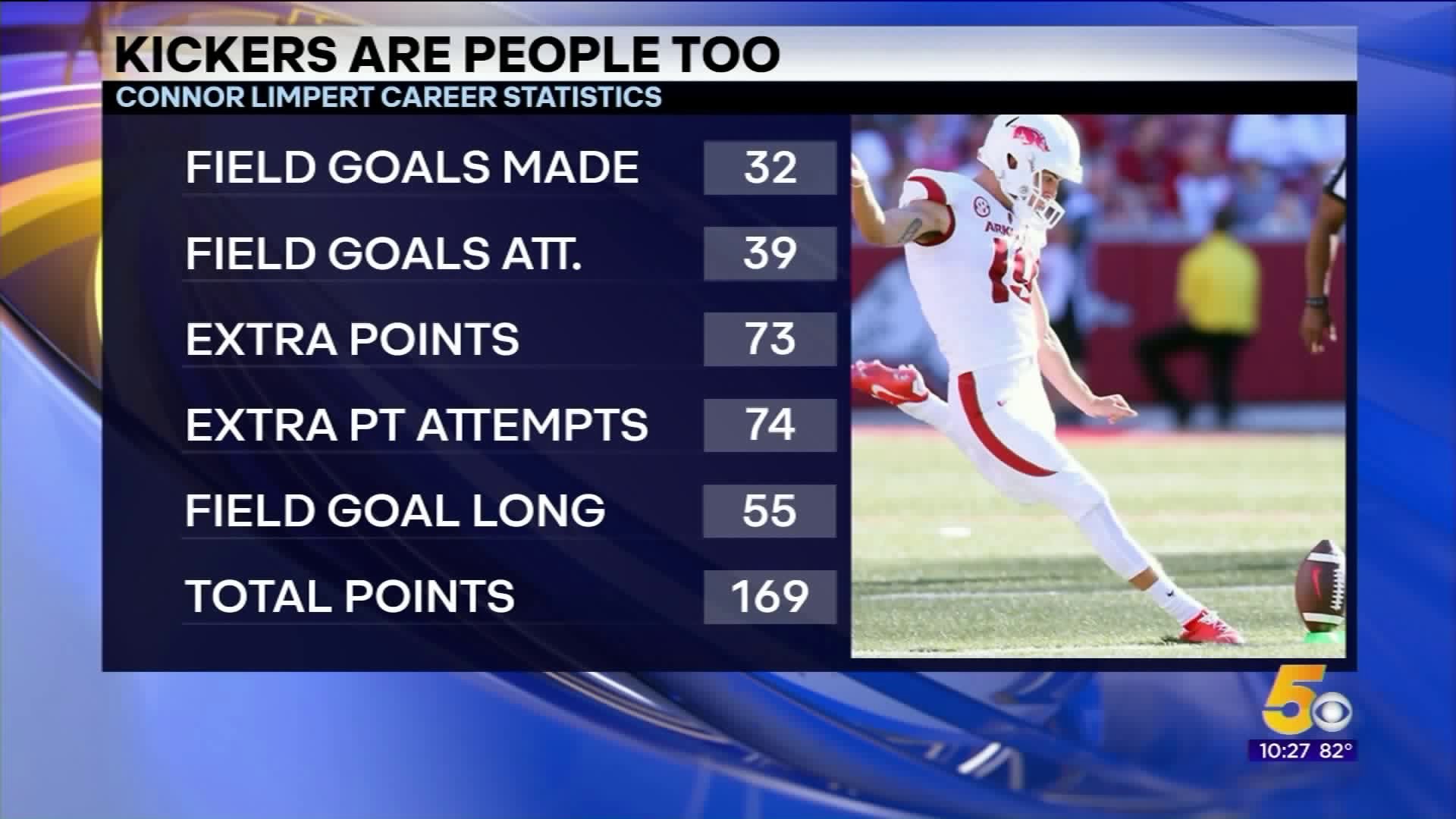 Smaller, leaner, rarely the man involved in the big moments.

But Connor Limpert is continuing to make himself known.

That proved to be true last weekend when he nailed a field goal from 54 yards out - earning him SEC special teams player of the week honors.

“I never hesitated at all sending him out there to kick that field goal," head coach Chad Morris explained. "We’ve got great confidence in him. He’s been in this situation before. I think that has a lot to do with it, I think his confidence in himself is continuing to grow.”

“I’m going to be honest, I was a doubter," offensive coordinator Joe Craddock added. "I didn’t know if he could hit it, and he drilled it. I think the ball hit the Hog Pen back there. It hit the fence. He killed it. I think it would’ve been good from 60-plus.”

Connor enters practice this week smiling as usual. After all, he knows these memories can slip away at any moment.

And he knows just how precious every moment can be.

Connor looked down and fidgeted his hands while memories while he thought back to his senior year of high school. "I got a call from my family that my dad got rushed into a hospital," he remembered.

Connor’s dad, Scott, entered his indoor soccer game on July 17, 2015 just like he would any other day.

But this time - he wouldn’t come out.

“Honestly, I didn’t even know how serious it was going to be until one of my friend’s dads drove me, and he was like running red lights and doing all that and driving as fast as he could," Connor recalled of the dreaded day. "At that point, I knew it was something serious.”

A sudden heart attack, and in an instant, Connor’s life forever changed.

“To me personally, I think it’s made me a lot stronger person," he said about his outlook of life without his father. "It made me grow into a man a lot quicker and become the man of the house for my mom and my sister.”

“He was the biggest reason why I even got to kick in front of Coach B and get a chance to be here," Connor mentioned of his dad helped him get to the University of Arkansas. "Knowing he helped me get here makes me feel ever better that I’m taking advantage of the opportunity.”

Now, Connor runs onto the field every week in the same number his dad always wore - #19.

"With him being gone, 19 just represents me or my mom or my sister seeing him around," he explained of the legacy. "Anytime we see that number, it’s the best feeling. No matter where I am, I know he’s watching down on me. But having him actually on my back is a great feeling.”

It’s easy to imagine Connor’s dad would be proud. From walk-on to SEC honors, the senior has hit 32/39 field goals for an 82 percent completion rate, and has only missed one extra point attempt - which came in his sophomore year.

To wear "Arkansas" across his chest is one thing. To sport "Limpert" and the number 19 - that's all part of the family legacy Connor fights to uphold with every kick.