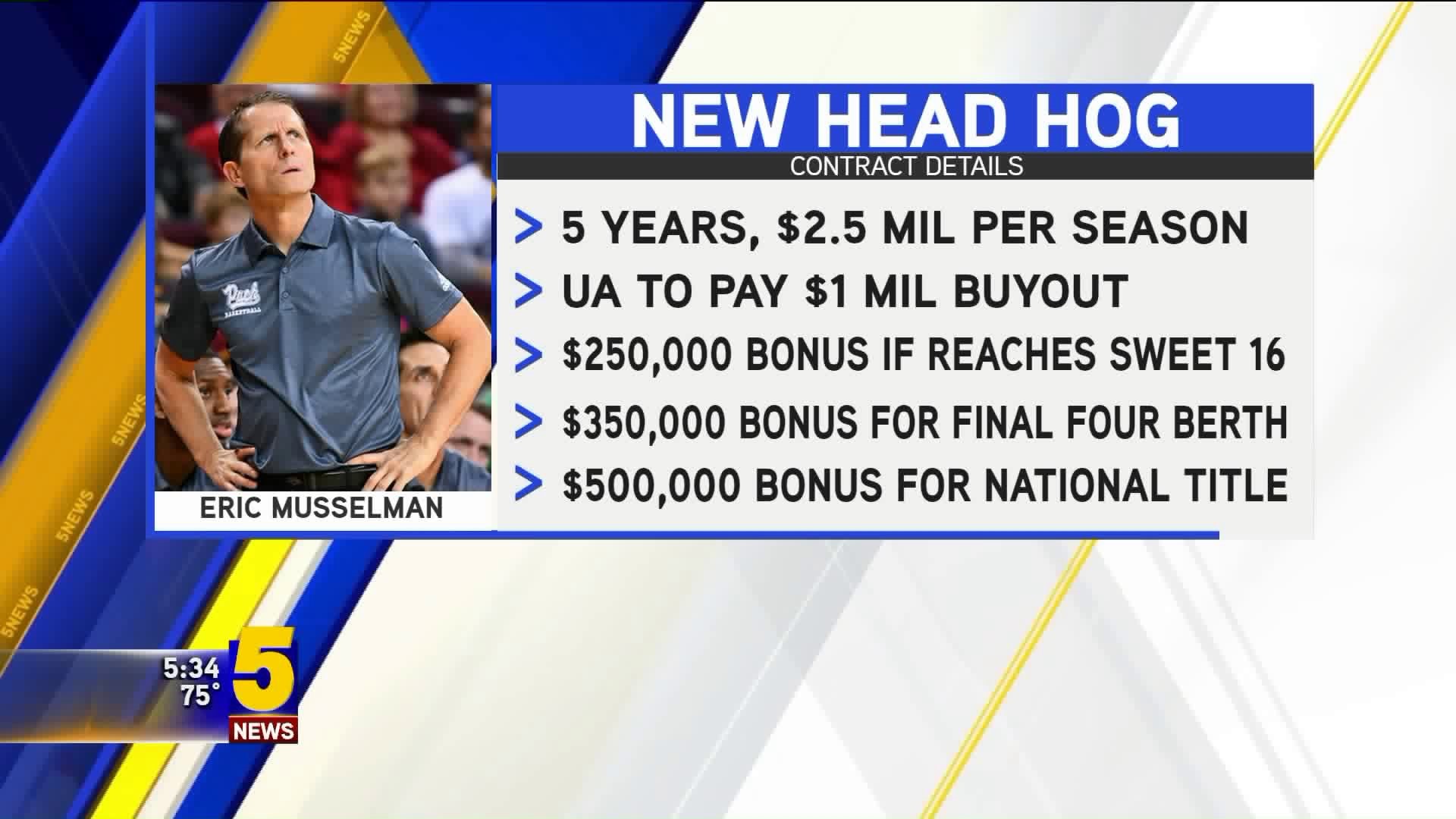 FAYETTEVILLE (KFSM) - He emerged as the contender near the start Arkansas coach search and the Razorbacks were finally able to land a big name in college basketball after more than 10 days after firing Mike Anderson.

Eric Musselman has been hired as the next Arkansas basketball coach after he spent the past four seasons at Nevada. He led the Wolf Pack to the NCAA Tournament in each of the past three seasons and won 110 games during his time at Nevada.

I am excited to officially announce the hiring of Eric Musselman as our new Head Coach for @RazorbackMBB. And to welcome his wife Danyelle, their daughter Mariah and sons, Matthew and Michael to the Arkansas Razorback Family. #OneRazorback pic.twitter.com/ydHjNwG2UY

“Eric Musselman is a coach that has had experience at every level of basketball from the NCAA to the NBA,” Yurachek said. “He was practically born into the game and his passion for basketball is unmistakable. He has been successful throughout his career, including the remarkable job he did in returning the University of Nevada into a perennial NCAA Tournament team. Coach Musselman is high-energy and possesses an extremely high basketball IQ. He has a great attention to detail and has structured his programs to develop players individually while building a successful team. I am pleased to welcome Coach Musselman, his wife Danyelle and his family to the Razorback family.”

Musselman made his name in the NBA as he spent a decade in the pro game, including stints as the head coach for both the Golden State Warriors (2002-04) and the Sacramento Kings (2006-07).

Arkansas will pay Musselman $2.5 million per season and gave their new coach a five year contract that is laced with incentives. Musselman would receive $250,000 for a Sweet 16 appearance then would receive an additional $350,000 for a Final Four berth. If Musselman leads Arkansas to a national championship, he would get a bonus of $500,000.

“My family and I couldn’t be more excited to be coming to the University of Arkansas,” Musselman said. “The opportunity to be a part of the rich tradition of Razorback Basketball and to experience the passion of the Razorback fans is something that I am very much looking forward to. I am appreciative of the professional manner in which Hunter Yurachek conducted the search and am grateful for the support of Chancellor Steinmetz and all of those affiliated with the University of Arkansas. I am ready to get to work with our student-athletes to prepare our program to compete at the highest level of college basketball.”

After spending a few years out of coaching and then two more as a head coach in the G-League, the NBA's developmental league, Musselman was an assistant coach at Arizona State for two seasons before joining the LSU staff for one season prior to taking over in Reno in 2015.

Musselman never won fewer than 24 games in his four seasons with Nevada as he won the College Basketball Invitational (CBI) in his first season and then reached the NCAA Tournament the next three years. The Wolf Pack were a No. 7 seed in this year's tournament after going 29-4 in the regular season and won the Mountain West Conference regular season title for the third straight season. Nevada lost to Florida in the opening round.

His NBA coaching career didn't see much success as he led two of the worst franchises during the 2000s. Musselman went 75-89 in two years with the Warriors while going 33-49 in his one season with the Kings. Musselman did finish runner-up to Greg Popovich for the NBA coach of the year in his first season with the Warriors after winning more games than the team had in a decade.