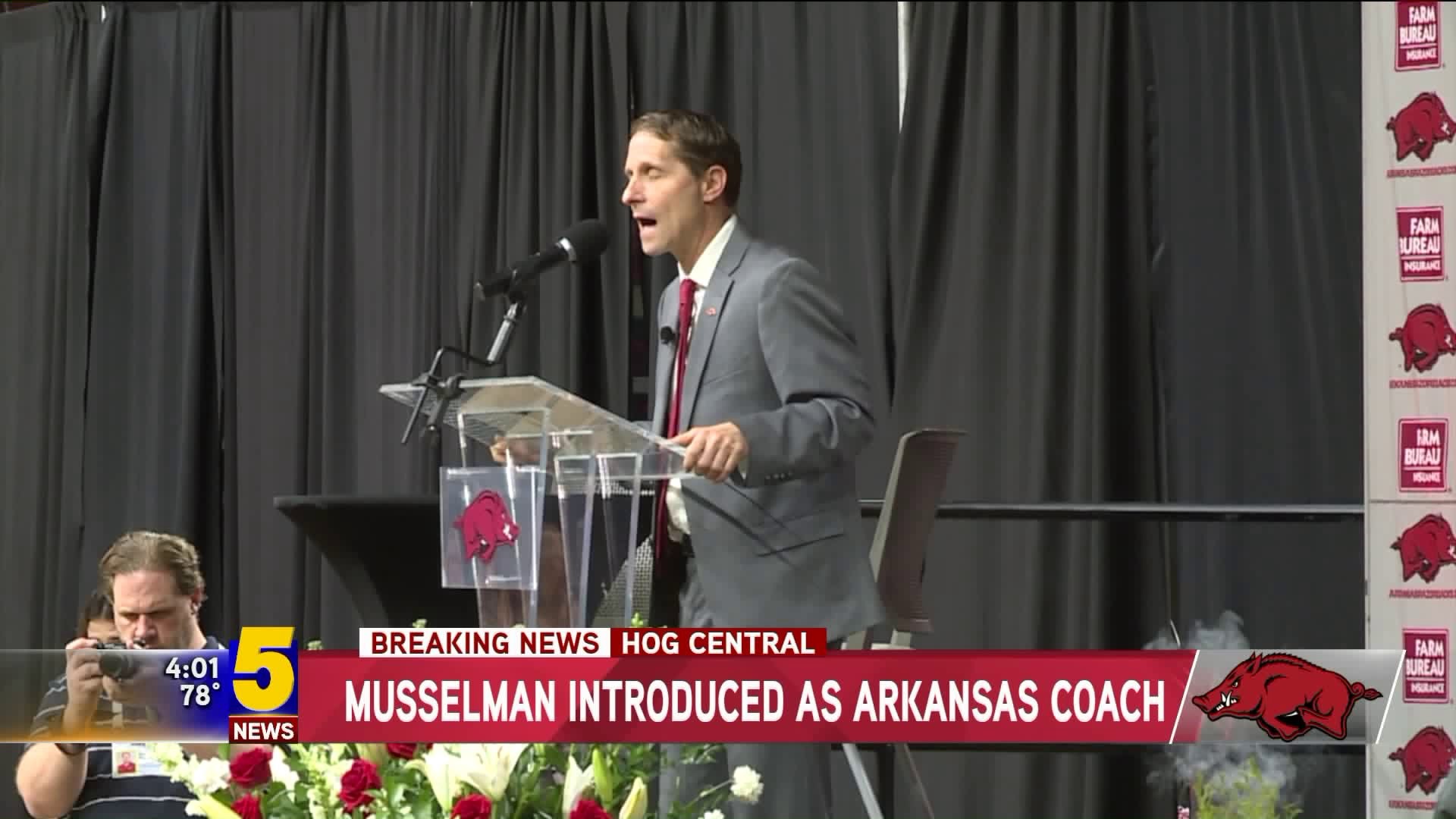 The feeling was definitely mutual.

Razorbacks athletic director Hunter Yurachek spoke, the fans called the hogs and then Musselman and his family were introduced as T.I.'s "Bring 'Em Out" blared over the sound system.

Musselman said he was ecstatic to get the call from Yurachek. It helped that Musselman's wife, Danyelle, has Arkansas ties (her father is from Magnolia).

"After our first phone call, I put the phone down and told my wife I was going for a five-mile run and I sprinted out of the house," Musselman said. "That's how excited I was about getting that initial phone call."

Musselman thanked Nevada's administration and players and said he hopes he gets the same level of buy-in at Arkansas. The 54-year-old led Nevada to three NCAA Tournaments in four years after a nine-year absence. The Wolf Pack reached the Sweet 16 in 2018, but lost in the first round to Florida this year.

Before that, Musselman coached the Sacramento Kings and Golden State Warriors in the NBA and had stints in the CBA and D-League, along with assistant jobs in the NBA and college.

Now, he's committed himself to becoming familiar with Arkansas basketball. He met with the current players on Sunday night and has been in contact with former Arkansas players Corliss Williamson, Patrick Beverley, Tony Brown and Corey Beck.

Arkansas still is trying to get back to the level established by Nolan Richardson, a Hall of Fame coach who won the 1994 national title. Musselman said he looks forward to coaching on the soon-to-be-named Nolan Richardson court. Musselman knows all about Bud Walton Arena — he spent time as an assistant at LSU.

"Feeling the passion of the fans here is second to none," he said. "And you know what? We need you guys. We really do."

Musselman replaces Mike Anderson, who went 169-102 and made five postseason tournaments in eight seasons, including three NCAA Tournament berths. Arkansas went 18-16 this past season, ending with a loss to Indiana in the second round of the NIT Tournament.

"Sometimes, it seems like an eternity in these search processes," he said. "But for me, this was not a race to the finish line, but rather that it was imperative that we not only took the time to find a great basketball coach, but also that we find a coach who truly wanted to be here and one who truly understands what we are about in this state and the expectations that we all collectively share for our men's basketball program."

Musselman takes over a team with plenty of experience, but star forward Daniel Gafford won't be among them after declaring for the NBA draft.

Gafford was the only player in the SEC in the top five in scoring (16.9 points per game) and rebounding (8.7 rpg) last season. Guard Isaiah Joe is expected to return after averaging 13.9 points and shooting 41.4% from 3-point range as a freshman. Mason Jones averaged 13.6 points this past season as a sophomore and another guard, Jalen Harris, averaged 5.4 assists as a sophomore. The guards fueled a squad that averaged 75.3 points per game.

Musselman's offense will emphasize shooting threes and getting to the free-throw line. There will be great freedom on offense and a very structured defense.

He hopes the fans and players enjoy it.

"We're going to give you an incredible amount of effort, energy and enthusiasm when we play," he said. "Hopefully our brand, our style of play — we like to call it pace and space — hopefully, it will be something you guys really, really enjoy to watch."