The University of Arkansas plans to return to full capacity inside Donald W. Reynolds Razorback Stadium this fall. 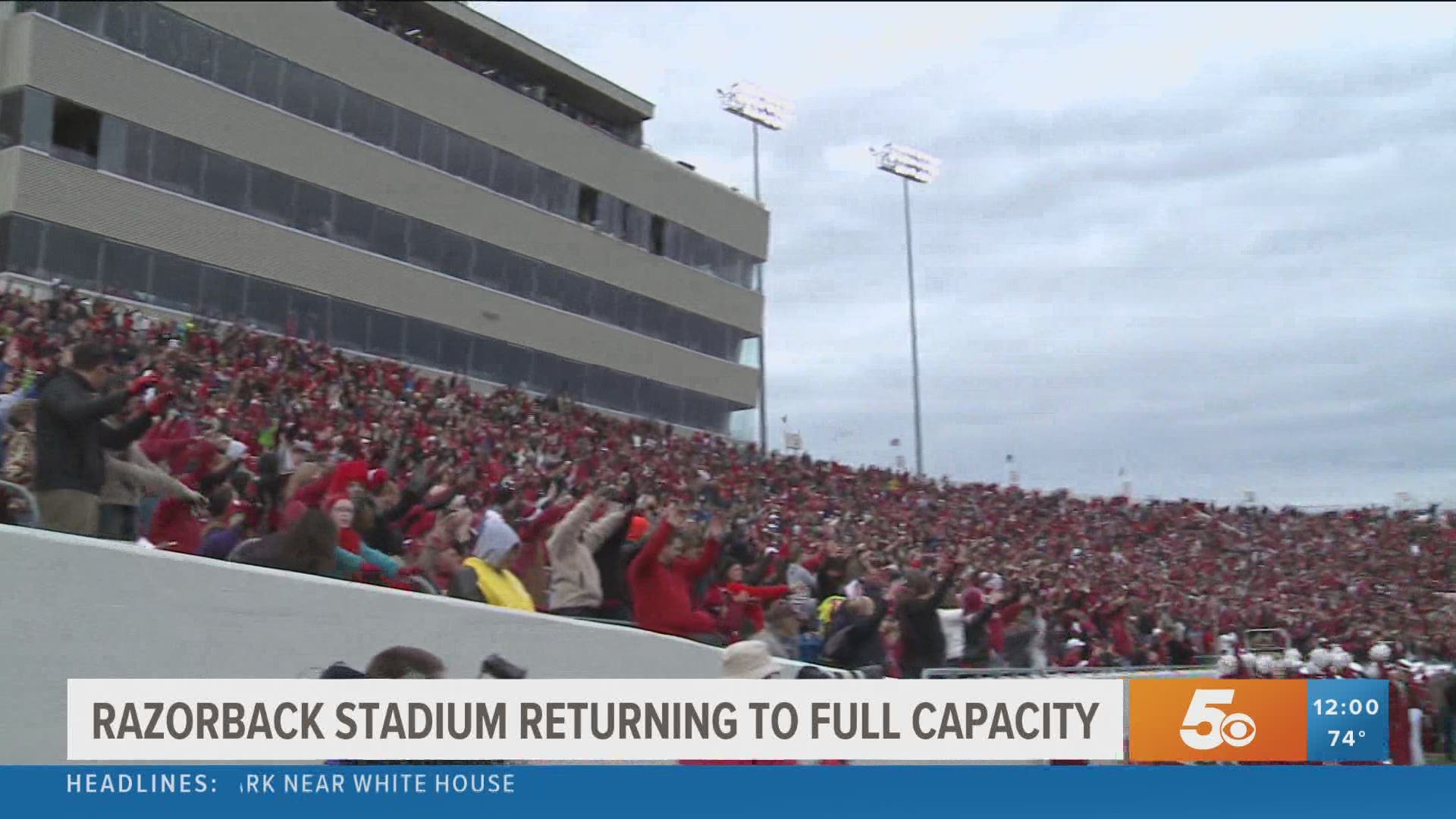 FAYETTEVILLE, Ark. — The University of Arkansas plans to return to full capacity this fall inside Donald W. Reynolds Razorback Stadium and at all athletic events.

The full pageantry of a college football game day will be restored in Fayetteville this Fall.

Along with full capacity inside the stadium, tailgating and HogTown return to pregame festivities for Razorback fans. Featuring live music, food trucks and family activities, HogTown returns as the go-to spot for fans prior to games at the corner of Razorback Road and Maple Street.

Head Coach Sam Pittman will lead the Razorbacks down the Hog Walk after the team’s arrival then out through the A on the field prior to kickoff. Halftime performances return as well with the band and cheerleaders performing on the field.

Coach Pittman begins his second season atop the Arkansas program after restoring pride in the team during his first season.

The Razorbacks open the 2021 campaign with a pair of former Southwest Conference foes in Rice and Texas. The Hogs and Owls kick off the season on Sept. 4 in Razorback Stadium at 1 p.m. on SEC Network+. The Longhorns return to Fayetteville for the first time since 2004 on Sept. 11 to renew one of the Razorbacks’ oldest rivalries in prime time on ESPN at 6 p.m. Fans will be asked to stripe out DWRRS in red and white for the match-up with the Horns on the 20th anniversary of 9/11.

Arkansas welcomes Georgia Southern on Sept. 18 during Family Weekend at the University with game time scheduled for 6 p.m. on SEC Network. A year after the two teams met in College Station, the Hogs return to AT&T Stadium on Sept. 25 to take on Texas A&M. Homecoming is set for Oct. 16 against Auburn after the Razorbacks return from back-to-back road games at Georgia (Oct. 2) and Ole Miss (Oct. 9).

Arkansas hosts a Salute to Heroes at War Memorial Stadium in Little Rock when the Hogs take on UAPB (Oct. 23) then will honor the military on Nov. 6 when Mississippi State visits Fayetteville. The Razorbacks end the regular season with road games at LSU (Nov. 13) and Alabama (Nov. 20) before wrapping up the schedule with the Battle Line Rivalry against Missouri (Nov. 26).

Season tickets are available now and can be purchased by visiting arkansasrazorbacks.com or by calling the Razorback Ticket Center at 479.575.5151.