Poteau and Vian strive to return to title games, while a host of other teams look to take the next step 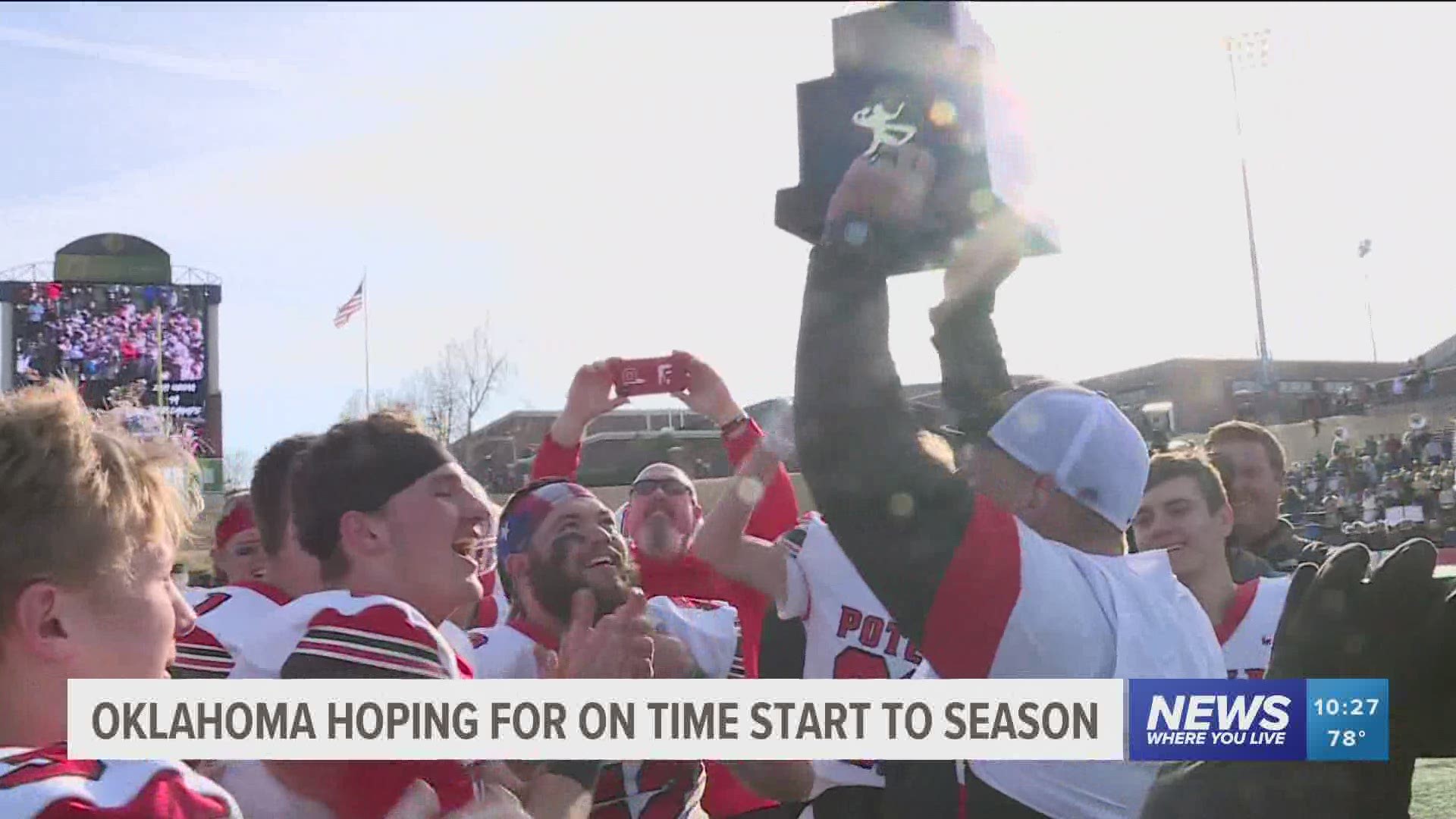 OKLAHOMA, USA — Talk to any coach and they’ll tell you, they’re approaching every day at practice as if Zero Week is right around the corner. We’re going to do the same here at 5NEWS as we get you ready for Football Friday Night. More schools will be added to the story as we get closer to the season.

“Who would have thought something like this would ever happen?”

“They drove me nuts through the time we were off.”

“That old saying you never know what you’ve got til it’s gone, that’s what it was.”

Coaches and players alike were grateful to finally get to workout and practice together again after months in quarantine. Unlike in Arkansas, Oklahoma high schools have been free of statewide restrictions, and have spent the last few weeks participating in team camps and 7-on-7’s. After so much time off, teams are hungry to get the season underway.

Sallisaw broke a two- year playoff drought last year, and did so in gritty fashion. That’s par for the course for a Black Diamond squad that won five games last season by a single score, and it’s that identity that coach Randon Lowe is seeking to embrace

“That’s just who we are here at Sallisaw, it’s who we’ve been since world war two. We’re not going to be the fastest team, never have been never will be. But we’re going to try and do is outwork people, out tough people.”

When you’re talking 4A-4, Lowe knows who sets the standard.

The Pirates, of course, are coming off a championship season. These are kids who know how to win, and won’t rest until they add another golden ball. Motivation isn’t something head coach Greg Werner worries about.

“We’re dealing with a lot of kids who have won before, so that part’s pretty easy, we’re just dealing with putting pieces back in the puzzle. Our kids have a great work ethic, that’s never an issue around here. This might sound weird, but we don’t talk about it (the state championship). The trophy is in our locker room, but we don’t talk about it”

At the 2A level, it’s another school coming off a title appearance that everyone’s gunning for.

“Well you’ve got Vian, they lost a lot but they bring a lot back.”

“Vian, they’ll probably be ranked number one in the state.”

For the Wolverines, after coming so close a year ago, it’s all about correcting the little things, making sure that the one or two plays that could turn a state title game go their way this time around, says coach Gary Willis.

“There’s things we could have done different and that’s where the motivation comes in, where did we hurt ourselves, not what did they do to us, what can we change about what we did, the turnovers and that kind of thing. So we don’t beat ‘em to death with it, it’s good motivation to know how close they were.”

In the same district, you’ll find a Pocola squad that got its first taste of winning under coach Jason Parker last season. Now, with hopefully a full healthy season from star quarterback Jaxton Rutledge, the goals are even higher, says Parker. Look for a team that runs deep at wide receiver and now has a year’s worth of experience running the spread to try and light things up offensively.

“This is definitely the most talented team I’ve coached since I’ve been here, most focused, but we’ve done all these other things, the potential is there, but we’ve gotta go win.”

Of course, the Indians and Wolverines also have to deal with perennial power Spiro. Quarterback Nick Johnson was adjusting to his new role last year and still won 8 games. His improvements this year will be key.

“He’s a lot stronger now than he was last year, and he’s tuning in mentally. But there’s a big difference between being a starting quarterback and a backup quarterback, and he got his feet wet last year, this year, we expect him to step up.”

The year before Brandon Tyler took over at Gore, the Pirates won just three games. Last year, that number ballooned to ten wins, and now in year four, the foundation is fully there, and it’s time to make a playoff push. Numbers are up, enthusiasm is up, and the team is ready to build beyond last year’s playoff exit.

“They’re hungry, and we want to get to that next step. Fell a little bit short last year, but the kids are working hard and excited to get back to that opportunity again this fall.”

Every coach is united in at least one thing: Oklahoma communities want to see football on Friday nights this fall.

“I think it’s of the utmost importance,” says Werner, “it brings a lot of pride to our community, and no matter how good or bad we’re going to be, they want to get back to Poteau football.”

“You look at our country and see how divided it is right now, and sports has always been that thing that can bring us together,” adds Tyler. “To see everybody, too see those faces again, I think it’s really important to get back to that in the fall.”

Football is essential in Sallisaw,” says Lowe. “It’s not essential, everywhere else, but there’s a lot of towns where it is. It would mean so much to our kids to get to play football. We can stream it. It’s 2020, it’s color and everything.”

“Football is such a big thing in Vian,” explains Willis, “it holds them together, gives them something to look forward to.”

“Especially the seniors,’ adds Bunch. “They saw what happened last semester, and they appreciate that nothing is guaranteed.”

For now, Oklahoma high school football season is planning an on-time kick off, per the OSSAA.