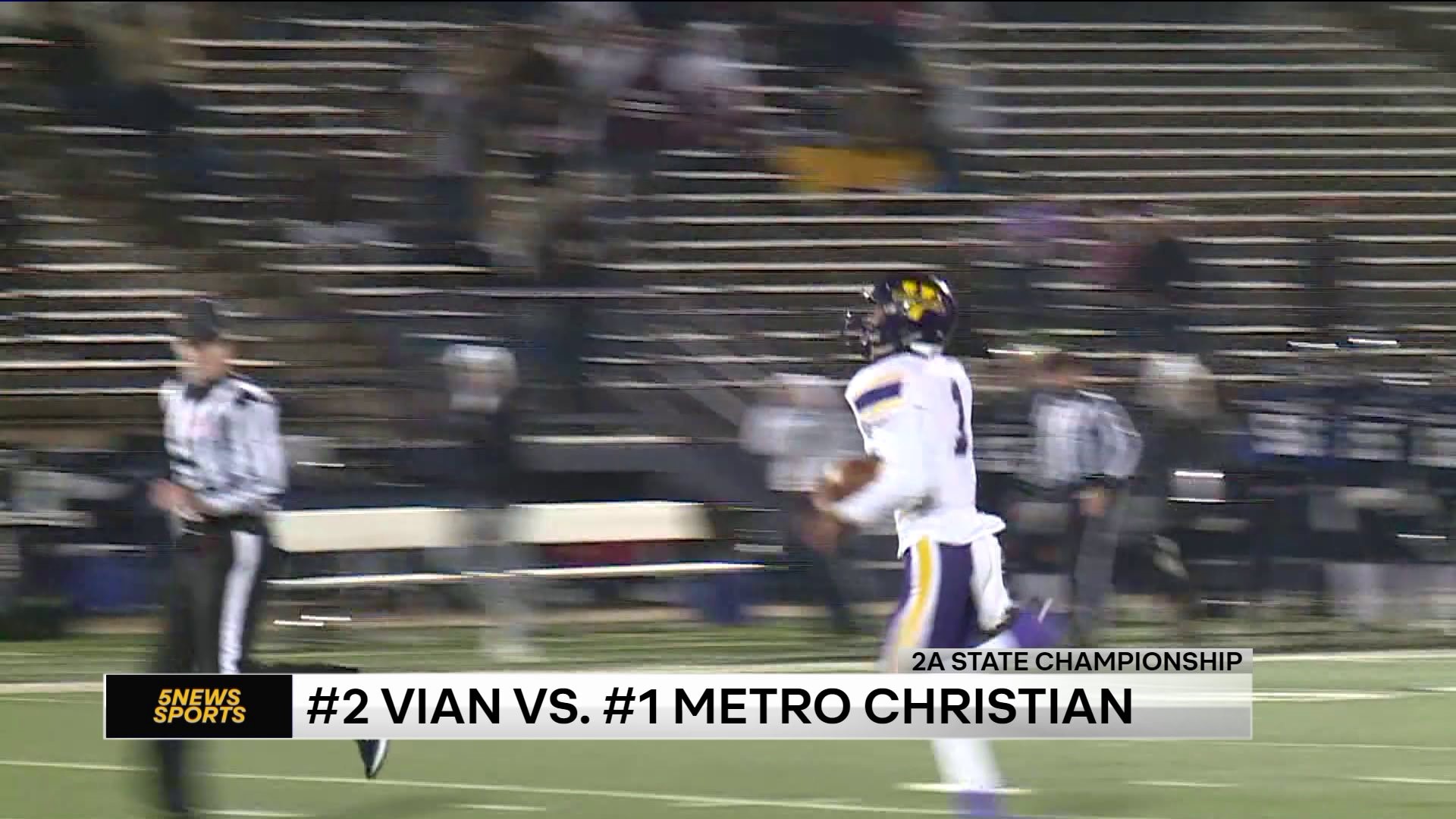 VIAN, OKLA (KFSM) - It was a battle of pass versus run, and ultimately the aerial attack of Metro Christian was too much for Vian. The Wolverines fall to a 42-34 to Metro Christian, giving the Patriots their first ever state title.

From the start, it was clear this would be a clash of offensive styles. Metro completed its first four straight passes, but ultimately had to punt. After a Vian punt, the teams traded fumbles, and Metro took advantage. After a Wolverine turnover, quarterback Asher Link hit Aiden Currivean for a 36 yard score and an 8-0 lead.

In the second quarter, Metro struck again, with Link hitting Carson Callaway for a 37 yard score and a15-0 lead. Then, the Vian run game finally woke up. A bad Metro punt gave the Wolverines field position, and they capitalized, as Gray Cloud scooted in from 8 yards out for their first score of the night.

With less than a minute in the first half, Metro tried a fake punt, but Vian was ready. Again gifted with field position, the Wolverines quickly scored, with Javyn Wright doing the honors this time around. At halftime, the Wolverines trailed 15-13.

After a defensive stand to start the third, Vian struck with the big play. On third and short, Elijah Wright broke free for a 77 yard TD, and Vian led for the first time all night, 20-15. Then, things got wild.

Metro responded on their next possession with a 36 yard TD pass from Link to Currivean. The big play bug struck again, and Vian took the lead right back thanks to 78 yard run from Javyn Wright.

With Vian in the lead 28-22, Metro pulled off some trickery to get inside the five yard line with less than two minutes in the third. Link kept it himself for the short TD run, and after a missed extra point, all tied up at 28-28.

That's how the fourth quarter would start, but not how things would end at all. Vian drove deep into Metro territory, but an untimely interception would be their undoing. The Patriots took advantage and marched down the field, capping things off with a ten yard QB keeper from Link to go up 35-28.

Things started to crumble from there. Link picked off Vian himself with 4:30 left, then took a keeper 65 yards to the house to put Metro up 42-28.

Vian scored with two minutes left to make it a one score game, but Metro recovered the onside kick and bled the clock. It was close, but Vian falls one win short of the ultimate goal.