The second ever championship for the program comes after difficult season 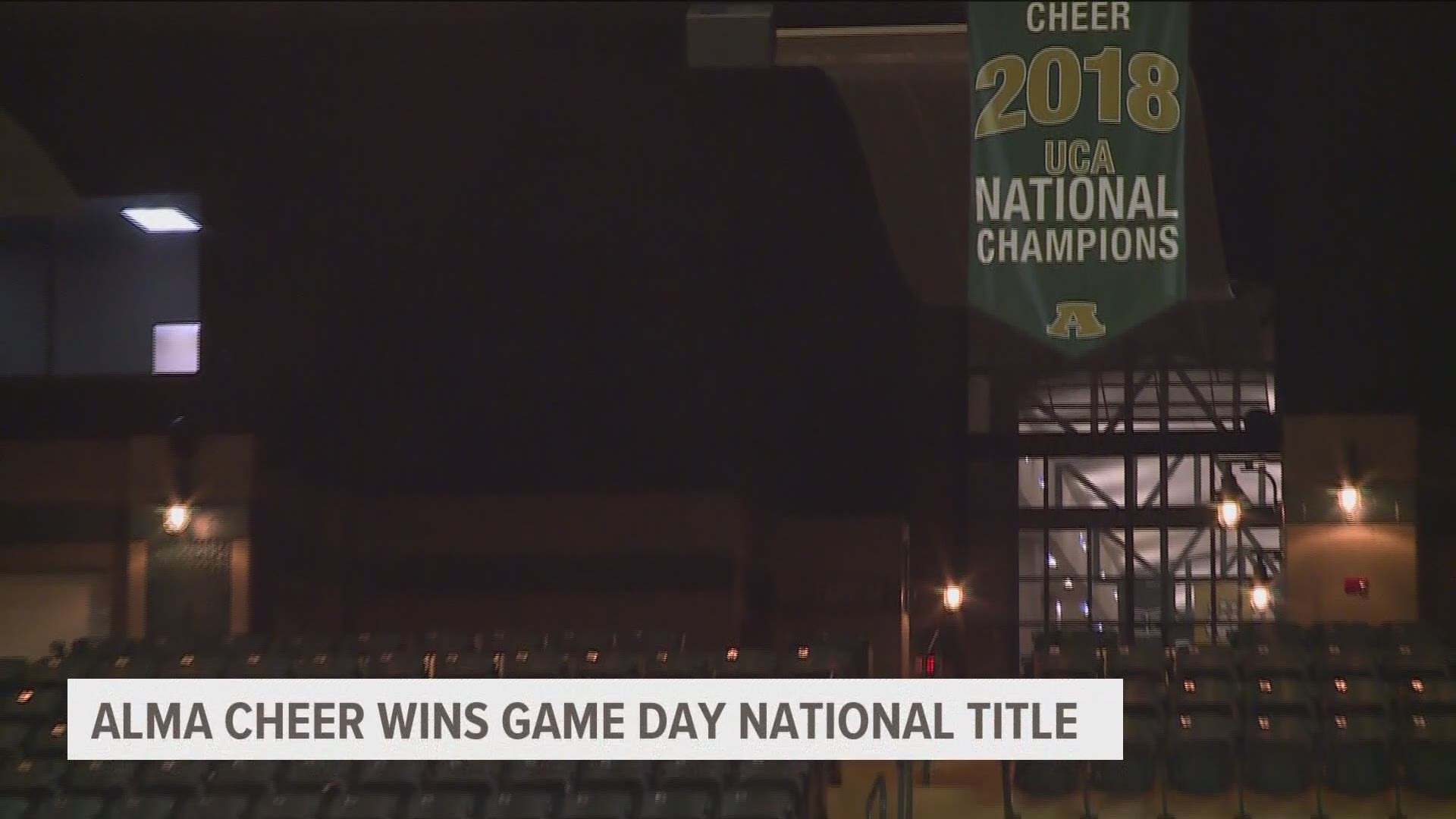 “Alma won nationals our freshmen year, so we’ve been working our entire senior high career to win this.”

But a senior season wasn’t even guaranteed.

“At the end of last year, a lot of us were worried we wouldn’t compete at all this year, or make it through football season.” Hutchinson’s fellow senior, Lydia Bowerman, echoes the sentiment.

“We were just hoping that we would even get to cheer at one football game. So when competition season came around, we were so grateful because none of really thought that we would get to compete.”

Normally a spot at Nationals means a trip to Disneyworld to perform in front of judges. With this year’s competition virtual, Disneyworld came to Alma.

“We had our theater department come out and they dressed up as characters. We invited our community, had a costume contest, a Disney trivia night, our younger tams performed,” explains assistant cheer coach Abby Boster. “We wanted to involve everybody, and we wanted these girls to feel like they weren’t being cheated out of everything.”

Since it was filmed, the team could try the three-minute long routine until it was perfect. It took about 15 tries. Three weeks after filming their final routine, the team gathered together to watch the results

“We knew that we were in the top three, and everybody was screaming. Then they announce third place, and it wasn’t us,” remembers Hutchinson.

In that moment, second place finishes at the last two state competitions were swirling through senior Ansley Kirkendoll’s head.

“It was at top two, like, it was right here, we either win or we lose this time again.”

“We just got dead silent and were like, waiting. Then the called second place and it wasn’t our name…”

That’s when the screaming started. For Bowerman, it was a moment of proof.

“When they called our names, we heard  “Alma Cheer, back on top,” and that meant a lot to us,  to prove to everybody that we could pull out a big win.”

“And now in 2021 they are back on top!” ⁣⁣
•⁣⁣
•⁣⁣
Here is our awards video from Varsity TV. Seniors, you have worked your entire high school cheer career for this moment. Thank you for your leadership and dedication to our program. We finally did it! #only1airedale pic.twitter.com/Mu4Dl5L5GX

Kirkendoll reflected on the legacy aspect of the win.

“There’s so many banners in here, just to know that one of them belongs to me is a really good feeling.”

For all the seniors, the event’s of the last year just made this that much sweeter.

“I think COVID taught me to savor every moment.”

“We’ve had a lot of things taken away from us, so just going out our senior year with a national title is pretty awesome.”

And head coach Christy Law is beaming with pride.

“These seniors have been through a lot this year, but they’ve stayed positive, they’ve showed true leadership, it just makes me really proud that they’re the ones who got to have this national championship this year.”