10 people who restored our faith in humanity in 2020

In the unprecedented year of 2020, there were a few people who did some extraordinary things to make the world a better place. 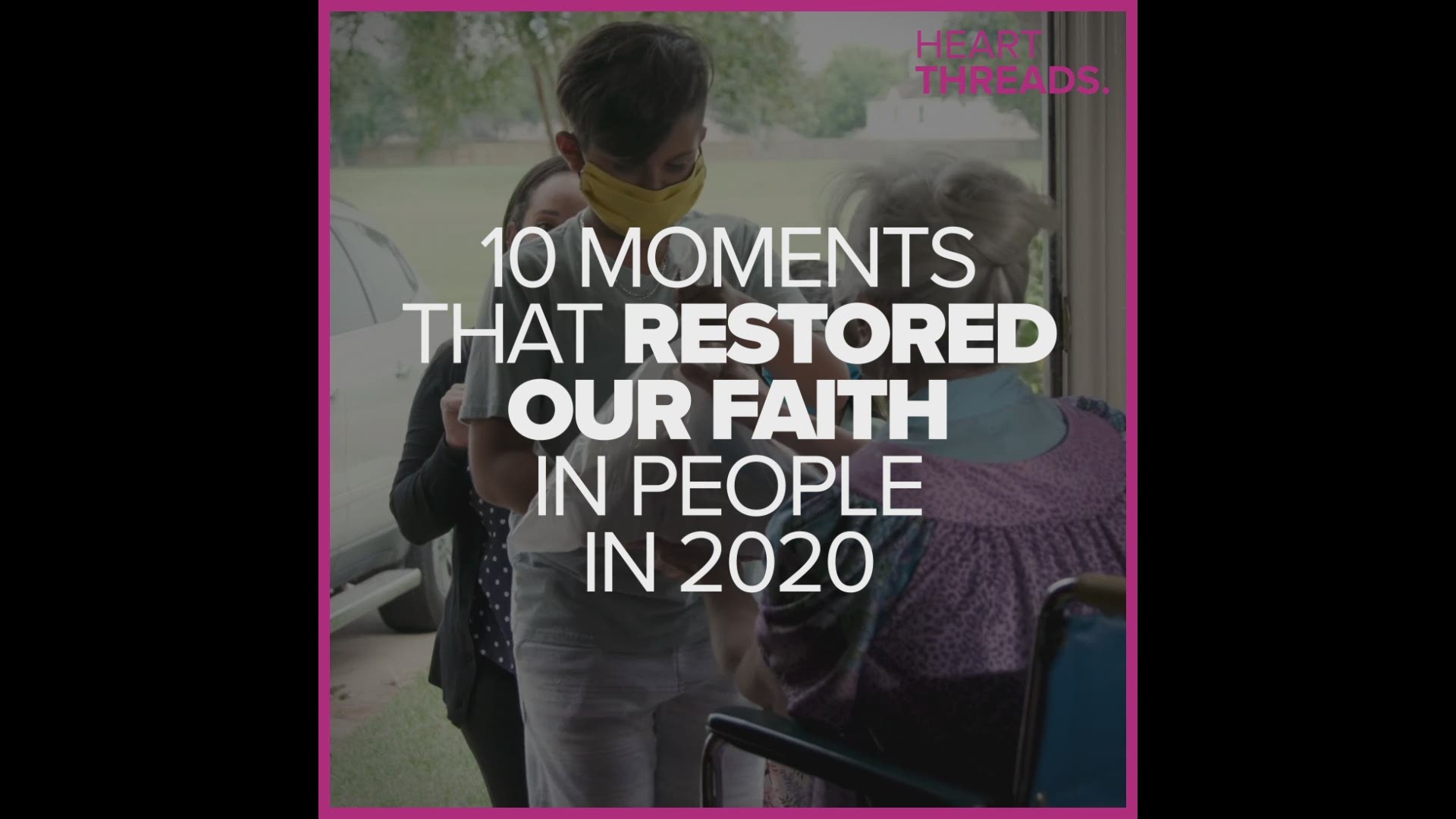 WASHINGTON — During a year jam-packed with news about a global pandemic, a heated election, racial injustice and many other events, there were also good people doing kind things that helped restore faith in humanity.

Here are just a few kind things people have done in 2020 that will hopefully bring a little hope to the end, of what feels like, one of the longest years ever.

1. Child praying for his grandpa with COVID-19

When the coronavirus made Owen’s grandfather sick, he decided to pray every day. His mom captured a photo of the little guy praying that his Opa would make a full recovery.

Three months later, Owen’s prayers were answered and his Opa was out of the hospital and back home.

A Texas DPS Trooper waiting to get an oil change overheard that 92-year-old Mary Summer could only afford to replace one of her car tires, not all of them. So, Trooper Drew Stoner anonymously paid the full $600 for her repairs.

3. US firefighters arriving in Australia to fight wildfires get unexpected welcome

At the beginning of 2020, Australia was still dealing with massive wildfires. When American firefighters arrived in Sydney to help, the airport erupted in applause for these heroes.

4. Officer takes girl to daddy-daughter dance after her father dies

In February, Van Buren school resource officer Nick Harvey and a second-grader named Avey Cox danced the night away at the school dance. Avey says she's always dreamed of going to the daddy-daughter dance, but after her dad passed away, she didn't think she'd ever be able to attend.

High school sweethearts Bob and Annette Harvey reconnected after 63 years and got married in 2020. All it took was two separate marriages, six children, 14 grandchildren, two great-grandchildren, and a special greeting card to finally reunite them.

A teacher virtually reached out to Black students amid the protests and unrest that erupted across the country after the death of George Floyd while in police custody. The message made clear that Black students are beautiful, powerful and have the potential to change the world.

Tom Foster lost his wife of 61 years more than a decade ago, but the 95-year-old WWII veteran found a sense of family through tutoring children to read.

RELATED: At 95 years young, Tom Foster still goes to school once a week

When Christian was 8 years old, he suffered burns on about 95% of his body after an accident with a bonfire. About two years after the accident, he was put into foster care after his biological mother could no longer care for him. With his future in limbo, his speech therapist Erica and her fiancé Matt decided to adopt him.

9. Wife takes a job as a dishwasher to see husband in nursing home

Mary Daniel was separated from her husband, Steve, for 114 days amid the coronavirus pandemic. He has early-onset Alzheimer's and was staying in a memory care unit at a nursing home where no visitors were allowed. So, Mary accepted a job working at the nursing home as a dishwasher so she could see her husband.

RELATED: Wife takes job as dishwasher so she can see her husband with Alzheimer's

A woman woke up from surgery to discover braids in her hair that weren’t there before she went under — it turned out her doctor, a girl dad, did it for her. India Marshall said she had bone growths on her skull that recently required surgery. Before her surgery, she washed and detangled her hair and didn’t give it another thought. When she awoke, unbandaged her head and looked in the mirror, she discovered someone else had braided her hair to keep it from tangling.

While she first assumed it was one of the nurses, she later found out it was her surgeon who performed the simple act where kindness and representation intertwined.

RELATED: Charlotte woman says doctor took time to braid her hair before surgery: "To have that experience, it is priceless."