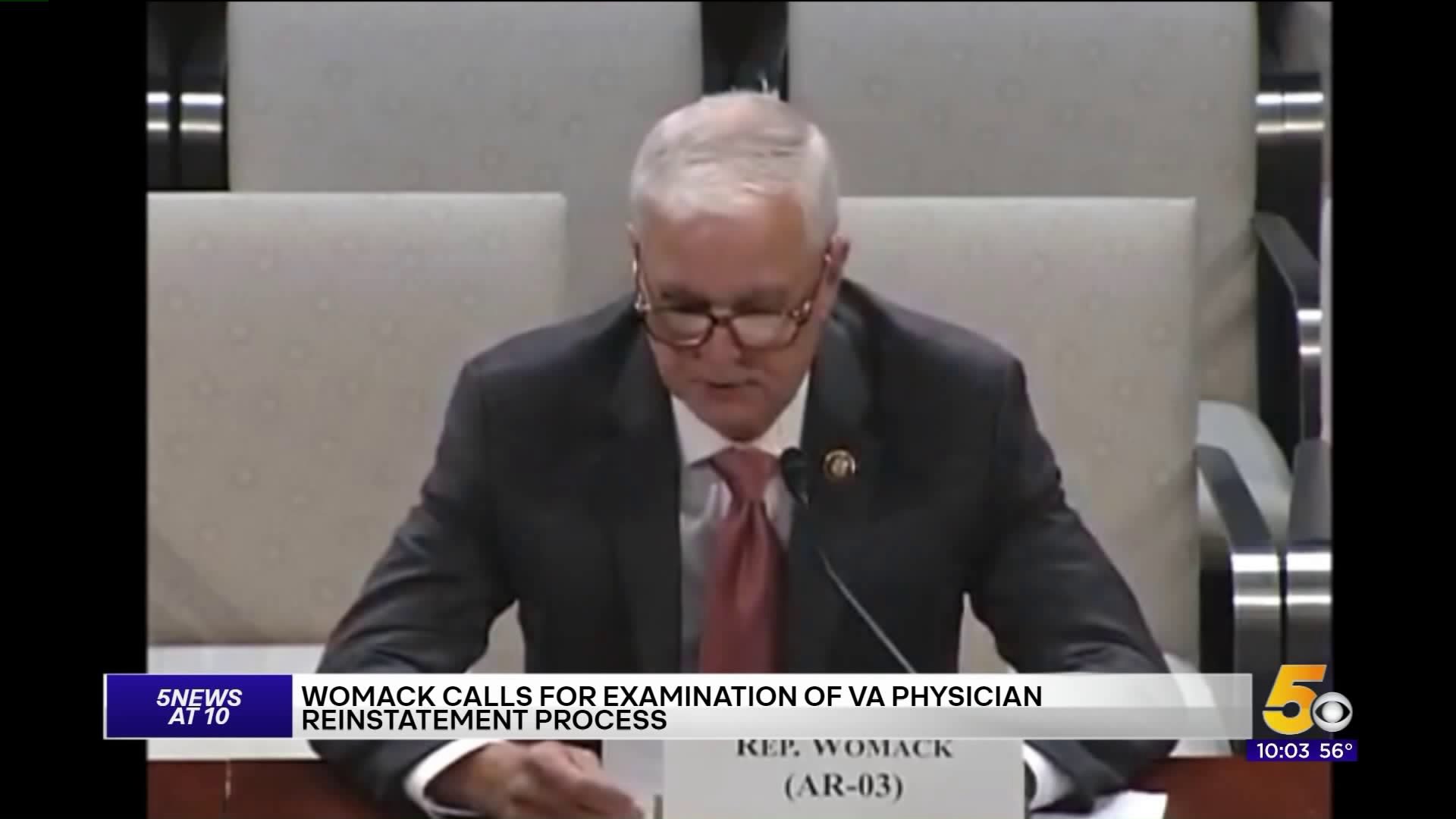 The hearing was scheduled following Womack’s statement in front of the committee last month, which highlighted the misconduct of former Fayetteville VA pathologist Robert Levy and called for a review of the actions taken by the VA to address the situation.

This issue directly coincides with the situation involving Levy who was previously found to be intoxicated on the job and was later returned to his supervisory position without proper oversight.

According to a press release from Womack, this decision allowed Levy to falsify reviews of his work and ultimately conceal his misconduct, which harmed the health and well-being of Third District veterans.

Womack’s submitted testimony said, in part, “As I previously stated, I do not understand why, at the very least, an independent review procedure was not put in place to ensure Mr. Levy’s subordinates were able to submit their reviews without interference. I think this committee and the VA should look at the procedures for reinstating a physician following a substance abuse issue. Furthermore, I hope you will look at whether or not those physicians should be returned to supervisory positions.”

The committee will use the feedback to explore solutions to prevent future incidents and help ensure that veterans across the country continue to receive high quality and safe care.

In addition to Womack’s testimony, witnesses from the U.S. Department of Veterans Affairs, Government Accountability Office, and other Congressional members also submitted testimony on medical facilities and their responsibilities in the areas of credentialing, privileging, and quality management.

Womack’s full testimony for the record is below.

SUBMITTED TESTIMONY TO THE HOUSE COMMITTEE ON VETERANS’ AFFAIRS

As many of you know, Robert Levy, a former employee of the Veterans Health System of the Ozarks (VHSO), was recently indicted in the Western District of Arkansas on three counts of involuntary manslaughter and 28 counts of mail fraud, wire fraud, and making false statements to law enforcement.

These charges stem from Mr. Levy’s conduct while serving as Chief of Pathology and Laboratory Medical Services for the VHSO, which is located in my district in Fayetteville, Arkansas.

While he was serving as Chief of Pathology, Mr. Levy was responsible for diagnosing veterans after examining their fluid and tissue samples.  He repeatedly showed up to work intoxicated, first from alcohol and then, in order to pass mandated alcohol tests, from a substance called 2M-2B.  This compound produces a sensation like alcohol but cannot be detected on normal alcohol screenings. Mr. Levy was finally fired from the VA in April 2018 following 2M-2B being detected in a fluid sample.

This was not Mr. Levy’s first time failing an alcohol test. He was required to pass mandatory alcohol screenings because in 2016 he was found to be intoxicated while on duty. His blood alcohol content was 0.396 —almost 5 times the legal limit— during the time he was scheduled to consult on a biopsy for a patient.

I was given the opportunity to speak about this situation at your committee’s Member Day Hearing last month. During my testimony, I asked your committee to investigate the circumstances surrounding Mr. Levy’s reinstatement, specifically how he was allowed to return to duty as a supervisor. I want to thank each and every one of you for responding to my request by holding this hearing.

While I understand this hearing is intended to look broadly at the VA’s credentialing system, I would ask you to pay special attention to the physician reinstatement process. Particularly, the process for determining whether a physician should be returned to a supervisory position.

As Mr. Levy’s indictment clearly shows, he was able to conceal misdiagnoses that may have occurred because of his intoxication due to his supervisory position. This position allowed him to ensure any conflicting diagnoses were removed or deleted and, in some cases, he was able to falsely claim a second physician conducted a review when no review was completed.

As I previously stated, I do not understand why, at the very least, an independent review procedure was not put in place to ensure Mr. Levy’s subordinates were able to submit their reviews without interference. I think this committee and the VA should look at the procedures for reinstating a physician following a substance abuse issue. Furthermore, I hope you will look at whether or not those physicians should be returned to supervisory positions.

I truly appreciate your attention to these matters. The people of Northwest Arkansas and across the country are well-served by your diligence and knowledge. I look forward to any solutions that come from this hearing and stand ready to help you in any way.

Our veterans stepped forward to defend our country and our values. They answered the call of duty, and it is now up to us to support these patriots. This hearing is the first step to ensuring the VA’s credentialing system is appropriate for that mission.

Thank you again for your time and attention."