WASHINGTON (AP) — President Donald Trump triggered outrage Tuesday by comparing the Democrat-led impeachment inquiry to a lynching, assigning the horrors of a d... 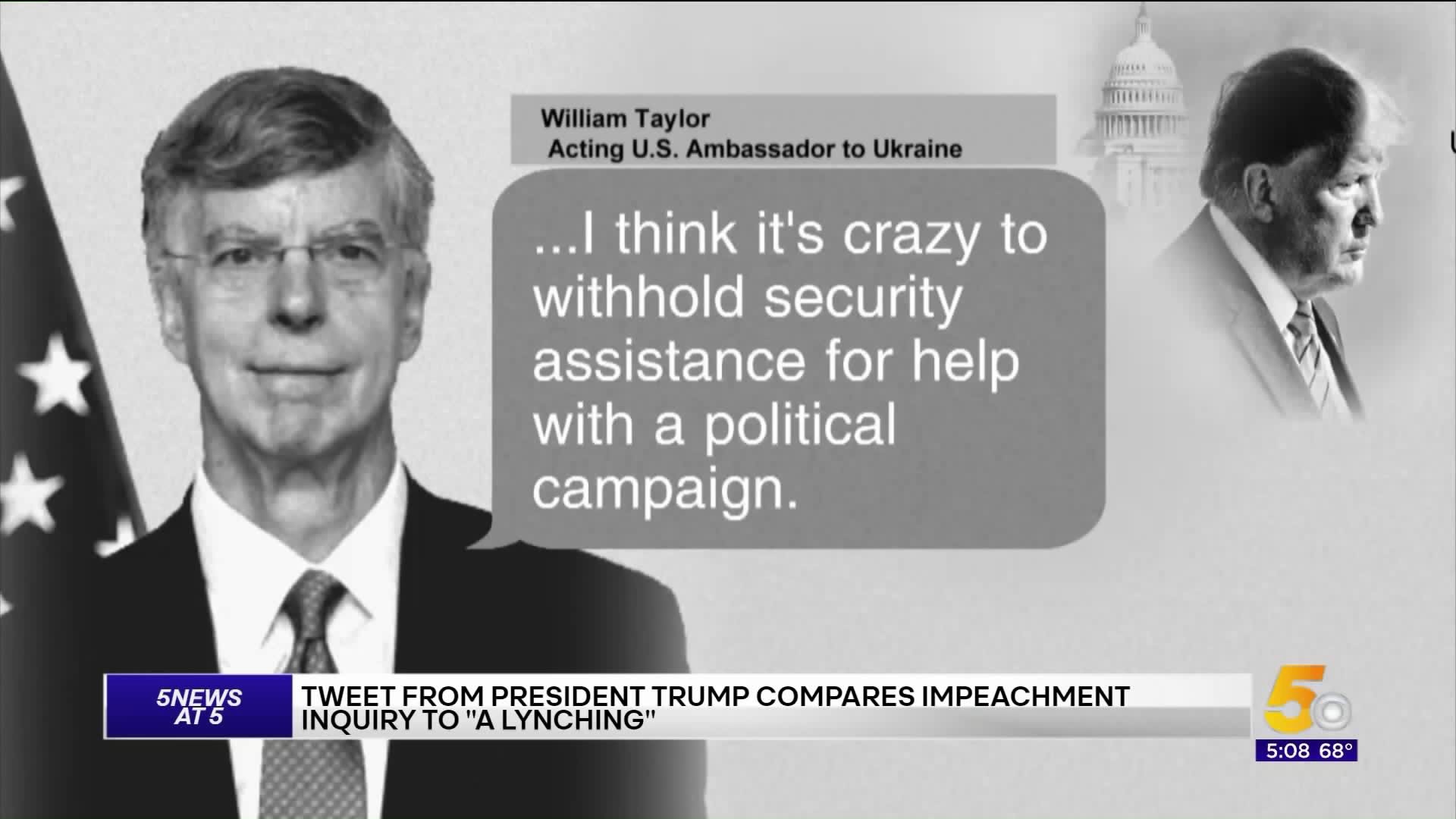 WASHINGTON (AP) — President Donald Trump triggered outrage Tuesday by comparing the Democrat-led impeachment inquiry to a lynching, assigning the horrors of a deadly and racist chapter in U.S. history to a process laid out in the Constitution.

"That is one word no president ought to apply to himself," said Democratic Rep. James Clyburn of South Carolina, the highest-ranking African American in Congress. "That is a word that we ought to be very, very careful about using."

Rep. Bobby Rush, D-Ill., who is also black, called on Trump to delete the tweet.

Sen. Doug Jones, D-Ala., tweeted to Trump: "No sir! No, @realDonaldTrump: this is NOT a lynching, and shame on you for invoking such a horrific act that was used as a weapon to terrorize and murder African Americans."

Republican legislators largely tried to put the focus on what they said was the unfair way in which Democrats are conducting the inquiry.

Sen. Lindsey Graham, R-S.C., said Trump's description was "pretty well accurate." He called the impeachment effort a "sham" and a "joke" because the president does not know the identity of his accuser, and the process is playing out in private.

"This is a lynching in every sense," said Graham, who is close to Trump.

Sen. Tim Scott of South Carolina, the Senate's only black Republican, agreed with Trump's sentiment but not his word choice.

"There's no question that the impeachment process is the closest thing (to) a political death row trial, so I get his absolute rejection of the process," Scott said. He added, "I wouldn't use the word lynching."

House Minority Leader Kevin McCarthy, R-Calif., who is also close to Trump, also said "lynching" isn't "the language that I would use."

Defending Trump, White House spokesman Hogan Gidley said the president was trying to point out the way he has been "attacked" by the news media since before he took office. Trump's tweet mentions Republicans and Democrats only, not the news media.

"The president's not comparing what's happened to him with one of our darkest moments in American history," Gidley said.

Lynchings, typically hangings, were used mostly by whites against black men, mostly in the South, beginning in the late 19th century amid rising racial tensions. By comparing his possible impeachment to a lynching, Trump also likened Democrats to a mob intent on lynching someone.

Under pressure over impeachment, blowback over his Syria policy and other issues, the Republican president tweeted Tuesday: "So some day, if a Democrat becomes President and the Republicans win the House, even by a tiny margin, they can impeach the President, without due process or fairness or any legal rights."

"All Republicans must remember what they are witnessing here — a lynching. But we will WIN!"

Malinda Edwards, whose father was lynched by Ku Klux Klansmen in Alabama in 1957, said Trump's tweet was "unbelievable."

"Either he's very ignorant or very insensitive or very racist and just doesn't care, said Edwards, 66, of Dayton, Ohio. Her father, Willie Edwards Jr., was forced to jump of a river bridge by Klansmen who heard that he had smiled at a white woman. Edwards' name is now among those on a memorial in Montgomery honoring more than 4,000 lynching victims. His daughter said Trump's comment made light of the horror experienced by victims of racially motivated killings.

"These are people who went through the most gruesome and heinous things that could be done to them," Edwards said.

The Congressional Black Caucus encouraged Trump to visit the National Memorial for Peace and Justice in Montgomery, also known as the "Lynching Museum," to learn more about the history of lynching.

Trump often tries to portray himself as the victim, and the tweet came a day after he lashed out at critics of his decision — since rescinded — to schedule a major international economic summit for 2020 at one of his Florida golf properties. He also lamented people who invoke the "phony emoluments clause."

A whistleblower's complaint that Trump was attempting to use his office for personal political gain during a July 25 phone conversation with Ukraine's president led House Speaker Nancy Pelosi to open the impeachment inquiry.

Trump insists he did nothing wrong. He has characterized the conversation with Ukrainian President Volodymyr Zelenskiy as "perfect" and argues that sore-loser Democrats are still trying to overturn the 2016 election that put him in the White House and keep him from winning reelection next year.

Lynchings were fueled by anger toward blacks across the South, where many whites blamed their financial problems on newly freed slaves living around them, the NAACP notes.

Separately Tuesday, a U.S. appeals court in Atlanta was to consider whether federal judges can order grand jury records unsealed in the mob lynching of two black couples . The young black sharecroppers were stopped along a rural road in 1946 by a white mob that dragged them out and shot them multiple times east of Atlanta. More than 100 people reportedly testified before a grand jury, but no one was ever indicted in the deaths of Roger and Dorothy Malcom and George and Mae Murray Dorsey.