Barnett, a rioter photographed in Nancy Pelosi's office, was granted bond by a federal judge in Fayetteville, Ark. on Friday. That bond has since been revoked. 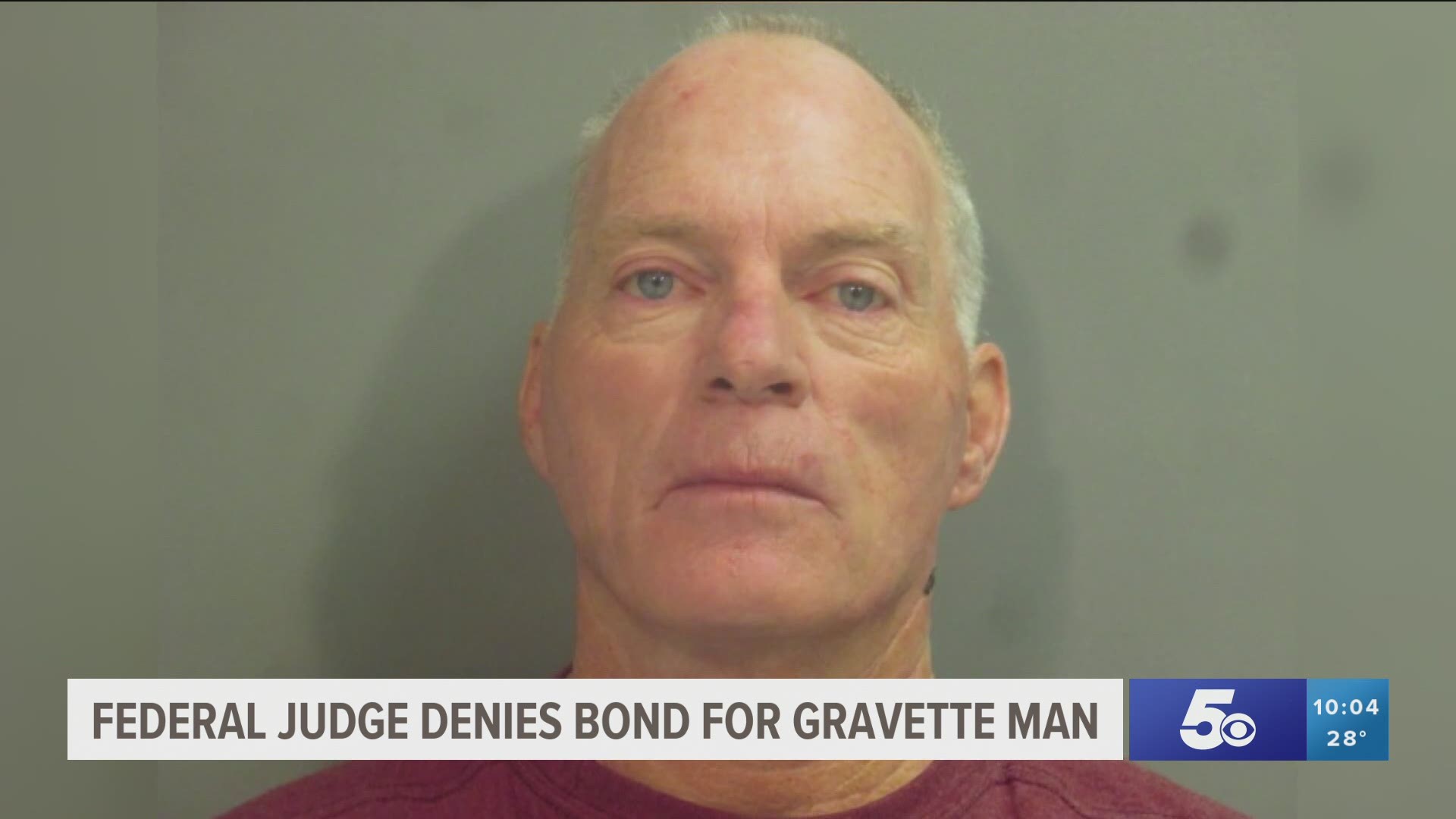 FAYETTEVILLE, Ark. — Richard Barnett, the Northwest Arkansas man who joined a mob of pro-Trump supporters in storming Capitol Hill that resulted in five deaths, appeared in federal court in Fayetteville, Ark. on Friday (Jan. 15) for a bond hearing.

He is facing a slew of charges for his participation in the riot, including:

Barnett made worldwide headlines after he was spotted in House Speaker Nancy Pelosi's office during the riot, where he also stole a letter from a desk. 5NEWS-KFSM was one of the only media outlets in the nation to speak with Barnett following the riot.

The mob that stormed the Capitol was fueled by months of false claims by President Trump and his allies that the election was stolen from the president. There is no credible evidence that election fraud took place that would change the outcome of the 2020 election.

He made his initial appearance in federal court Tuesday (Jan. 12). It was then revealed that Barnett entered the Capitol with a stun gun, adding 10 years to his possible sentencing for unlawful entry on Capitol grounds.

On Friday, Special Agent Jonathan Willet with the FBI was called as a witness to answer questions about the investigation into Barnett.

Willet said Barnett admitted to FBI agents the day he turned himself in that he was in House Speaker Pelosi's office. Barnett told FBI agents that all firearms from his home were removed before it was searched.

Besides packaging for the stun gun, no firearms or other weapons were recovered from Barnett's home in Gravette when special agents searched his home. Barnett is a known advocate of the Second Amendment and has been spotted with firearms while attending Northwest Arkansas events.

Investigators could also not locate a cell phone Barnett recorded his actions at Capitol Hill when they searched his home. Barnett turned off location tracking on his cell phone while driving home to Arkansas from Washington. He also covered his face and only paid with cash on the drive home.

Willet said that Barnett appeared to be controlling of his domestic partner, Tammy Newburn, while special agents interviewed the pair about what happened.

A discrepancy was brought up that the birth date on Barnett's driver's license did not match his actual birthday.

Willet also discussed a time when a woman called Fayetteville Police about a person that matched Barnett's description pointing a firearm at her during a Second Amendment rally in July 2020. Fayetteville officers were also called to a "Stop the Steal" rally in Nov. 2020 where Barnett was allegedly causing a disturbance while armed with a firearm.

Tammy Newburn was questioned about Barnett. She did not travel to Washington, D.C. with him. She outlined the days that FBI agents searched her and Barnett's home. She could not answer why Barnett's cell phone that was at the Capitol with him is missing.

Another group of witnesses, including Barnett's stepdaughter, were asked questions and said they were shocked to see Barnett at the nation's Capitol and described him as an honest man.

One of the witnesses identified two other men Barnett met up with at the nation's Capitol.

Federal Judge Erin L. Wiedemann with U.S. District Court Western District of Arkansas initially granted Barnett a $5,000 bond on Friday. But, that ruling was overturned by a federal judge in Washington D.C. just after her ruling.

Chief Judge Beryl A. Howell with U.S. District Court District for the District of Columbia ordered Barnett to be transported to Washington instead of being released on bond. A Motion for Emergency Stay was issued for Barnett as well.

It's unclear at the moment when Barnett will appear in court again.

Another man from Arkansas has been arrested after a shocking video shows him allegedly beating a police officer with a flagpole holding the American flag during the riot.