A Northwest Arkansas man seen in a viral photo in House Speaker Nancy Pelosi's office during a riot at Capitol Hill could face federal charges. 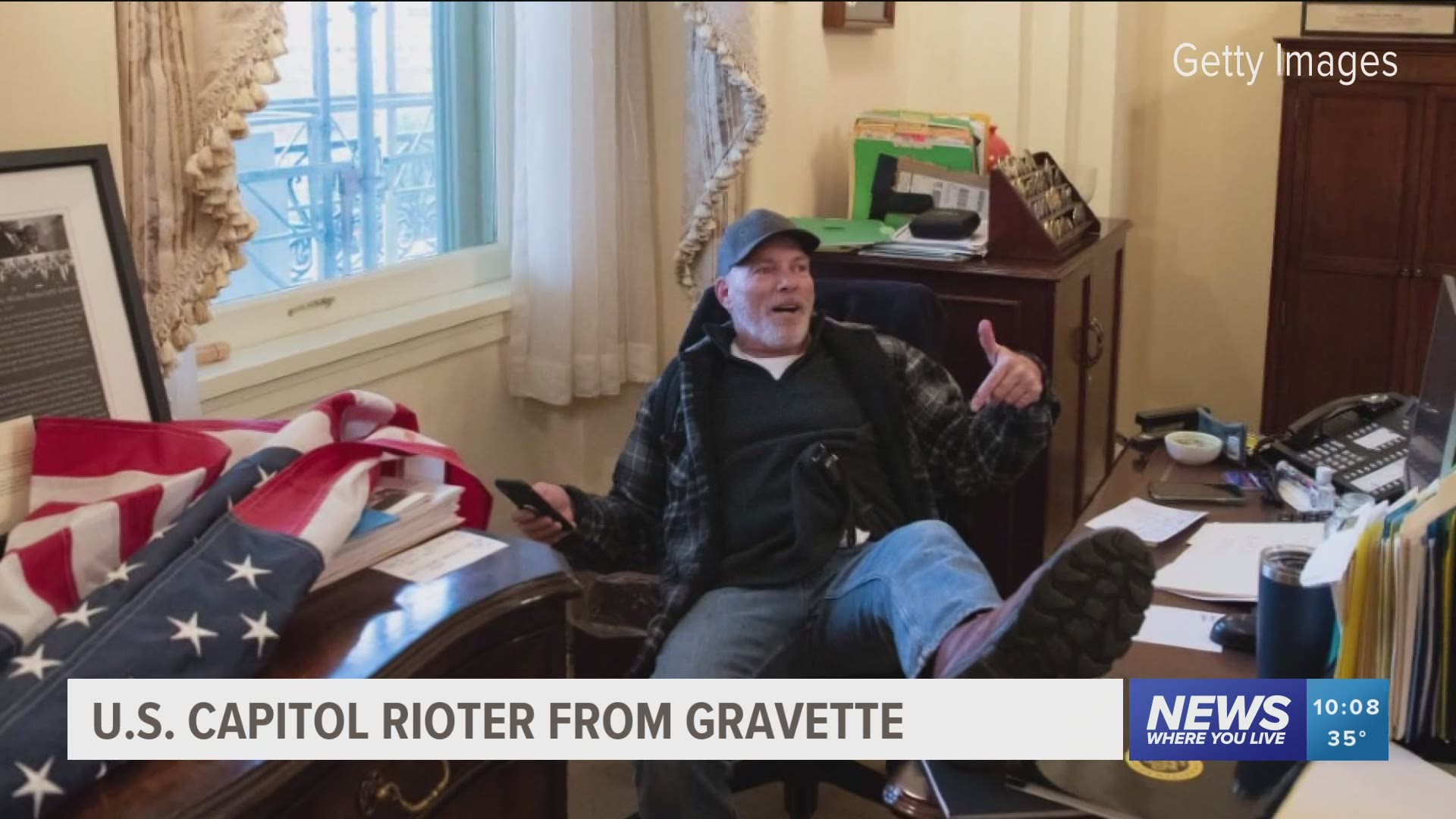 GRAVETTE, Ark. — Update: Richard Barnett has been arrested in Arkansas.

A Northwest Arkansas man seen in a viral photo sitting behind a desk in Nancy Pelosi's office during a riot where President Trump supporters stormed the U.S. Capitol could face federal charges for his actions.

Shortly after President Donald Trump urged his supporters to march down to the U.S. Capitol, rioters breached police barricades, making their way into the building and inside Senate chambers. The insurrection caused a lockdown, and members of Congress, who were in the process of confirming the electoral college votes that would officially make Joe Biden the president-elect, were escorted from chambers.

Four people died, 50 police officers were injured in the chaos.

Among the most striking images of looters in the Capitol was one of a man with his foot on a desk in Speaker Pelosi's office. That man is Richard Barnett of Gravette, Arkansas.

5NEWS spoke with Barnett on Wednesday, and he confirmed he was the man in the photo sitting at Pelosi’s desk. Despite being part of the throng of extremists who were trespassing, he claims he was just looking for a bathroom inside the Capitol building.

Barnett said he traveled to Washington to hear President Trump speak. "The crowds were unbelievable," he said.

In his interview with 5NEWS, Barnett expressed his anger with the police response to the violent riot at the U.S. Capitol on Wednesday.

"We marched down there. They start tear-gassing us. They start roughing up our people. It pissed some people off," Barnett said. "They went to the front door, and they started demanding to be let inside. I wasn't even up there at that point. I was climbing the steps to see what was going on. When I got to the top, they had breached the doors and were trying to get in."

Barnett claims he was pushed inside the Capitol when a mob broke through the doors and found Pelosi's office sometime later. Regardless of how he entered the building, he admitted to participating in the rioting inside.

He says he carried a flag into her office, left her a note, and was removed by Capitol Police.

"I threw my feet up on the desk at that point. I realized some a**holes had cut me also and I bled on her envelope, so I picked up the envelope and put it in my pocket, and I put a quarter on the desk cause I'm not a thief," Barnett told 5NEWS.

It's unclear why he was not arrested Wednesday for being part of the siege on Capitol Hill. As of Thursday morning, police had made 83 arrests and released images of 26 other "persons of interests" wanted for unlawful entry to the Capitol.

5NEWS reached out to the FBI about Richard Barnett. The FBI could not confirm or deny the existence of an investigation into Barnett. The FBI did say they are aware of the photos of him inside the U.S. Capitol. Members of the Northwest Arkansas community are asked to look at the photos of Barnett and try to identify anyone else that may have been with him and contact the FBI.

When asked about the possibility of facing federal charges for illegally entering the Speaker's office, Barnett said, "Am I scared? Hell no. But yeah, there's a possibility. I didn't do anything. I didn't breach the doors. I got shoved in. I didn't mean to be there. Hell. I was walking around looking for a bathroom."

A woman, later identified as 35-year-old Ashli Babbit,  was killed after being shot by police inside the U.S. Capitol building during the chaos caused by the rioters.

Barnett was not near the shooting but said he believes the woman died a hero.

"She died a hero, a patriot and I feel for her family," he said. "That shouldn't have happened."

Arkansas representatives in D.C. have come together to unanimously take a stance against the violent actions taken by President Trump supporters on Wednesday.

Womack tweeted, "I'm sickened to learn that the below actions were perpetrated by a constituent. It's an embarrassment to the people of the Third District and does not reflect our values. He must be held accountable and face the fullest extent of the law. This isn't the American or Arkansas way."

I'm sickened to learn that the below actions were perpetrated by a constituent. It's an embarrassment to the people of the Third District and does not reflect our values. He must be held accountable and face the fullest extent of the law. This isn't the American or Arkansas way. https://t.co/kSsA6LxdM8

Voting history for Barnett shows he is not registered to a political party in Arkansas.

He is known to be active in groups around Northwest Arkansas that support the Second Amendment.

In July 2020, 5NEWS spoke with Barnett at a rally against face masks in Bentonville.

5NEWS is working to uncover more about Barnett and his participation in the Capitol riot.

We hear you. KFSM readers have sent us feedback about this story providing exposure to a local man who rioted at the U.S. Capitol.  Our intent was to inform the KFSM audience that the man in the photo sitting in the Speaker of the House’s office – which has been shared around the world – is from our community.  We failed to delve into his background and challenge his claims.  Thank you for holding us accountable, and we have updated this story with additional context and reporting.