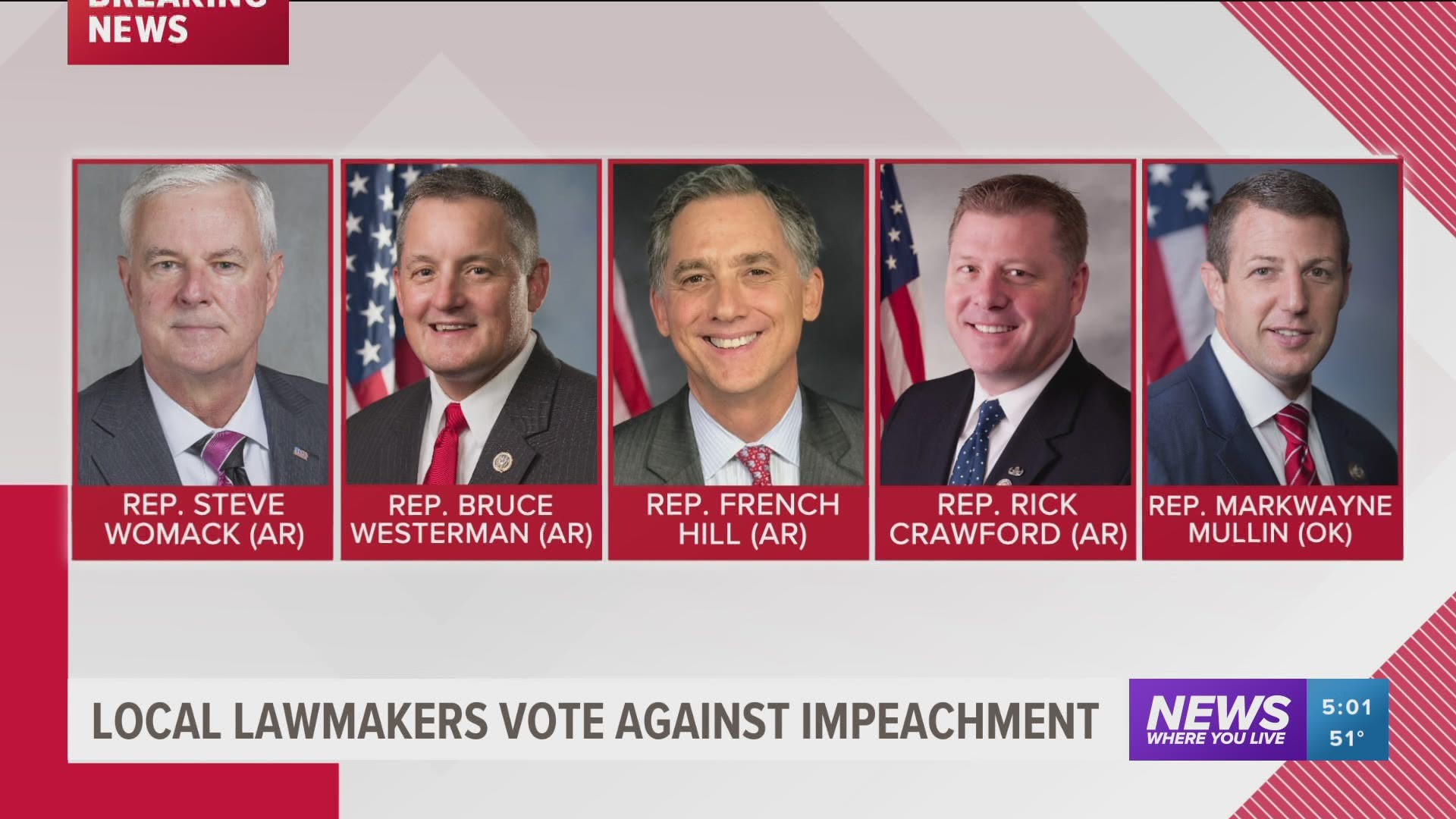 WASHINGTON, D.C., USA — The four Arkansas U.S. Representatives in Congress have voted against impeaching President Trump for a second time.

The vote comes after a mob of pro-Trump supporters stormed the U.S. Capitol last week following months of false claims that the election was stolen from the president.

“There is no defending the actions of rioters and the leaders who fanned the flames of insurrection. It was a national disgrace. But no option currently presented before the House will remove the President before his term ends on January 20th. The impeachment vote can therefore only serve to inflame tensions and test an already fragile nation. My position isn’t to appease any party, ideology, or person – it is to start the process of putting our country back together. Congress should be using this moment to solve for the pressing issues of America – defeating the coronavirus, enhancing vaccine distribution, ensuring an orderly transition of government, fighting socialist policies, reinvigorating our economy, and healing the deep divisions we face. Let us not be distracted.”

Rep. Rick Crawford took to Twitter to share why he voted against impeaching President Trump following the violent actions at the Capitol.

I do not support this impeachment because rushing and short-circuiting the process of a serious criminal investigation by the House of Representatives would be a risky precedent that could lead to widespread abuse by both parties. (1/3)

Rep. French Hill released a video on Facebook explaining why he voted against the second impeachment of President Donald Trump and called for unity between Republicans and Democrats.

Rep. Bruce Westerman called the impeachment Wednesday rushed and said that a dangerous precedent was being set by going forward with the vote in a statement released to the press.

“I voted against impeaching President Donald J. Trump in the U.S. House of Representatives. Today's rushed process is not in keeping with one of the House's most solemn responsibilities. Unlike previous impeachment votes, there were no hearings and very little debate of the serious charges brought against the president. I carefully considered my colleagues' arguments and determined that our constitutional duty to carefully consider the power of impeachment must not be circumvented for the sake of expediency. This rushed impeachment sets a dangerous precedent for future Congresses. In addition, Joseph Biden will become president in seven days. This vote does nothing to remove President Trump before that time.

“One week ago, I experienced the attack on the Capitol firsthand. I make no excuses for the president or any others involved, and I pray that our country never again experiences an event like this. All those involved must be held accountable for their actions, and they must receive justice according to the constitutional rights they have as citizens of this country.

“Political rhetoric and the events of the past week have highlighted divisions in Congress and across the United States. It has divided our friends and our families. Even in my immediate family, there are differences of opinion on impeachment. It’s in our states, communities and churches. My prayer is that we end the divisions and move forward together seeking a more perfect union.”

President Trump was first impeached by the House in 2019 over his dealings with Ukraine, but the Senate voted in 2020 to acquit. He is the first president to be impeached twice.