President Trump said if the RNC can't be held at full capacity, he'll be forced to find another site. Mayor Lenny Curry said Jacksonville, Fla. is ready and able. 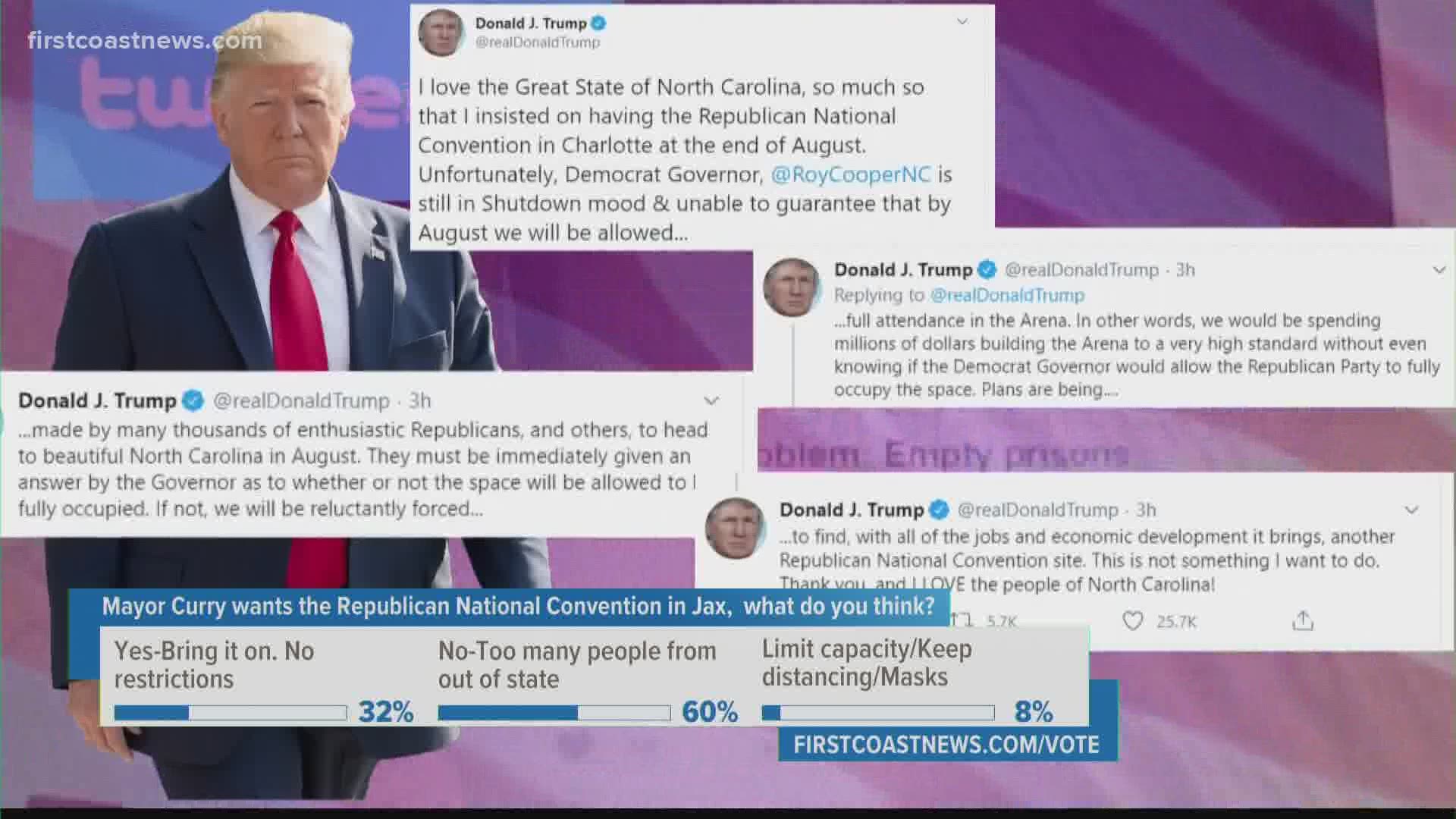 JACKSONVILLE, Fla. — President Donald Trump expressed frustration Monday with North Carolina Gov. Roy Cooper and his coronavirus restrictions, tweeting he will move the Republican National Convention out of North Carolina if he has to.

On Tuesday, Jacksonville Mayor Lenny Curry extended an invitation to the RCN - "We would be honored to host the Republican National Convention ... " Curry said in a tweet of his own touting Jacksonville's readiness based on the UFC event held at VyStar Veterans Memorial Arena on May 17.

In a long Twitter thread Monday morning, Trump said he loved North Carolina and insisted on having the RNC in Charlotte at the end of August.

"Unfortunately, Democrat Governor, Roy Cooper, is still in Shutdown mood & unable to guarantee that by August we will be allowed full attendance in the Arena." Trump tweeted. "In other words, we would be spending millions of dollars building the Arena to a very high standard without even knowing if the Democrat Governor would allow the Republican Party to fully occupy the space."

President Trump said he needs an answer on whether the RNC can be held in North Carolina with full occupancy. If not, the president said he will be forced to find another RNC site.

"They must be immediately given an answer by the Governor as to whether or not the space will be allowed to be fully occupied. If not, we will be reluctantly forced to find, with all of the jobs and economic development it brings, another Republican National Convention site," Trump tweeted. 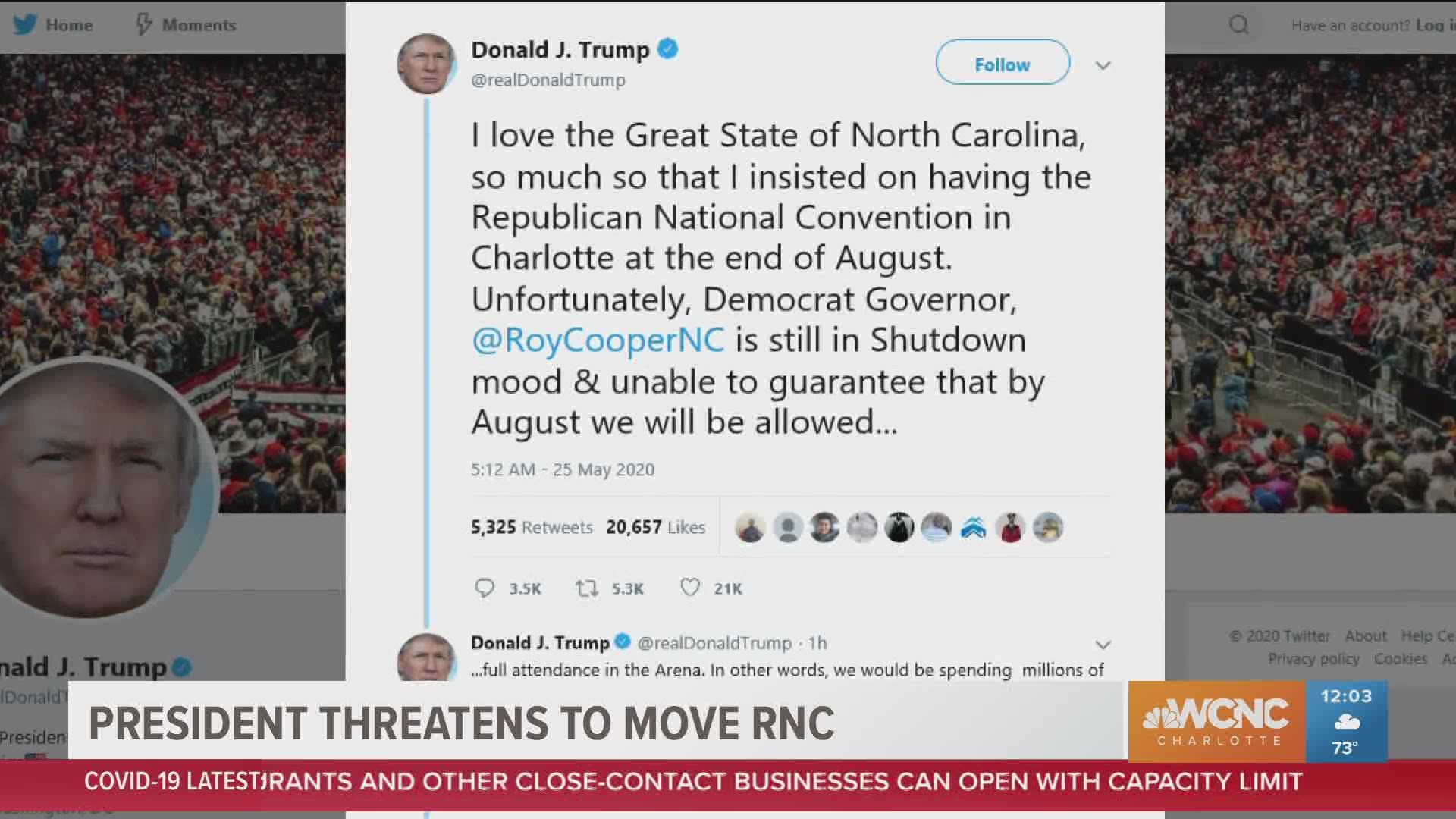 Charlotte Mayor Vi Lyles tweeted in response to Trump's remarks saying the health and safety of Charlotte residents is her top priority.

"The city of Charlotte will continue to follow guidance from Governor Cooper and public health professionals in determining the best and safest way to host the Republican National Convention. While I've remained consistent in my statements regarding the RNC being held in Charlotte, the science and data will ultimately determine what we will collectively do for our city."

“The RNC wants to hold a full in-person convention in Charlotte, but we need the governor to provide assurances that it can occur. We will need some answers sooner rather than later, or we will be forced to consider other options.”

Gov. Cooper released the following statement regarding President Trump's remarks on the RNC:

"State health officials are working with the RNC and will review its plans as they make decisions about how to hold the convention in Charlotte. North Carolina is relying on data and science to protect our state's public health and safety."

The City of Charlotte has released the following statement regarding the president's remarks on the RNC:

We are in constant communication with our local and federal counterparts to plan and prepare for a safe Republican National Convention (RNC).

The City of Charlotte, Mecklenburg County and other local stakeholders will continue to plan for the RNC while respecting national and state guidance regarding the pandemic.

We are working with stakeholders to develop guidelines for several large events planned for Charlotte in the coming months including the RNC and anticipate providing that guidance in June.

"There’s a reason why cities vie for this two years in advance because of all the logistics works that it takes to pull off an event like this," Dr. Michael Bitzer at Catawba College said about the RNC. "And so, I would be surprised if another city says ‘yes, we can do this in less than 3 months' time, come to us, President Trump."

Bitzer went on to say that if the president decides to move the convention, it's his right to do so.

"I just don’t know that we have the data at this point to say in less than 3 months time, 'let’s host 50,000 people when this pandemic could be continuing into this time period,'" Bitzer said

Bitzer continued by saying, "We have seen threats by the president posed in the past nothing has come of it, maybe it’s a way to let him get it out of his system."

Organizers for the Republican National Convention say the event is "full steam ahead" despite the global COVID-19 pandemic.

During a virtual press conference, WCNC Charlotte asked how they plan to keep the more than 50,000 expected visitors safe during the event, which is scheduled for the week of August 24 — four months from now.

Officials said it's too soon to make any definitive call on what they'll do. With 50,000 expected visitors coming to Charlotte for the RNC, that's 50,000 people who will need food, hotel rooms and transportation.

Kelly says the delegates may also be asked to wear masks inside the Spectrum Center during the event.

The convention is expected to bring 50,000 visitors to the Queen City, and Kelly says she believes the event will be, “an economic catalyst for the Charlotte community.”