House Bill 1570 would have made it a felony for healthcare professionals to perform certain gender transition procedures on people under 18. 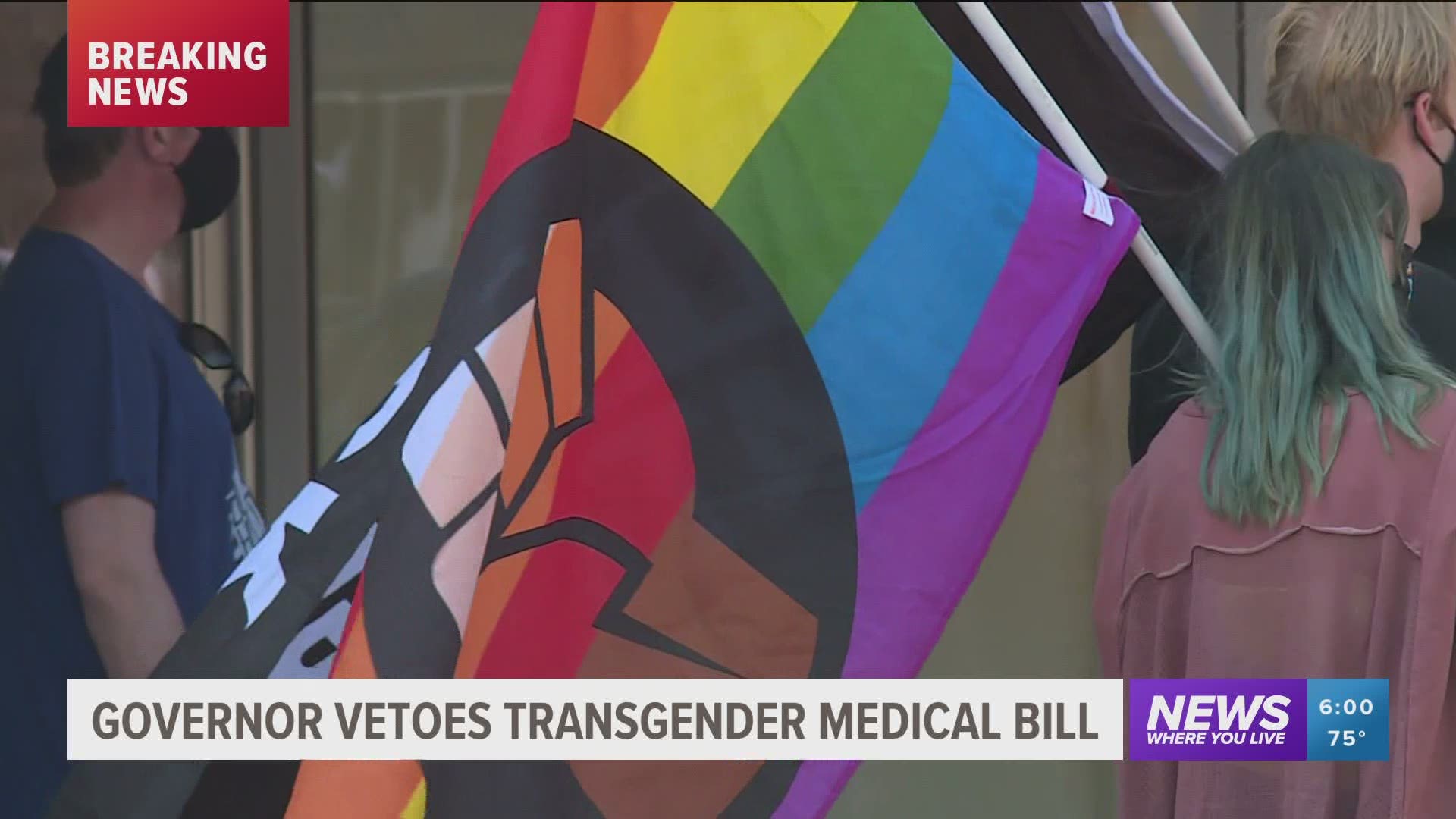 LITTLE ROCK, Ark. — Arkansas’ governor has vetoed legislation that would have made his state the first to ban gender confirming treatments for transgender youth.

Republican Gov. Asa Hutchinson on Monday (April 5) rejected the measure that prohibits doctors from providing gender-confirming hormone treatment or surgery to minors, or from referring them to other providers for the treatment.

The move followed pleas from pediatricians, social workers and the parents of trans youth.

The bill was among several targeting transgender people that have easily advanced in Arkansas.

Hutchinson’s veto can be overridden by a simple majority of the Legislature.

The Arkansas Senate originally voted 28-7 in favor of the measure, which opponents say would be the first prohibition of its kind in the country.

Gov. Hutchinson said while this bill was well intended, it is off course. He says if the bill were to have become law it would've created standards of legislative interference with physicians and parents who are dealing with complex issues.

The governor says he spoke with medical experts and families dealing with the issue before coming to this decision.

“They deserve the guiding hand of their parents and the healthcare professionals that their family has chosen," Gov. Hutchinson said. "House Bill 1570 would put the state as the definitive oracle of medical care overriding parents, patients and healthcare experts.”

President of the Family Council of Arkansas, Jerry Cox, who was in favor of this bill becoming law, released a statement saying in part, “The Arkansas Legislature needs to step up and override the governor’s veto to make sure this good bill becomes law. Gender-reassignment surgeries can leave children sterilized and scarred for life.”

The Family Council of Arkansas, which is in support of the bill, wishes the governor would not have vetoed it.

“The save adolescents from experimentation act, we believe is a good law that is to protect the children of Arkansas from these harmful gender transition procedures,” Charisse Dean with the Family Council said.

Washington County Justice of the Peace Evelyn Stafford has been an empowering voice for the transgender community. Last week, she met privately with Gov. Hutchinson to discuss the impact bill like this is having on the Arkansas LGBTQIA+ community.

Stafford says HB 1570 is the government overreaching and getting in the middle of doctors and families.

“I told the governor that this a very complex issue that most people know very little about and often struggle to understand," she said. “You could tell he was making an honest effort to educate himself about an issue that he knew very little about. This wasn’t something he asked the legislate for. This was something they sent him and then he had just a few days to learn the ins and outs.”

RELATED: The realities of growing up transgender in Arkansas

Watch the governor's full address below:

The ACLU of Arkansas issued the following statement regarding Governor Asa Hutchinson's veto of House Bill 1570:

“This veto belongs to the thousands of Arkansans who spoke out against this discriminatory bill, especially the young people, parents, and pediatricians who never stopped fighting this anti-trans attack,” said Holly Dickson, ACLU of Arkansas executive director. “Medical decisions should be left up to trans youth, their parents, and their doctor – not politicians or the government. Arkansas legislators should recognize the work Governor Hutchinson put into this decision and follow his lead by allowing this veto to stand. We remain committed to stopping this law from harming the people of this state, including going to court if that is what legislators force these families to do to protect their children.”