A poll worker told him since the polling site was city property, face masks are required, which goes against the Governor's directive. 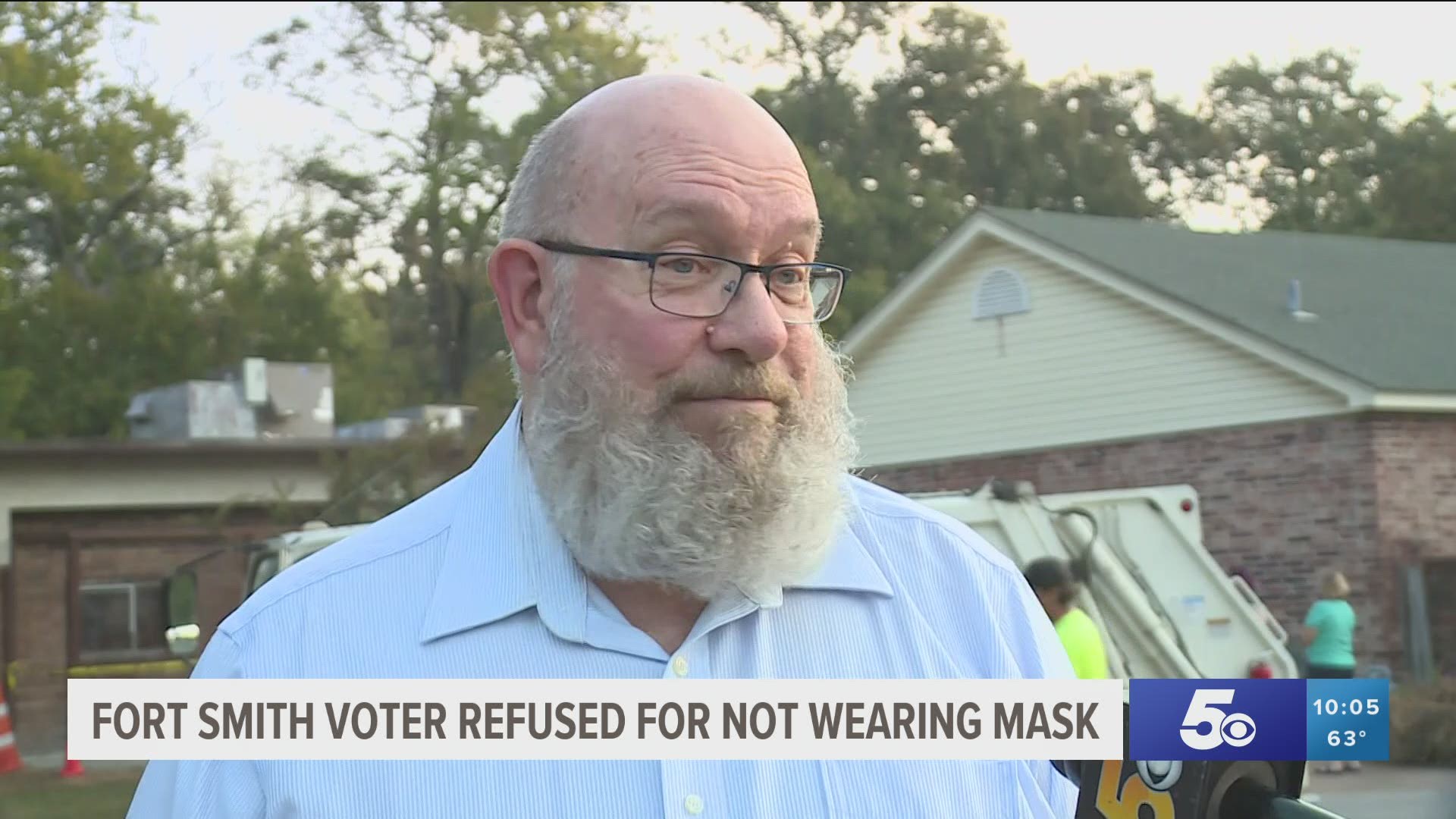 FORT SMITH, Ark. — A Fort Smith man was turned away at the polls because he was not wearing a mask even though face coverings are not required at polling sites in Arkansas.

“I just wanted to come out, cast my vote, and go home and mind my business,” Marc Werschem said.

Marc Werschem was back at the Creekmore Park polling site Wednesday(Oct. 21) for the second time this week after being turned away when trying to early vote on Monday(Oct. 19) for not wearing a mask, which goes against Gov. Asa Hutchinson's mask mandate.

“They came outside and said I couldn’t come in unless I was wearing a mask. I told them the Governor has said that masks are not required in polling places. They gave me an excuse that this is city property, they have an ordinance, and they can’t come in without a mask on,” he said.

Werschem says he also told the poll worker he had a respiratory issue and couldn’t wear a mask, and they told him to try another polling site that isn’t owned by the city. He left and contacted the governor’s office and the Sebastian County Election Commission.

“It upset me a bit because they are not taking into consideration people’s needs. They are just blatantly making a one sizes fits all type of ruling,” he said.

In previous elections, the Sebastian County Election Commission says they have always followed the regulations of the building where the polling site is, and the Creekmore park building is owned by the city where face masks are required to enter. Commissioner Lee Webb says that’s where the miscommunication happened.

“That’s the first day jitters. We train all these people in pretty short notice, a lot of them and sometimes they just forget what they went through their training on. It was corrected pretty quickly as soon as we found out about it,” Webb said.

Werschem says even though he had to go back a second time to cast his ballot, he’s happy the issue is resolved so that other voters like himself won’t be turned away.

“We’ve been giving up our rights slowly one day at a time, and I’m sick and tired of giving up my rights. Eventually, you draw a line in the sand and say this is where I stand, and this is where I’m standing,” he said.

The Sebastian County Election Commission says there are social distancing markers at every polling site that they ask everyone to follow.

Early voting turnout is spiking across the River Valley and Northwest Arkansas. To find an early voting location near you, follow this link provided by the Arkansas Secretary of State.