Ark. Gov. Asa Hutchinson calls for unity over the election and Covid-19 in State of the State Address

He urged Arkansas lawmakers to come together on issues about COVID-19, hate crime legislation and teacher pay. 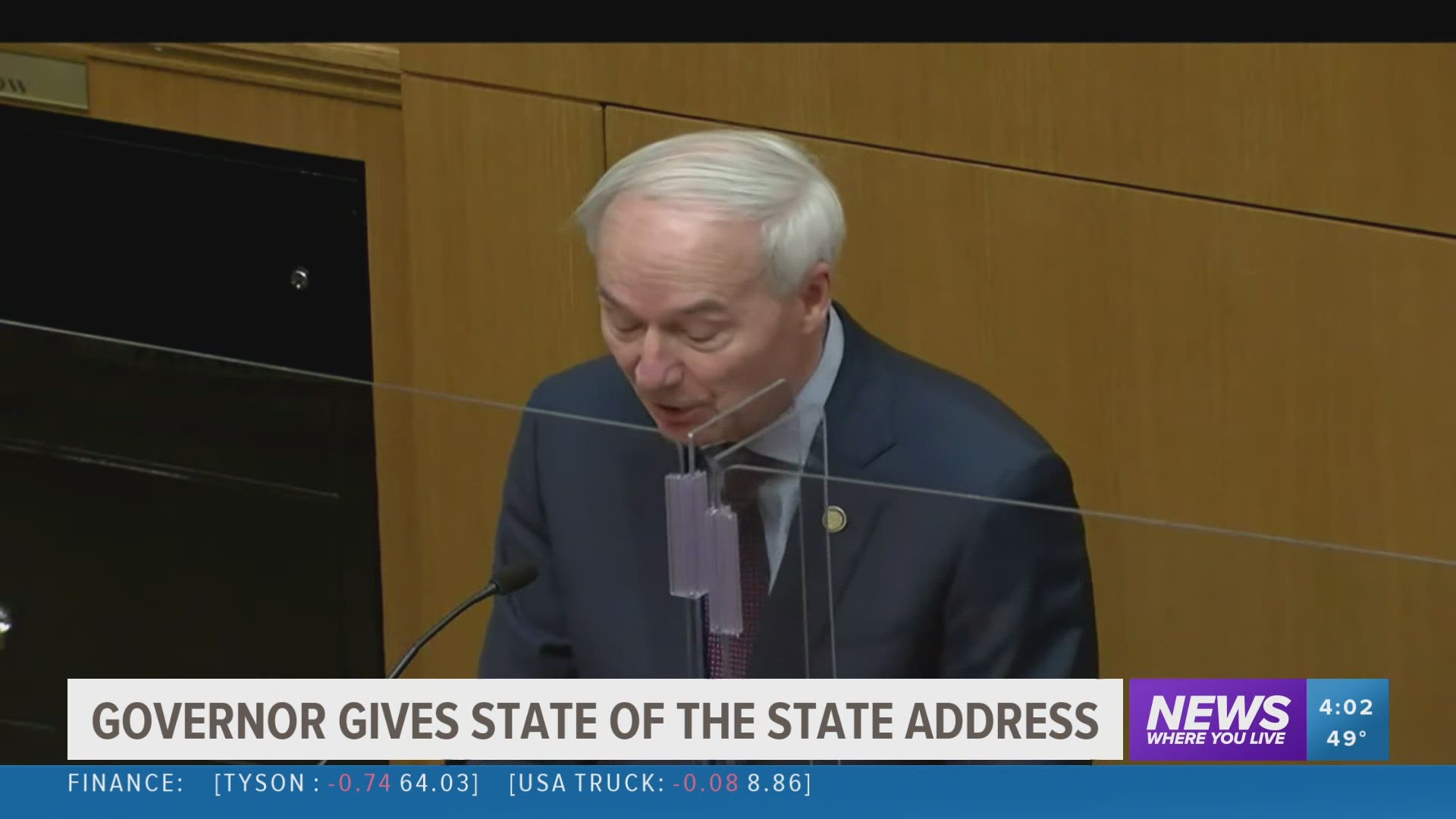 Gov. Asa Hutchinson gave the State of the State Address to the 93rd General Assembly at 10:30 a.m. Tuesday.

He urged Arkansans to come together on issues facing that state, including Covid-19, political turmoil over the 2020 election, a hate crime law in the state, police reform, increasing internet access across the state and teacher pay.

This year's session has a dark cloud looming over lawmakers' heads - the Covid-19 pandemic.

"We're beginning the 11th month of a global pandemic that has impacted every aspect of life," Hutchinson said. "From losing friends and loved ones to increased unemployment needs to changes in education, healthcare, community events, and even in this legislative session. Our life is different today."

In his last time to address the general assembly in regular session, Gov. Hutchinson said that each person who breached the U.S. Capitol during a riot by pro-Trump supporters last week should be prosecuted to the full extent of the law.

"A presidential election often divides the country along political and cultural lines, and I understand the passion," Hutchinson said. "It is okay to be passionate, but we must not let passion cloud our common sense and our commitment to our state and nation."

Hutchinson said the state has to continue to work to benefit the people, highlighting successful campaigns to cut taxes and increase teachers' pay. Hutchinson said his goal is to raise the average teacher salary in the state by $2,000 over the next two years.

He also listed expanding high-speed internet to rural parts of the state as a way to bridge the gap between communities in Arkansas.

When it comes to jobs, Gov. Hutchinson thanked legislators for laws that encourage businesses to open in Arkansas. He highlighted Hytrol Conveyor expanding to Fort Smith, bringing 250 new jobs to the city, as an example.

The House and Senate convened on Monday. Hutchinson hopes lawmakers can work together to tackle that hardest issue in the state, overcoming Covid-19.

"Our first responsibility is to act on the healthcare emergency that faces our state," Hutchinson said.

Arkansas legislators argued over face mask restrictions and looked to remove some of Hutchinson's power to respond to the virus on Monday.

Both chambers featured new safety measures that include plexiglass partitions between members.

“This is one of the most unique legislative sessions we will ever experience,” said Roby Brock with Talk Business & Politics.

The current emergency declaration in Arkansas, which is tied to a face mask mandate, is set to expire in Feb. 2021. Hutchinson hopes lawmakers will act quickly to continue supporting Arkansans during the pandemic.

Hutchinson asked the assembly to pass appropriations to allow federal Covid-19 relief funds, which have been granted by Congress and sent to the states, to be spent on getting vaccines more quickly and into the arms of more Arkansans. Less than 90,000 Arkansans have received the vaccine thus far.

Another high-interest topic is the push for hate crime legislation and the push back. This legislation is something Gov. Asa Hutchinson vocalized his support for.

"My only request is that you listen and make your own judgment on the merits and fairness of the bill," Hutchinson said to lawmakers.

Hutchinson said failure to pass hate crime legislation in Arkansas will negatively impact opportunities for the state in the future.

Arkansas is currently only one of three states without a hate crime law.

You can watch the full State of the State Address below.