Richard Barnett first made headlines when he was spotted with his feet on a desk in Nancy Pelosi's office during the Capitol riot in January. 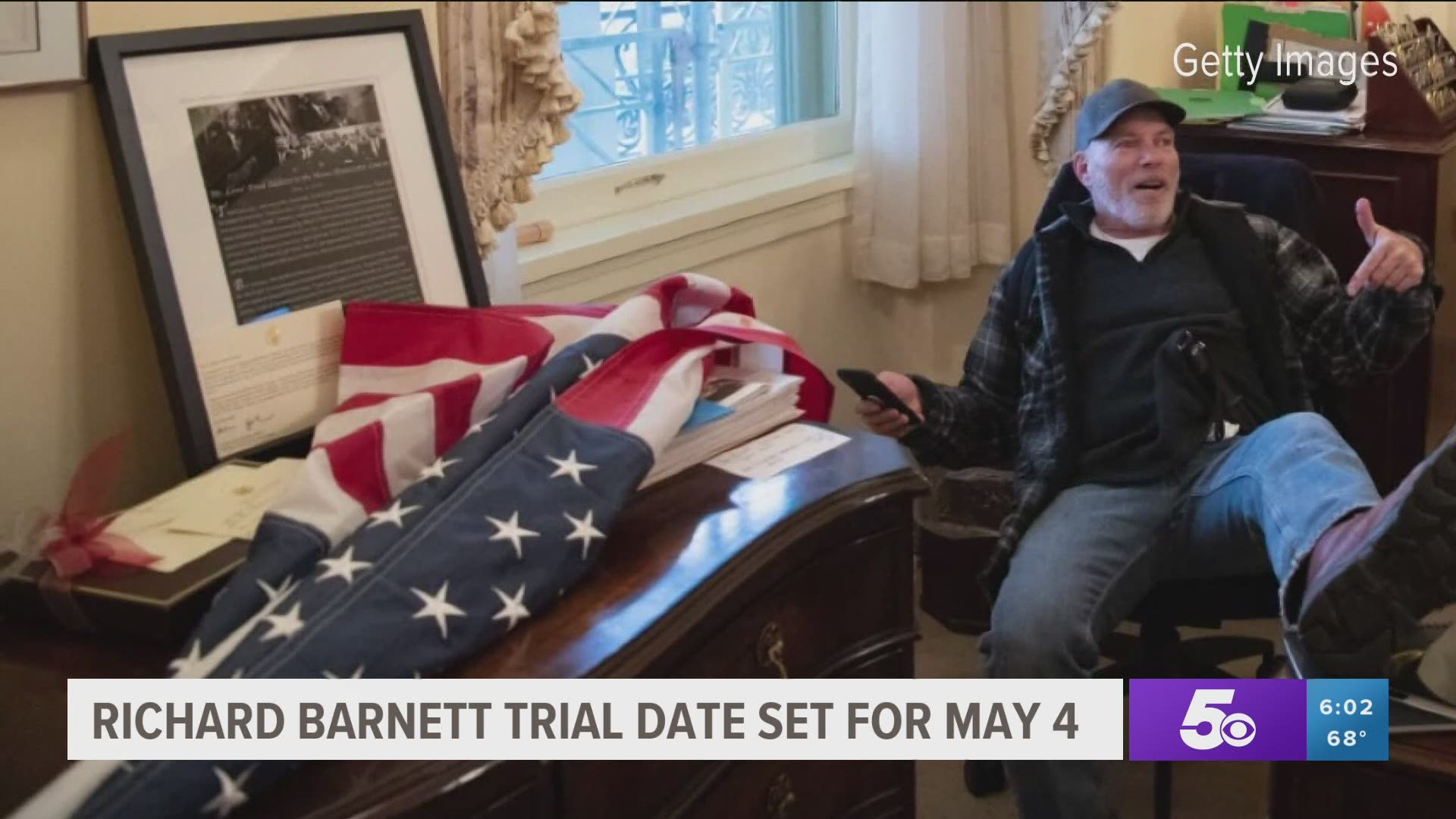 WASHINGTON, D.C., USA — The Northwest Arkansas man spotted in an infamous photo during the Capitol riot in January will be back in front of a federal judge this May.

Richard "Bigo" Barnett first made headlines when he was spotted with his feet on a desk in Nancy Pelosi's office during the riot.

He appeared in front of a federal judge over Zoom due to COVID-19 protocols for a status hearing. His initial lawyer was Anthony J. Siano, and Thursday's hearing was to update his new lawyers, Joseph McBride, Steven Metcalf and Martin Tankleff, on the progression of the case.

Barnett told the judge he was okay with having the hearing over Zoom.

According to court transcripts, Barnett was vocal once he heard his trial was happening in May, saying, "I've been here a month, and they're going to set it for another month, and everybody else is getting out." He then went on to say that it's not fair that he can not have a sidebar with one of his new lawyers, Joseph McBride, and that he does not agree with the May 4 date.

Barnett was given a number to call his lawyer and discuss the new trial date, but in response said: "The government keeps dragging this out and letting everybody else out."

After McBride advised Barnett to stop talking and have the sidebar meeting him over the phone, the judge said Thursday's trial would temporarily be off the record and the Zoom call was paused.

Following the pause, the court session resumed and Barnett and his lawyer agreed to the May 4 date.

Barnett, 60, of Gravette, Ark., pled not guilty to several charges stemming from his actions that day.

Barnett admitted to 5NEWS in an interview that he was inside the Capitol building during the riot and that he stole a letter from a desk in Pelosi's office.

Barnett is being held without bond.

On Jan. 6, 2021, shortly after former President Donald Trump urged his supporters to march down to the U.S. Capitol during a "Stop the Steal" rally, rioters breached police barricades, making their way into the building and inside Senate chambers. The insurrection caused a lockdown, and Congress members, who were in the process of confirming the electoral college votes that would officially make Joe Biden the president-elect, were escorted from chambers. Four people died, and 50 police officers were injured in the chaos.

RELATED: Prosecutors look into Capitol rioter's actions in Northwest Arkansas as they build case against him