Cruz responds to calls for his resignation, talks about riot: 'President’s rhetoric was irresponsible'

Cruz led the charge to challenge the election results. After riots at the U.S. Capitol, some are calling for his resignation. 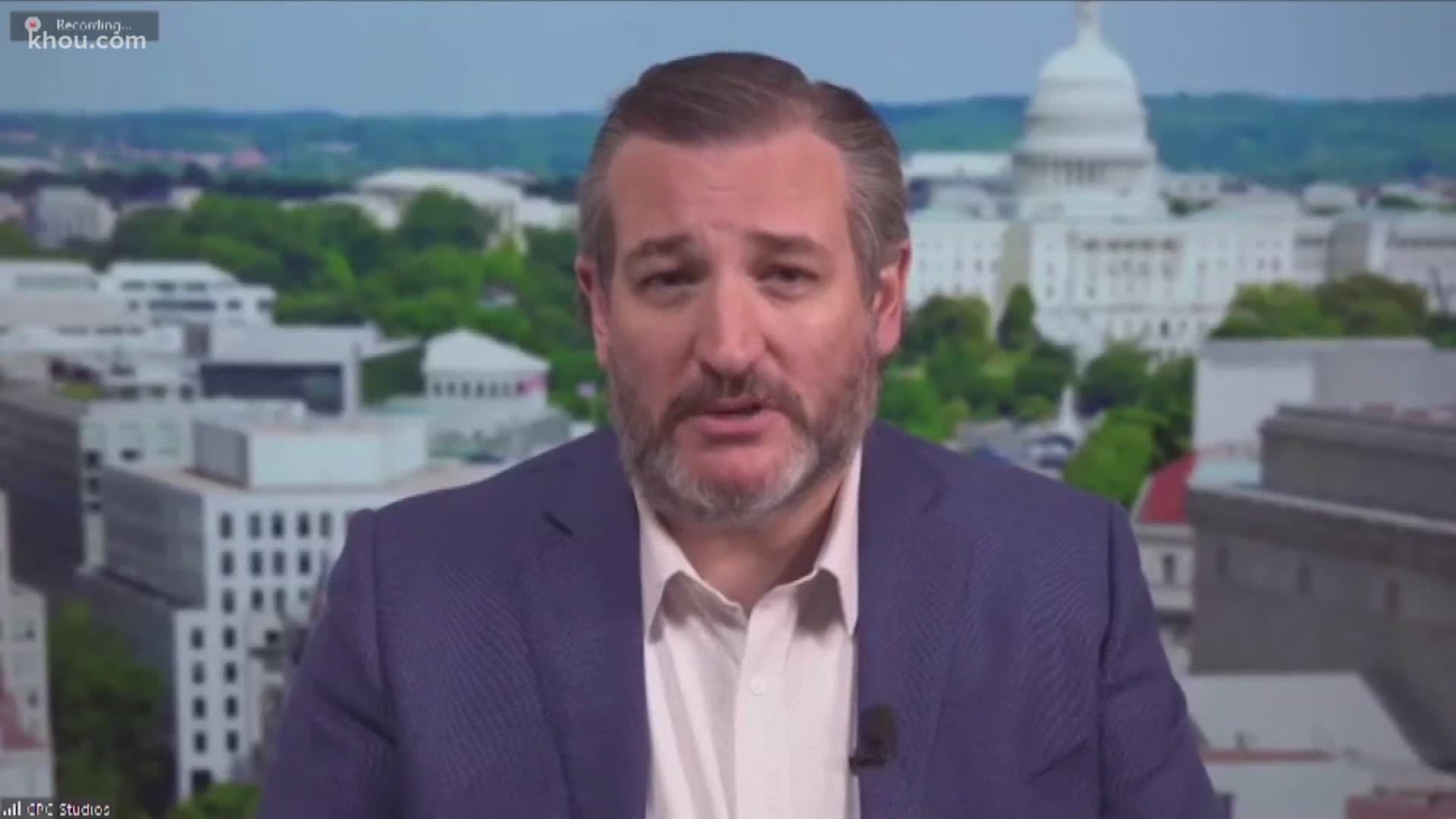 TYLER, Texas — Republican Sen. Ted Cruz of Texas is talking about violence and rioting at the U.S. Capitol building, as some people are calling for his resignation.

Four people died Wednesday when rioters stormed the U.S. Capitol, one who was shot and three others who suffered medical emergencies. A Capitol police officer who responded to the riots died the day after being injured in the riot.

The rioters broke into the Capitol as Congress was confirming the Electoral College votes for President-elect Joe Biden's win.

Cruz was in the Capitol building when the riots broke out.

“We saw a terrorist attack on the United States Capitol,” said Cruz on Thursday. “Everyone who attacked the Capitol should be fully prosecuted and they should spend a long, long time in jail.”

There has been discussion about Vice President Mike Pence invoking the 25th Amendment, which allows for the vice president and a majority of the Cabinet to declare the president unfit for office. The vice president would then becomes acting president. Speaker of the House Nancy Pelosi said if Pence doesn't do it, Congress may move forward with impeachment.

“The president’s rhetoric was irresponsible,” said Cruz. “I think it was reckless and I don’t think it was remotely helpful. I think the calls for extreme action, things like the 25th Amendment, I don’t think that’s going to prove necessary. We have 13 days remaining of the president’s tenure. He will leave office at noon on January 20 and we are now in the process of a peaceful transition of power to the next administration, a Joe Biden presidency.

Fellow Senator Patty Murray became the latest to call for Cruz and Sen. Josh Hawley to resign, accusing them of inciting and supporting the rioters.

"Any Senator who stands up and supports the power of force over the power of democracy has broken their oath of office. Senators Hawley and Cruz should resign," Murray said in a statement.

There have been other calls for Cruz’s resignation for leading the charge to challenge the presidential election. But does he assume any blame for what happened?

“Not remotely,” he said. “What I was doing and what the other senators were doing is what we were elected to do, which is debating matters of great import in the chamber of the United States Senate. I joined with 11 other Senators and we proposed to the Senate that Congress should appoint an electoral commission.”

Biden weighed in Friday on Cruz, saying that he should be voted out in the next election, and that he does bear some of the responsibility of the false claims.

I think they should be flat beaten net time they run,” Biden said in response to a question about whether Cruz and Sen. Josh Holley should resign. “I think the American public has a good clear look at who they are. They’re part of the big lie.”

"It’s interesting to me and I was pleased to hear some of the more prominent Republicans say to me the Ted Cruzes of the world are as responsible in terms of people believing the lies, not as responsible, similarly responsible like Trump, but they didn’t say go to the Capitol. Follow. That’s a different story."

Some Democrats and Republicans charged the audit was a publicity stunt.

“I think that would have enhanced faith and confidence in our democratic system,” Cruz said. “There are serious allegations of election fraud in this last cycle and tragically recent polling shows 39% of Americans believe the election was rigged and that's heartbreaking. By the way, that's not just Republicans.  31% of independents believe that. 17% of democrats believe that.”

Cruz is referring to a November Reuters/IPSOS political opinion poll which includes a question asking respondents if they were “concerned the election is rigged.”

Cruz went on to describe the chaos in the Senate chamber as rioters stormed into the Capitol building.

“When this terrorist attack happened, it was a traumatic experience for everyone in the building and everyone across the country. I can tell you about the experience. We were on the Senate floor. All 100 Senators were seated at our desks. Vice President Pence was presiding, Senator James Lankford  -- a Republican from Oklahoma -- was speaking.  And as he’s speaking, we suddenly saw the secret service rush in and escort the VP out of the room and we’re kind of looking around, what’s going on, what’s happening.

"Then more law enforcement came in and capitol police came and we halted the proceedings and they barricaded the doors. And so we didn’t know what was happening. When the assault began, we were in the Senate chamber, had no idea what was happening outside. Initially, they barricaded us in the Senate Chamber with armed law enforcement officers protecting the chamber. Ultimately what they ended up doing was removing everyone from the Senate chamber and moving us to a secure third location that was away from the chambers that as you know, tragically, the terrorist broke into the chamber. They did damage. It was horrific.”