It’s part of an overall effort by President Joe Biden to lead by example on the coronavirus pandemic, an ethos that carries over from his campaign and transition. 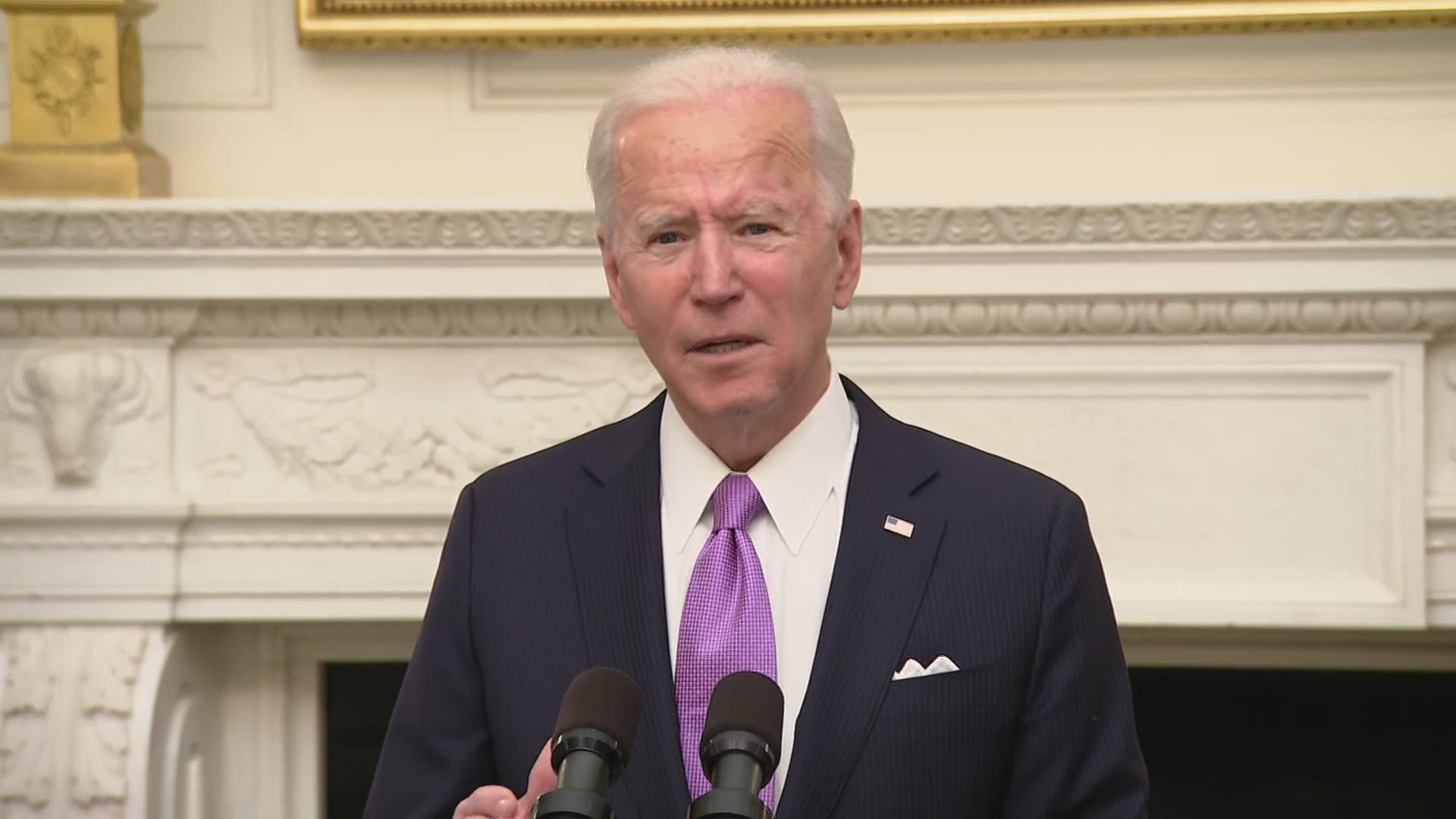 WASHINGTON — Testing wristbands are in. Mask-wearing is mandatory. Desks are socially distanced.

The clearest sign that there's a new boss at the White House is the deference being paid to coronavirus public health guidlines.

It’s a striking contrast to Donald Trump’s White House, which was the epicenter of no less than three separate outbreaks of COVID-19, their true scale not fully known because aides refused to discuss cases publicly.

While the Trump administration was known for flouting safety recommendations, the Biden team has made a point of abiding by the same strict guidelines they’re urging Americans to follow to stem the spread of the virus.

It’s part of an overall effort from President Joe Biden to lead by example on the coronavirus pandemic, an ethos carried over from his campaign and transition.

“One of the great tragedies of the Trump administration was a refusal to recognize that many Americans model the behavior of our leadership," said Ben LaBolt, a former press secretary to President Barack Obama who worked on the Biden transition.

“The Biden administration understands the powerful message that adhering to their own guidelines and modeling the best public health behavior sends, and knows that that’s the best path to climbing out of this until we can get a shot in the arm of every American.”

To that end, most of Biden’s White House staff is working from home, coordinating with colleagues by email or phone. While the White House aims to have more people working onsite next week, officials intend to operate with substantially reduced staffing for the duration of the pandemic.

When hundreds of administration staffers were sworn in by Biden on Wednesday, the ceremony was virtual, with the president looking out at team members displayed in boxes on video screens.

The emphasis on adhering to public safety guidelines touches matters both big and small in the White House.

Jeffrey Wexler is the White House director of COVID-19 operations, overseeing the implementation of safety guidelines throughout the administration, a role he also served during the transition and campaign. During her first press briefing, White House press secretary Jen Psaki suggested those working in the office would receive daily testing and N95 masks would be mandatory.

Indeed, Biden's new federal mask mandate executive order requires that federal employees, contractors and others in federal buildings and on federal lands wear masks and adhere to social distancing requirements. The executive order allows for agency heads to make “case-by-case exceptions" — like, for instance, Psaki's. She wears one until she steps up to the podium for briefings.

Officials in close contact with Biden wear wristbands to signify they have been tested that day. Every event with the president is carefully choreographed to maintain distancing, with strips of paper taped to the carpet to show the likes of Vice President Kamala Harris and Dr. Anthony Fauci where to stand when Biden is delivering an address.

When Biden met with his COVID team in the State Dining Room on Thursday, the five people in the room sat at individual tables placed at least six feet apart and four others joined by Zoom to keep numbers down.

Plexiglass barriers have been set up at some desks that are in open areas, but nearly all staff who are already working in the building have enclosed offices. The Biden team already had a robust contact tracing program set up during the transition, which it's keeping around for any possible exposures.

Staffers also were issued laptops with wallpaper displays that offer a list of COVID symptoms and a directive to “call the White House medical unit” if they have experienced any of them.

The Trump White House was another story altogether.

After one virus scare in May, the White House mandated mask-wearing, with a memo from chief of staff Mark Meadows requiring their use in shared workspaces and meetings. Simple surgical masks were placed at the entrance to the West Wing.

But after only a few days of moderate compliance, mask-wearing fell away almost entirely, as Trump made it clear to aides he did not like the visual of people around him wearing masks — let alone wearing one himself.

Trump’s White House reduced staffing capacity during the earliest days of the pandemic, but by late spring, when Trump was intent on projecting that the country was “reopening” from pandemic lockdowns — and the U.S. was at roughly 80,000 deaths — aides quickly resumed normal operations. That provided ideal conditions for the spread of an airborne virus.

RELATED: VERIFY: What happens if I get the 1st dose of the COVID-19 vaccine but delay the 2nd?

RELATED: Fauci: US revives support for WHO, agrees to global vaccine program

It was only after Trump himself tested positive that some aides began staggering their work schedules to provide enhanced distancing and contingencies in case someone tested positive.

Those working for the new administration welcome the stricter guidelines now, but they do pose some potential complications as the Biden team builds out its operation.

Karen Finney, who was a spokeswoman in the Clinton White House, said the first challenge may simply be creating a cohesiveness and camaraderie when some new staffers are brought on board without ever having worked in the same room.

“When you sit in the same office as everyone, it’s just a different dynamic," she said. “There's a sense of, ‘We’ve got each other's backs, we're going to be working together on this.'”

Finney added that most of the staff are used to working remotely at this point, so it's not necessarily a new challenge. But she allowed that the national COVID response itself could be somewhat hamstrung by the COVID requirements at the White House.

“Having to coordinate between limited staff in the office, those working remotely, along with governors, mayors, their staff, those on the Hill — it’s a challenge,” she said. “They’ve had the time to think through how to do some of this, but look, it’s going to be a work in progress."