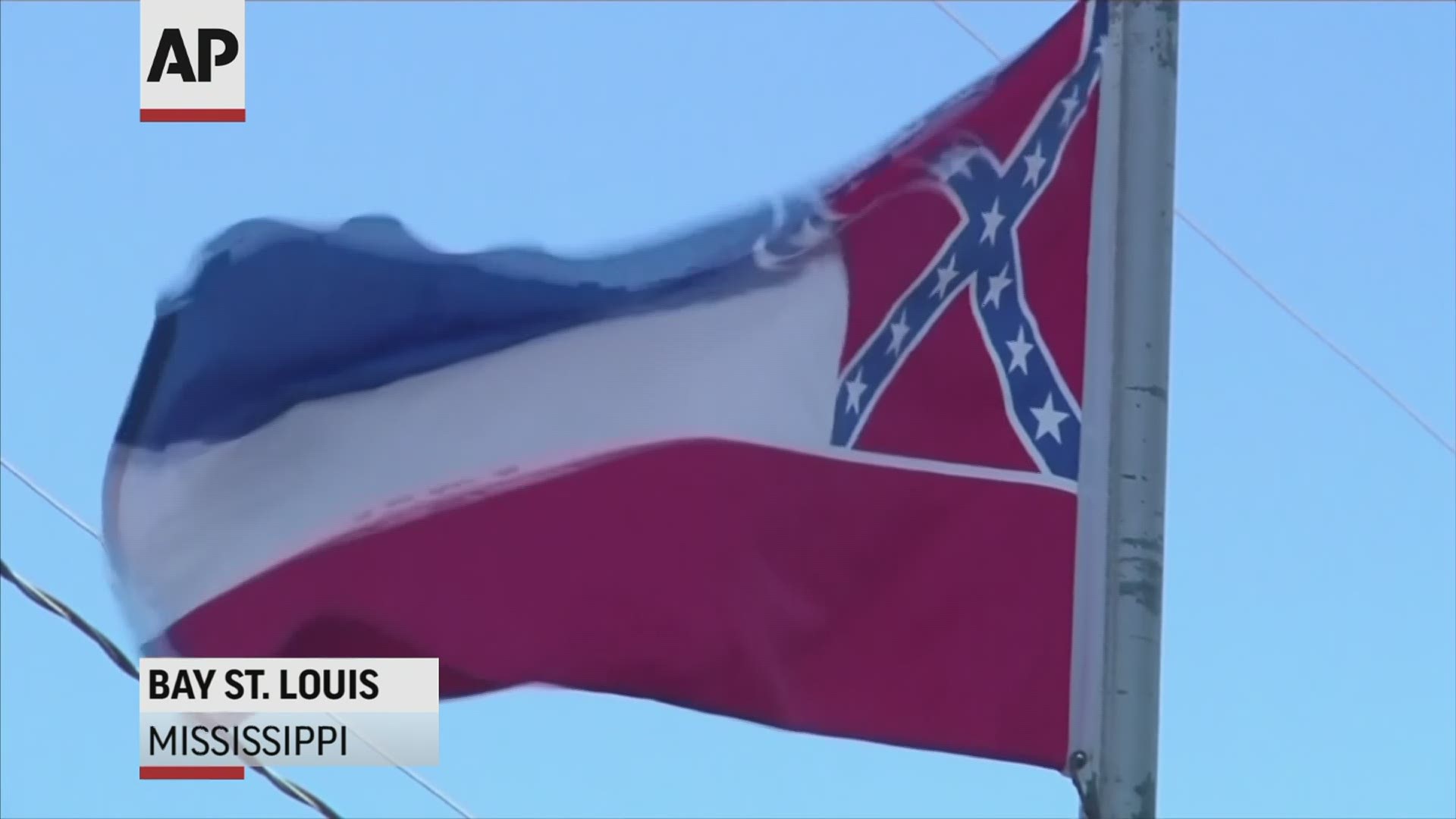 MISSISSIPPI, USA — Update: Mississippi legislators have voted to raucous cheers and applause to remove a Confederate battle emblem from their state flag. Mississippi's House and Senate took historic votes Sunday to retire the flag adopted in 1894. It's the last state flag that included a Confederate symbol that many people condemn as racist. Republican Gov. Tate Reeves has said he will sign the bill.

The change comes amid widespread protests over racial injustice. Mississippi has a 38% Black population. A commission would design a new flag that cannot include the Confederate symbol but must have the words "In God We Trust." Voters will be asked to approve the new design in the Nov. 3 election.

Previous story: After calls from retail giants, religious leaders and native celebrities, Mississippi lawmakers broke a deadlock and approved a resolution to suspend legislative deadlines to introduce a bill that calls for a commission to redesign the 126 year old state flag that is the last in the nation to include a Confederate emblem.

The Mississippi House voted 85-13 in favor of the resolution while the Senate approved it 36-14. Both met the two-thirds majority by slim margins.

“Whether we like it or not, the Confederate emblem on our state flag is viewed by many as a symbol of hate," House Speaker Pro Tem Jason White said before the vote Saturday. "There is no getting around that fact."

The resolution suspends legislation deadlines in place so that a bill, "An Act to Establish a Commission to Redesign the Mississippi Flag", can be introduced, debated and voted on.

That vote could take place as soon as Sunday.

"The argument over the 1984 flag has become as divisive as the flag itself and it's time to end it," Gov. Tate Reeves tweeted Saturday. "The job before us is to bring the state together, and I intend to work night and day to do it."

Reeves had previously opposed changing the flag unless Mississippi voters approved it. In 2001 voters overwhelming rejected calls to change the flag.

Last Tuesday, Walmart said it would no longer display the state flag in its stores because of the Confederate emblem. That same day the Mississippi Baptist Convention called for a new flag saying lawmakers have a moral obligation to remove the controversial Confederate emblem.

Country music star and Mississippi native Faith Hill has used her social following to support legislation to change the flag.

"I understand many view the current flag as a symbol of heritage and Southern pride, but we have to realize that this flag is a direct symbol of terror for our black brothers and sisters," Hill went on to say.

If the House and Senate approve the bill, which only requires a simple majority in each chamber instead of the two-thirds required for the resolution, a new commission will be formed. They will have until September 14, 2020, to submit a new design that will then go to Mississippi voters to approve or reject on election day in November.

The bill requires that the design remove the Confederate battle flag and include "In God We Trust".

If voters reject the design, the design process starts over.

Across the U.S. Confederate monuments and symbols are being removed. NASCAR has banned the Confederate battle flag at all of its events and cities across the country have seen statues honoring Confederate generals forced down.

The transformation across the U.S. culture follows protests against racial injustice and police brutality sparked by the death of George Floyd in Minneapolis. Floyd died in police custody after officers held him to the ground with a knee to his neck for more than eight minutes.

RELATED: NCAA: No championships in states with confederate symbol