Republican leader Mitch McConnell issued his warning a day after the Senate approved a $480 billion boost in the federal debt limit through December. 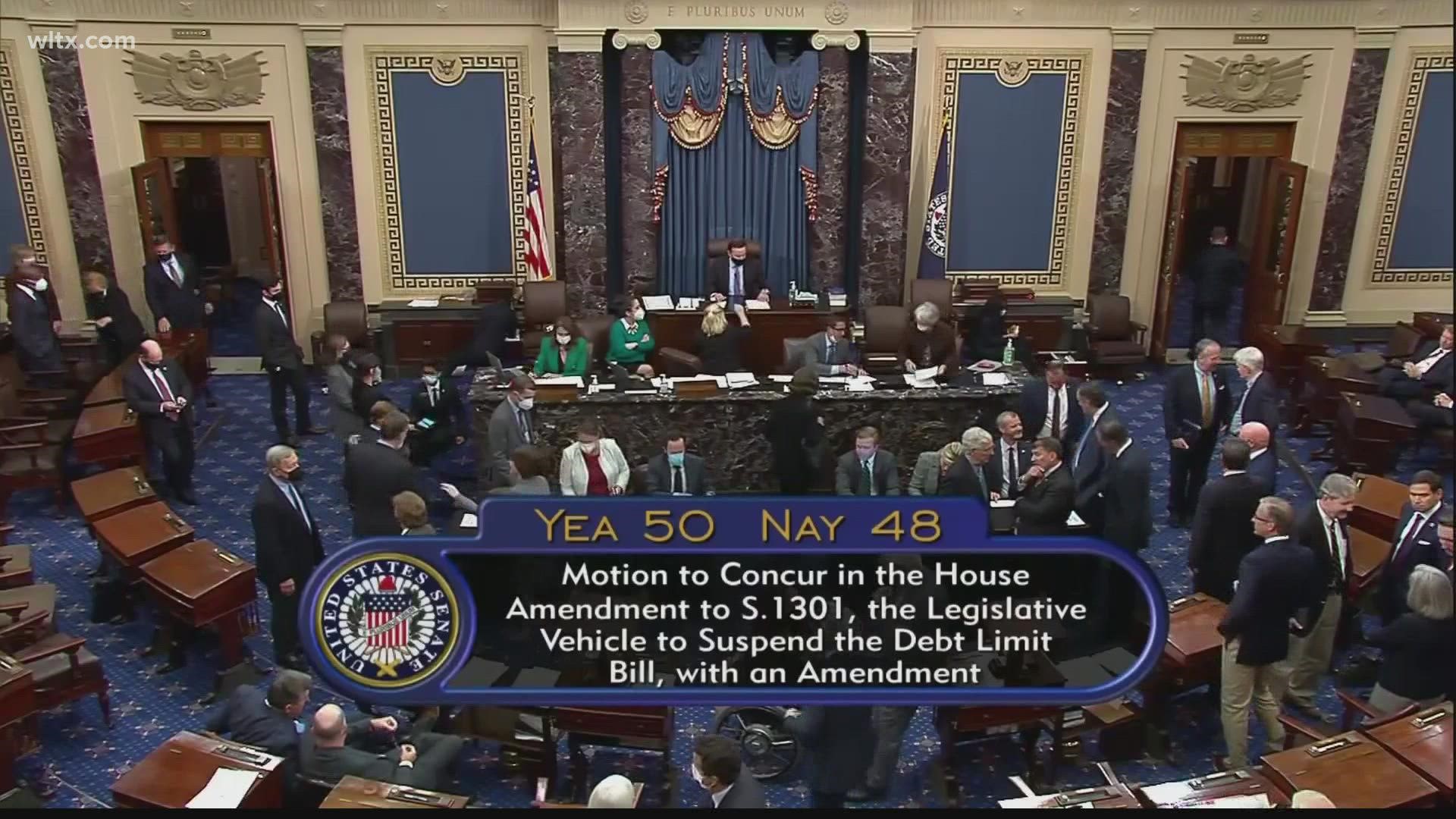 WASHINGTON — Senate Minority Leader Mitch McConnell said Friday that he would not again help Democrats extend the government's borrowing authority, raising fresh doubts about how Congress will avert a federal default when a temporary patch expires in December.

McConnell issued his warning in a letter to President Joe Biden a day after the Senate approved a $480 billion boost in the federal debt limit, enough to last about two months. In an eleventh-hour turnabout, the Kentucky Republican was among 11 GOP senators who provided decisive support Thursday for a procedural move that opened the door for subsequent Senate passage of that measure with only Democratic support.

Some GOP senators criticized their leaders not holding out longer against Democrats' efforts to extend the debt limit, which they said would have sharpened their message that a still-developing multibillion-dollar package of Biden's top domestic priorities is wasteful and damaging to the economy.

McConnell said Friday that he made his decision to refuse future help because of his opposition to the huge domestic bill and because of a “bizarre spectacle" on the Senate floor by Majority Leader Chuck Schumer, D-N.Y. After the bill passed, Schumer criticized Republicans for trying to push the country over “the cliff's edge" by opposing the debt limit extension.

“In light of Senator Schumer’s hysterics and my grave concerns about the ways that another vast, reckless, partisan spending bill would hurt Americans and help China, I will not be a party to any future effort to mitigate the consequences of Democratic mismanagement," McConnell wrote.

.@SenSchumer: "Our caucus held together and we pulled our country back from the cliff's edge that the Republicans tried to push us over." pic.twitter.com/98fF9hSQUE

One theoretical way is for them to change Senate rules and shield debt limit legislation from GOP filibusters, delays that require 60 votes to overcome in the 50-50 Senate. But at least two Democratic senators, West Virginia's Joe Manchin and Arizona's Kyrsten Sinema, have said they oppose doing that, effectively thwarting that option.

McConnell's letter included a string of insults aimed at Schumer, a remarkable broadside by one Senate leader against another.

“Last night, in a bizarre spectacle, Senator Schumer exploded in a rant that was so partisan, angry, and corrosive that even Democratic Senators were visibly embarrassed by him and for him,” McConnell wrote. “This tantrum encapsulated and escalated a pattern of angry incompetence from Senator Schumer.”

McConnell added: “This childish behavior only further alienated the Republican members who helped facilitate this short-term patch. It has poisoned the well even further."

Since summer, McConnell repeatedly said Republicans would not assist Democrats in pushing a debt ceiling extension through the Senate by helping them reach the 60 votes needed for most legislation. He cited Democrats' proposed 10-year, $3.5 trillion social, economic and tax measure, which Republicans unanimously oppose.

Hours before Thursday’s vote, McConnell reversed course and proposed a short-term extension into December. Without a renewal of federal borrowing powers, the Treasury Department had projected it would run out of cash to pay the government’s bills by Oct. 18.

If the government depletes its legal ability to borrow money, financial analysts have warned that it could deliver a serious blow to the U.S. and global economy and cause delays in government payments to Social Security recipients and others.

McConnell has insisted that Democrats can raise the debt ceiling by themselves by employing the same special budget process they’re already using for their enormous domestic spending and tax measure. Those procedures forbid filibusters from being used against certain bills.

Democrats say they won’t use that process, which they call too cumbersome. But it would also require them to raise the debt limit by a specific dollar amount that, they fear, Republicans will make a staple of campaign ads attacking them.

Democrats accused McConnell of creating a potential financial crisis. They noted that the current federal debt of around $28 trillion is to cover spending that's already been approved, including around $7 trillion under former President Donald Trump.

McConnell said it was Democrats who prompted the problem because he had warned them since summer that they would have to approve the debt limit extension on their own. Before Thursday, the House had approved debt ceiling extensions but Republicans blocked them in the Senate.

After the $480 billion borrowing extension cleared the procedural hurdle thanks to GOP support Thursday, the Senate gave it final approval by 50-48 with only Democratic votes. Final congressional approval of the Senate-passed short-term debt ceiling extension is expected Tuesday by the House.

After the Senate vote, Schumer lauded Democrats for overcoming “this Republican-manufactured crisis. Despite immense opposition from Leader McConnell and members of his conference, our caucus held together and we have pulled our country back from the cliff’s edge that Republicans tried to push us over.”