The officer was taken to Mercy Hospital in Bella Vista with a pellet and fragments close to an artery. Surgery is scheduled next week to take the pellet out. 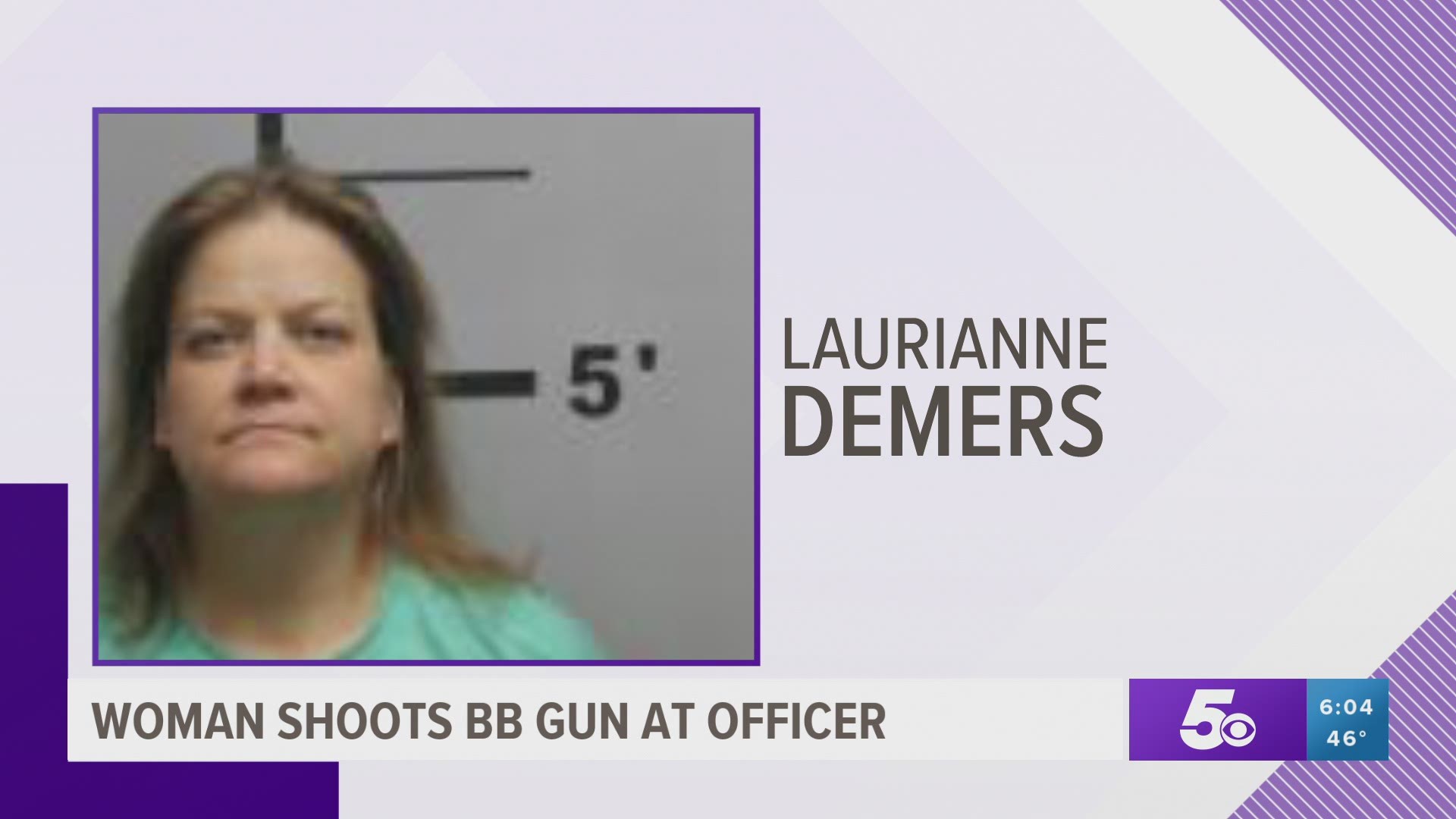 The phone call came from a neighbor who said he saw 51-year-old Laurianne Demers aiming and shooting at another neighbor's house.

Sgt. Ross Conn, Officer Cummins and Officer King arrived on the scene and parked down the road.

According to a report, Sgt. Conn sent Officer Cummins to the back of the home while Officer King stayed at the front of the house in the tree line, amongst the vehicles in the driveway.

While approaching the house, Conn could hear loud music and Demers talking and yelling inside the home.

Conn said facing the home, there was a rock wall, about three feet high, secluding the porch from the rest of the yard and driveway with a gate in the front. Conn unlocked the front gate, opened it and then moved to the left side of the house on the opposite side of the wall, about eight feet away from the front door.

The report states he knocked on the side paneling near a window and announced that he was a Bella Vista Police Officer and asked Demers to come outside.

Conn announced a few more times before she opened the front door. When the door opened, Conn again identified himself as a Bella Vista Police Officer.

The report states that Demers walked out of the front door a few feet and had what appeared to be a rifle in her arms pointed towards the ceiling.

Conn had his pistol drawn and pointed at her at this time.

The report states that Demers said "hello" when she came out, and Conn responded by saying "hello" while having the gun pointed at her.

At that time Conn said he observed the rifle she was holding, noticed it had a red dot optic on top of it with no chamber to load rounds into the rifle.

According to Conn, a moment later Demers uttered "something unintelligible" and began to lower the gun in his direction. He told Demers to not point the gun at him, and she continued to do so.

The report states with fair certainty that the gun was a pellet gun, Conn moved back to get cover and concealment next to the wall of the home. As he was moving, she fired the gun and struck the upper portion of his right forearm and lower wrist area.

The gunshot confirmed that it was a pellet gun.

Conn again pointed his gun at her ordering her to drop the gun. He told Officer King it was a pellet gun and told him to get her.

Knowing the rifle was a pellet gun and she had just expended her only round, Conn said he was certain that she had no more ammo in the pellet gun.

Demers allegedly began to walk back into the home and Officer King rushed towards her, got the rifle away from her and placed her under arrest.

The officers cleared the home to make sure no one was inside. At that time, a crossbow was found a few feet inside the home. The report states the crossbow was loaded with an arrow, locked back ready to fire, with several other arrows affixed to the bows quiver and in the home.

Two trays of lead .177 diameter pellets filled with hundreds of pellets were also found about 10 feet into the home on a small wire shelf.

Officer King said he recognized Demers because of previous encounters with her and that she had been known to be mentally unstable with psychiatric issues. According to Officer King, Demers has been known to be violent and possess possible weapons in her house.

According to the report, when King was with Demers, he said he observed a very strong odor of intoxicants coming from her breath. According to King, Demers could hardly walk on her own without escort, had extremely slurred speech and bloodshot, watery eyes. She allegedly admitted to King that she had been drinking.

Medics arrived on the scene to look at Conn’s injuries and he had blood coming from the wound on his wrist. He was taken to Mercy Hospital in Bella Vista.

The pellet was found in the skin, however, the pellet and the fragments are close to an artery, according to the report.

A surgeon will be needed to take the pellet out. The fragments will likely be left as it is too close to the artery to be removed. The surgery is scheduled for some time next week.

She was taken to the Benton County Jail to be held for a bond hearing.

This investigation is still ongoing.