Karla Reedy was arrested and charged with Endangering the Welfare of a Minor Second Degree. 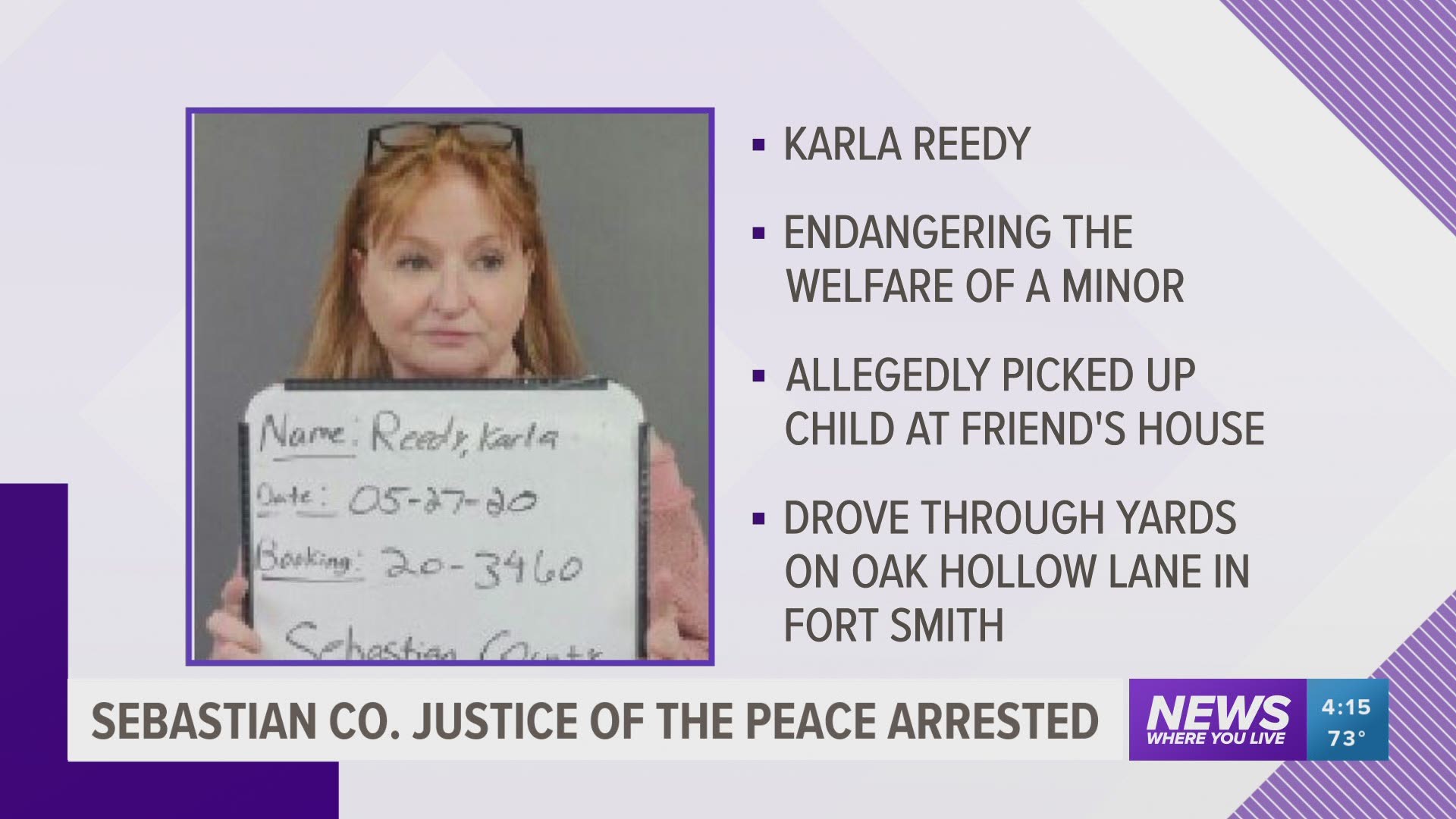 FORT SMITH, Ark. — Sebastian County Justice of the Peace Karla Reedy turned herself into police following an alleged drinking and driving incident that happened in April.

On Tuesday, April 21, officers were dispatched to Oak Hollow Lane in Fort Smith in reference to an intoxicated subject. The caller said that a driver picked up a child and was driving through yards and was currently on Oak Hollow Lane.

The neighbor told officers Karla Reedy was the driver.

When officers arrived at Reedy's home, she greeted them at the door with bloodshot watery eyes and slurred speech, according to an incident report.

When asked what happened, Reedy stated she wasn't driving but that she had gone to pick up the child from a friend's house. She would not give any other information about what happened, according to officers at the scene.

Officers spoke with the child who said they were helping a neighbor walk a dog, and that they had gone to a friend's house. The child told the officers Reedy had come to pick them up and could tell that she had been drinking once they got inside the car, according to police.

The child said Reedy took off driving through the neighborhood and would not stop. The minor said they drove past their house and when they were in the cul-de-sac, the child jumped out of the vehicle.

The child told officers they did not feel safe and walked back to their friend's house.

The officers at the scene contacted DHS.

While waiting for DHS, Reedy informed the officers she was a Justice of the Peace for District 13 and that she had called County Judge David Hudson about what was going on. She also told the officers that they were in a gated community that was private property and they had no right being there.

Officers then took statements from witnesses at the scene who said Reedy did a "burn out" in the road before speeding through the neighborhood and driving through yards.

The child was released to another family member.

On Wednesday, May 27, Reedy turned herself in to the Sebastian County Sheriff's Office for a warrant with the agency.

According to Sebastiantion County Jail records, Reedy was arrested and charged with Endangering the Welfare of a Minor Second Degree. She has bonded out since then.

Reedy was appointed the Justice of the Peace position after her husband passed away.

RELATED: Officials say Fort Smith has plenty of COVID-19 tests, just not as many people need it