The Former White House Press Secretary's rally was a part of her 15-stop freedom tour across Arkansas to promote her run for Governor. 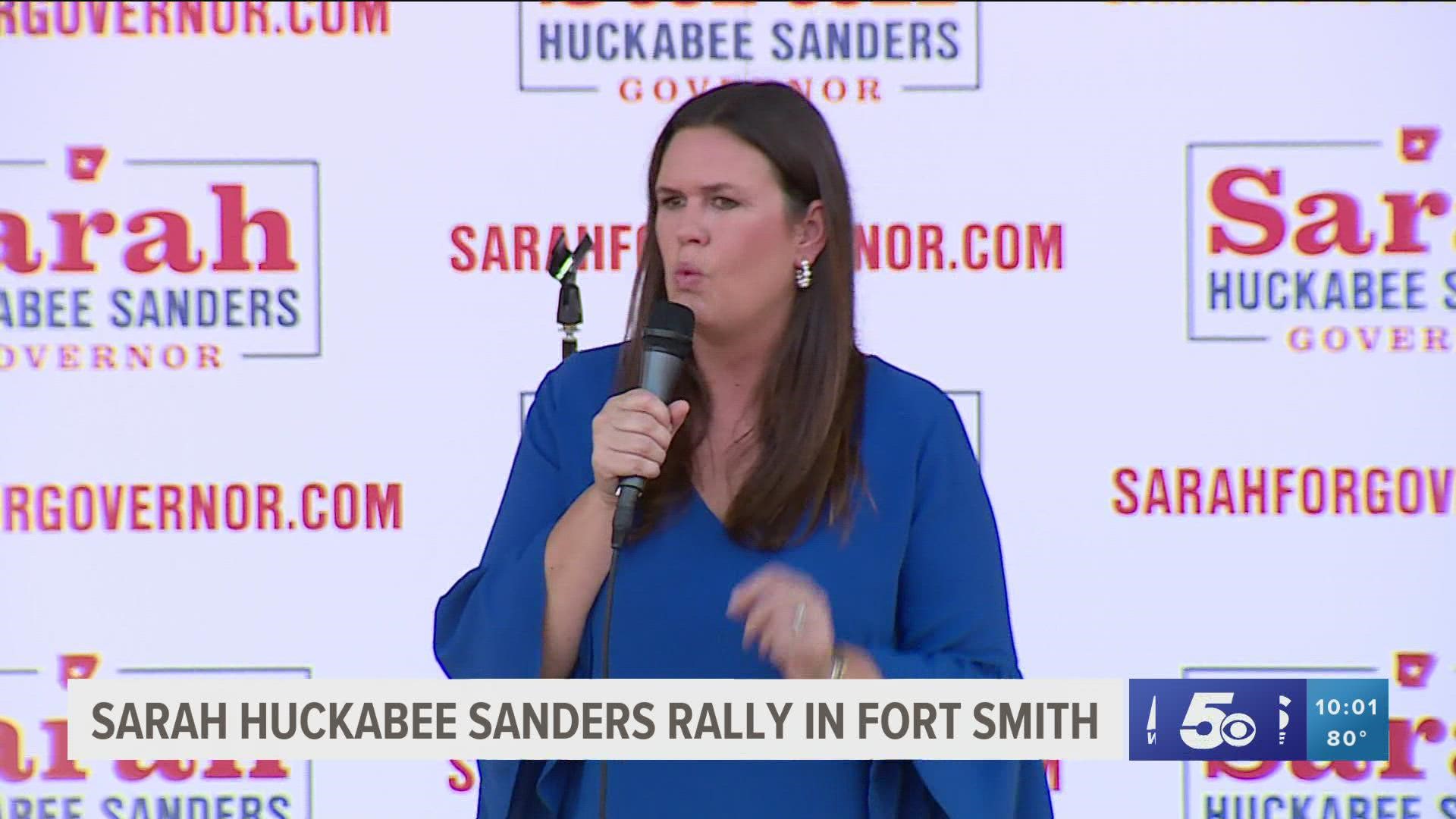 FORT SMITH, Ark. — The race for Arkansas’ next governor is on as current Governor Asa Hutchinson reaches his term limit, some candidates are already campaigning.

Sanders spoke to the Fort Smith crowd for about 30-minutes about her run for Governor of Arkansas.

"I feel very confident in my ability to lead our state. What we need right now is somebody who can both be A fighter, to push back against the radical left in Washington," said Sanders.

Sanders says as Governor of Arkansas she will work hard for the state which has gained her support from local residents.

"Because of her history with Trump and with the press. How she handled herself with the press and the White House. I really felt like she was strong," said Allen Hicks who attended Sanders' rally.

Sanders also spoke about local issues such as combating the low Arkansas COVID-19 vaccination rates and how she would react as governor with ACT 10-02, which banned public entities from enforcing mask requirements. Sanders says it's about choice and local control.

“The most important control that we can have is local control. There’s nothing more local than a parent being able to make a decision about what’s best for their kids," said Sanders.

She concluded with speaking about possibly getting rid of the Arkansas personal income tax if she were elected governor.

“We have to be very responsible in this process. Which is why I think that a phase-out plan works best. And there’s not anyone thing but a collection of things that we need to do," said Sanders.

5News also spoke with the Arkansas Attorney General and candidate for the Governor of Arkansas Leslie Rutledge via Zoom.

When asked about what she was doing to let Arkansans know why she should be their pick for governor, Rutledge spoke about her public service to Arkansas and how she plans to continue working on the behalf of Arkansans.

"But I think it is important for Arkansans to know that I announced my campaign last July and since July I've met with thousands of Arkansans talking to them about issues that matter. I didn't just wake up yesterday and decide to start campaigning in Arkansas," said Rutledge. "I've been living, breathing and working on behalf of Arkansans my entire life and for the last seven years as the Attorney General and I am going to keep doing that as the Governor of the great state of Arkansas.

Rutledge also spoke her top list of issues about opportunities to improve Arkansas.

"The COVID-19 pandemic has taught us so many things. so many challenges that also taught us the importance of broad ban for education as well as economics," said Rutledge. "We need to eliminate the personal income tax in the state of Arkansas to be able to compete with states such as Texas and Tennesse and the Southern region of the United States."

Rutledge also spoke about what Arkansans need in a governor and says a leader is what the state needs.

"It's important for Arkansans to know that experience matters and that when your running to be the Governor of the great state of Arkansas, we cant run on name-alone and snarky tweets," said Rutledge. "We've got to have someone to lead now, lead today, through a pandemic, and make Arkansas first."

Arkansas will decide the next governor in November of 2022. So far, seven people vying for the state’s top spot.