"States across America have shut down church services and even outlawed singing in church. It’s time for the Church to rise up with one voice..." 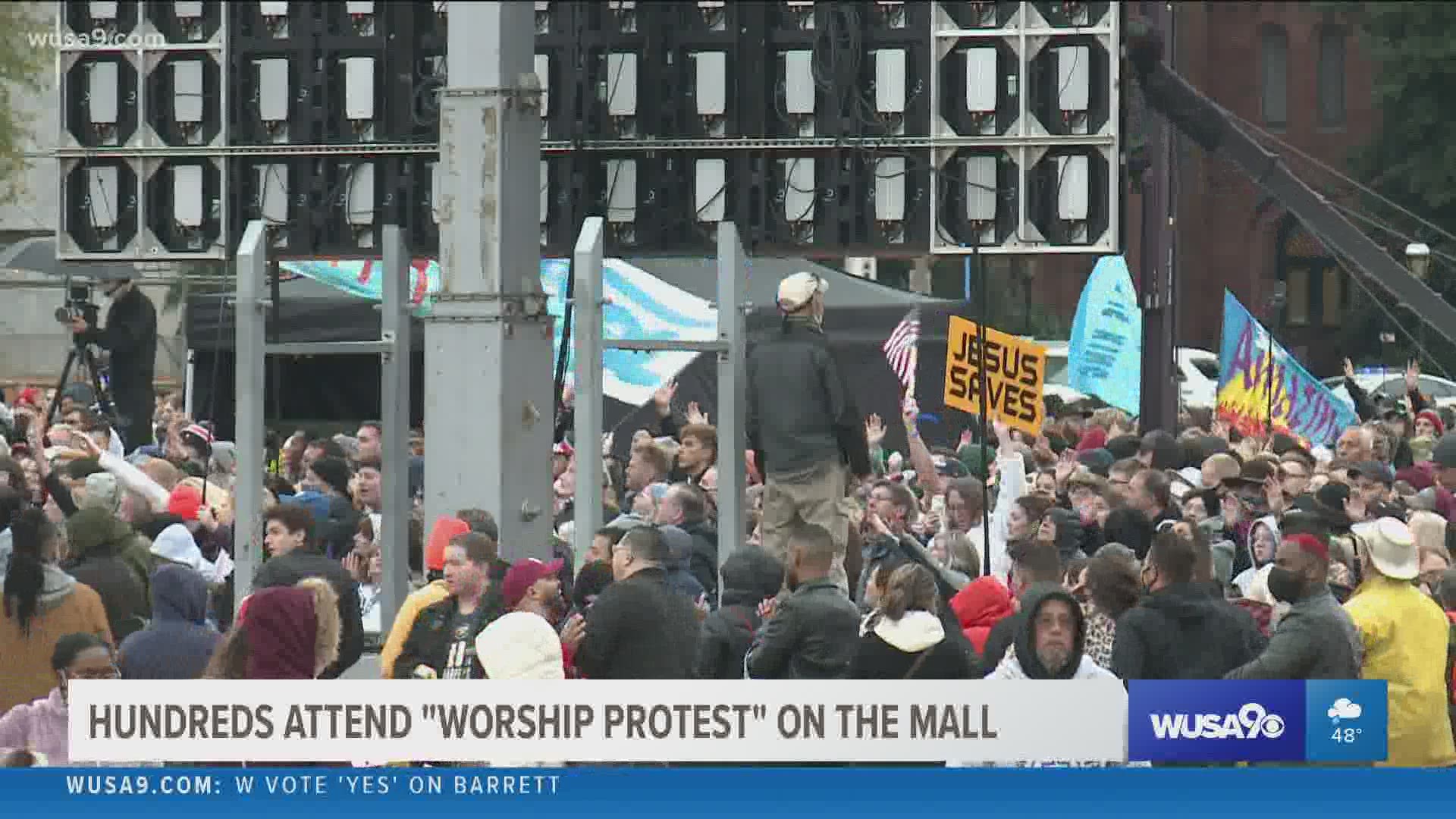 WASHINGTON — Hundreds of people gathered on the National Mall Sunday evening to participate in a "worship protest" organized by Evangelical singer Sean Feucht, as a form of protest against the restrictions placed on churches during the pandemic. There was prayer, singing and baptisms, but virtually no social distancing or mask-wearing.

Sunday's event was the final stop of Feucht’s “Let Us Worship” tour, which has seen Feucht leading worship concerts all across the country over the past few months, demanding that churches be reopened. Past events have been held in Nashville, Pittsburgh, Orlando, Charleston and Colorado Springs.

"States across America have shut down church services and even outlawed singing in church," Feucht's website says, describing the impetus for his tour. "Instagram and Twitter is censoring Christian voices every single day ... It’s time for the Church to rise up with one voice and tell our government leaders and the rulers of big tech that we refuse to be silenced!"

Feucht chronicled his time in D.C. on his Twitter account, including a visit to the White House, and several impromptu worship concerts around town, where attendees were mostly maskless.

"It was supposed to be a small group of leaders hippie style on the grass and turned into 1000+ friends," Feucht said of one "communion" held on the Mall Saturday. "Man oh man if this is any indication of tomorrow ..."

It was supposed to be a small group of leaders hippie style on the grass and turned into 1000+ friends (watch full thing on Facebook).

Man oh man if this is any indication of tomorrow then 😳🗝🦅🚀#LetUsWorship pic.twitter.com/CsriWAXjvL

Sen. Josh Hawley (R-MO) took the stage to pray over Supreme Court nominee Jude Amy Coney Barrett, whose Senate confirmation is expected Monday. Feucht himself has run for political office, losing in the primaries in a race for California’s 3rd Congressional District.

Huge privilege to be on the Mall tonight with thousands & thousands of Christians gathered to worship & pray #LetUsWorship pic.twitter.com/UhcUKHgurW

Feucht’s tour has received criticism from not only public health officials but from other faith leaders – as participants, including Feucht's staff, are seen not wearing masks or abiding by social distancing restrictions per CDC.

The permit for Feucht's event lists a COVID-19 mitigation plan that includes masks and gloves for the crew, sanitization of high-touch areas backstage, sanitation stations outside portable restrooms, and "a sign placed at the table where we will give away Bibles."

Thank you to all who came and joined online. We lit up the sky tonight in DC for King of Kings and the Lord of all Lords!

The National Park Service said they have posted signs throughout the National Mall highlighting the CDC's recommendations and are asking visitors to follow that guidance to prevent the spread of coronavirus.

RELATED: 15,000 expected at National Mall for a 'worship protest' this Sunday. Here's what you can expect

STARTING THE DAY OFF ON THE STEPS OF THE SUPREME COURT WITH THOUSANDS!! 🙏🏽 #LetUsWorship pic.twitter.com/u6TfRRUHWH

The District remains in Phase 2 of their reopening plan, as Mayor Muriel Bowser announced earlier this month that the District's Public Health Emergency order has been extended until Dec. 31, 2020. Currently, in Phase 2, mass gatherings are only permitted up to 50 people. Certain activities, like churches, are allowed to increase that number if requested and approved from a waiver.

1 / 6
AP
Worshipers have a moment of prayer as Christian musician Sean Feucht of California sings during a rally at the National Mall in Washington, Sunday, Oct. 25, 2020. (AP Photo/Jose Luis Magana)