Saturday saw some of the worst person-on-person violence since protests began. But Portland police had limited presence. 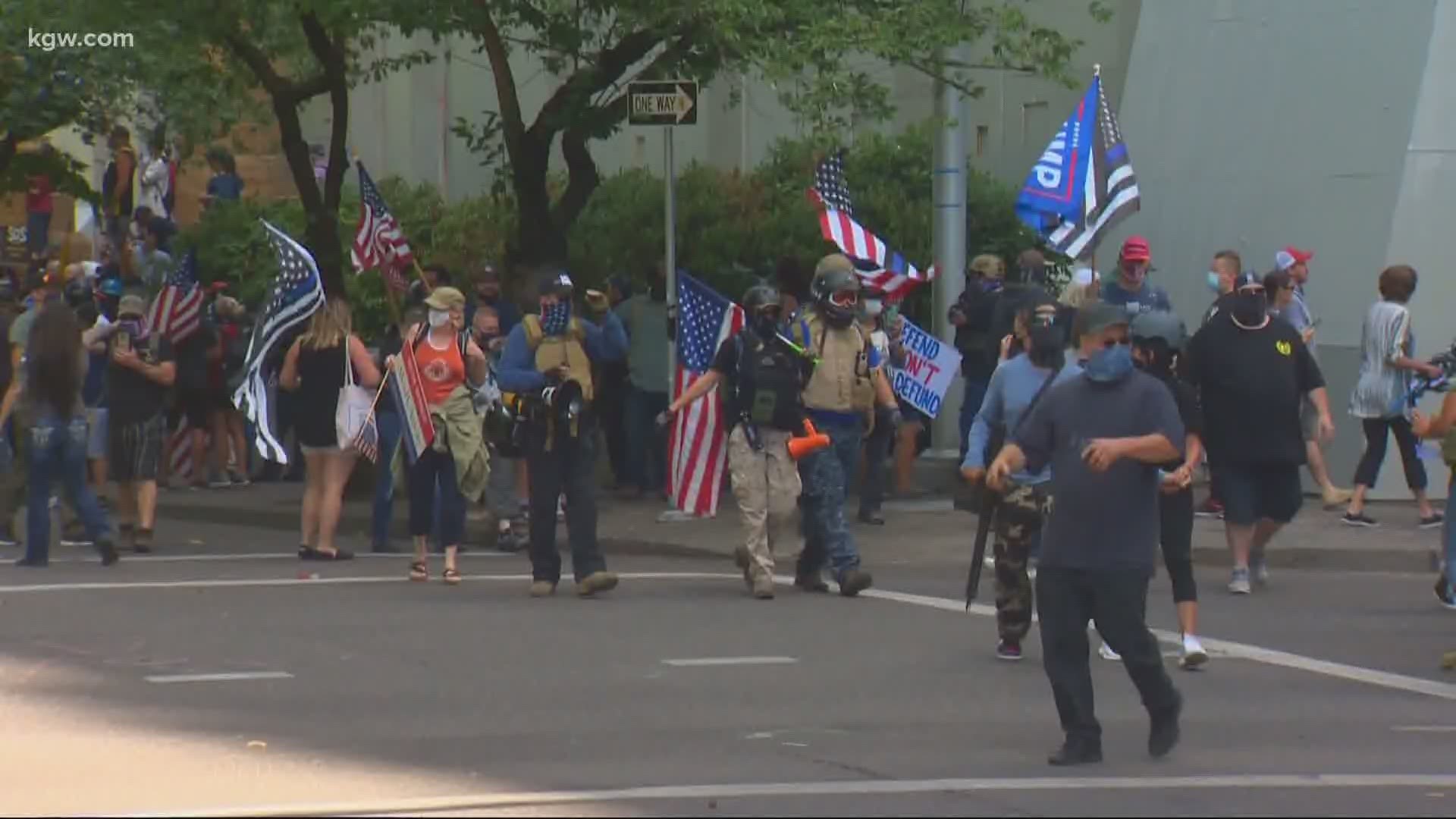 PORTLAND, Ore. — Portland Police made 14 arrests Saturday night, after officers declared a riot in Southeast Portland. They said some in the crowd were throwing rocks and other items at them. But police never declared a riot and made no arrests earlier in the day, when fights broke out and firearms were everywhere during dueling protests downtown.

Alt-Right and Proud Boy factions mixed it up with left-wing protesters. People were injured in various skirmishes in the streets near the Multnomah County Justice Center and Federal Courthouse. Many members of the right-wing side came armed with handguns and rifles. One frightening incident was caught on camera, of an alt-right member pointing a handgun at the opposing crowd, with his finger on the trigger. Police said they have identified the man and are investigating, but also looking for more witnesses.

The Portland Police Bureau also delivered a news release late Saturday that blamed a lack of resources for not responding. The release said because of ongoing nightly protests and other calls for service, only 30 officers were assigned crowd management Saturday afternoon. They also said the presence of firearms and of hostile crowds that had targeted police for weeks played into their decision not to intervene.

Juan Chavez, an attorney with the Oregon Justice Resource Center, disputed PPB’s assertion that resources held them back.

“Their belief is just if you stand against the out of state pro-police forces, you are the same person that goes out every night and yells at me too, so I’m not going to come out and help you,” said Chavez. “It’s shocking to me just how personal this is to them.”

Most police activity came after alt-right groups had left and the violence had ended. That’s when Federal officers declared an “unlawful assembly” and dispersed a crowd that had settled in Terry Shrunk Plaza, which is federal property.

Attempts by KGW to get added response and information from the Portland Police Bureau on Sunday were unsuccessful. Emails sent the offices of both Portland Mayor Ted Wheeler and Oregon Governor Kate Brown. Brown has not responded.

“I vehemently oppose what the Proud Boys and those associated with them stand for, and I will not tolerate hate speech and the damage it does in our city. White nationalists, particularly those coming to our city armed, threaten the safety of Portlanders, and are not welcome here. Regarding Saturday afternoon’s protest, I am closely reviewing and discussing with Chief Lovell Portland Police Bureau’s strategy to limit their intervention in the right-wing protests and counter-demonstrations. We will share more information with the public. We are at a critical place where police officers are needed to intervene in protests where police officers themselves are the flashpoint.”