The body found near a missing Springdale woman's vehicle has been confirmed as 82-year-old Ava Moore. 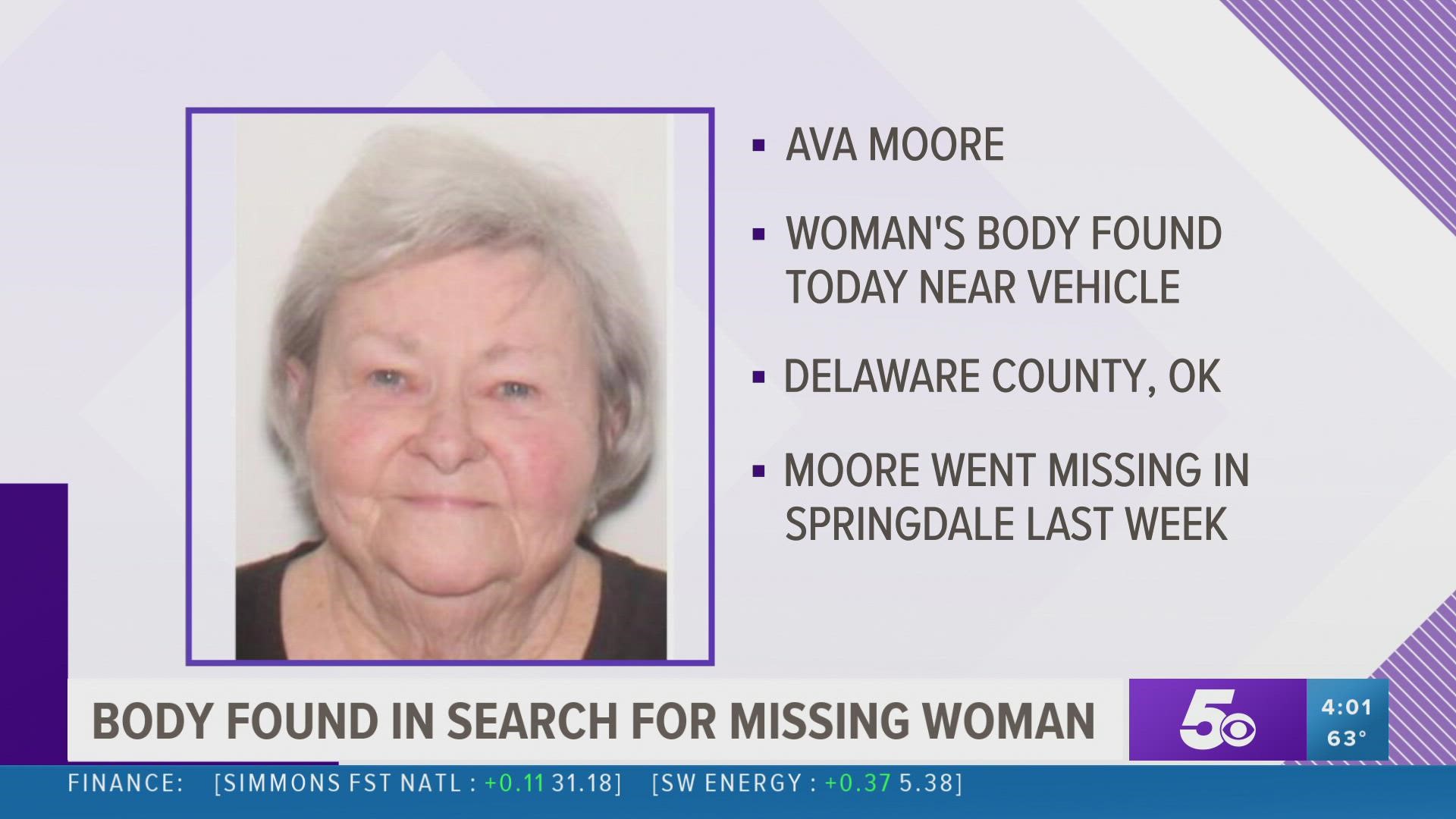 At around 11 a.m. Monday, Oct. 25, morning, detectives with the Springdale Police Department and agents with OSBI and Deputy's with the Delaware County Sheriff's Office in Oklahoma found Moore's body close to the area of her vehicle.

Officials say the cause and manner of her death are still being determined by the state medical examiner's office.

A Silver Alert was issued for 82-year-old Moore after she went missing out of Springdale on Thursday, Oct. 21.

The body will be sent to the Oklahoma State Medical Examiner's office for identification and cause of death.

Police say Moore had been missing from her home on Carly Road in Springdale and her vehicle, a 2011 gray Toyota Camry, was not located at her home.

Police say Moore is of sound health and mind. According to the family, it is peculiar for Moore to leave without notifying someone.

"We've been putting flyers out. We got friends and family, and people we don't even know looking and driving," said Lesa Delagardelle, Moore’s daughter.

They say she disappeared after leaving her Spring Meadows Apartment on Carly Road to head to a doctor's appointment. According to her family, Moore is diabetic and has not been taking her insulin. Because of this, they say she was not in the correct state of mind.

This story is similar to Jack Doyle's 74-year-old wife who was missing for two weeks before she was found dead.

"It's still a mystery till this day why she wasn't found since she was so close to where she went missing," Doyle said.

His wife was found a quarter of a mile from an assisted living facility where she was dropped off. Doyle says he wants to encourage everyone to take Silver Alerts seriously because two months ago he was living the same nightmare.

"If the person is not found in 72 hours then the likelihood that you could have a positive outcome diminishes tremendously," Doyle said.

Delagardelle says she and her family searched near the Oklahoma, Kansas border after getting a Facebook message saying Moore's purse was found on a dirt road there.

"I have no idea how it ended up here," Delagardelle said.