WASHINGTON (CBSNews) — Wearing pink, pointy-eared “pussyhats” to mock the new president, hundreds of thousands of women massed in the nation’s capital and... 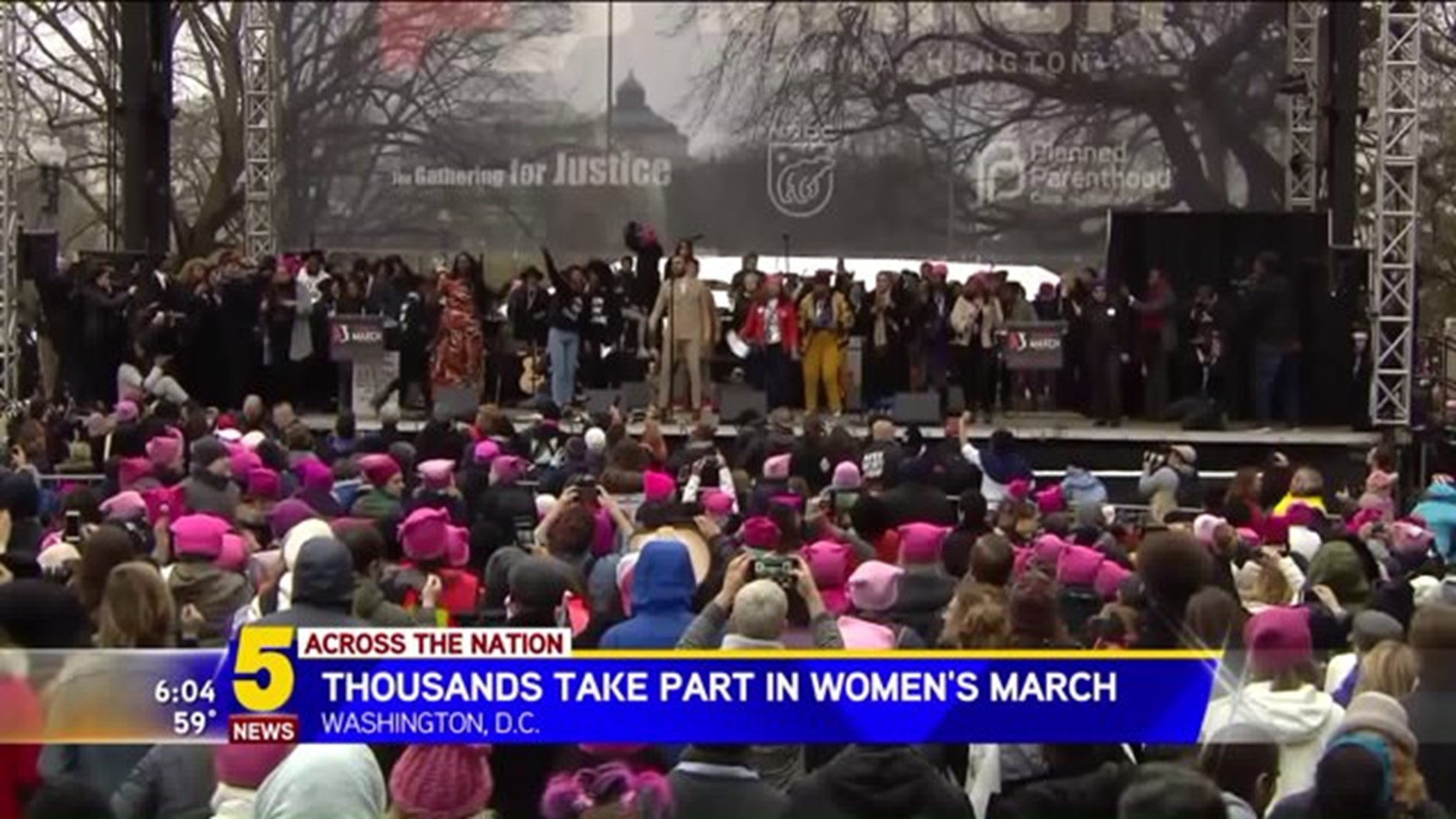 WASHINGTON (CBSNews) -- Wearing pink, pointy-eared “pussyhats” to mock the new president, hundreds of thousands of women massed in the nation’s capital and cities around the globe Saturday (Jan. 21) to send Donald Trump an emphatic message that they won’t let his agenda go unchallenged over the next four years.

“We march today for the moral core of this nation, against which our new president is waging a war,” actress America Ferrera told the Washington crowd. “Our dignity, our character, our rights have all been under attack and a platform of hate and division assumed power yesterday. But the president is not America. ... We are America and we are here to stay.”

The women brandished signs with messages such as “Women won’t back down” and “Less fear more love” and decried Mr. Trump’s stand on such issues as abortion, health care, diversity and climate change.

The message reverberated at demonstrations around the globe, from Paris and Berlin to Sydney and beyond.

There were early signs that the crowds in Washington could top those that gathered for Mr. Trump's inauguration on Friday (Jan 20).

City officials said organizers of the Women’s March on Washington had more than doubled their turnout estimate to 500,000 as crowds began swelling and subways into the city became clogged with participants.

Figures from transportation officials in Washington also suggested more people may be on the National Mall for the women’s march than came for the inauguration.

On Inauguration Day, 193,000 trips had been taken as of that time, and the rail system opened an hour earlier that day, at 4 a.m.

It wasn’t just a Washington phenomenon and it wasn’t just women: More than 600 “sister marches” were planned across the country and around the world, and plenty of men were part of the tableau, too. Organizers estimated 3 million would march worldwide.

As the rally alongside the National Mall took shape, Mr. Trump opened his first full day as president by attending a prayer service at the Washington National Cathedral, a tradition for the day after inauguration. He later got a view of the protesters from the window of his limo.

His motorcade was on its way back to the White House from the prayer service when he passed several prominent groups of protesters. As he crossed one intersection, cars started honking loudly. Some protesters held up signs that likened women’s rights to human rights. It was a nod to a famous speech that former Democratic presidential nominee Hillary Clinton gave in China as first lady.

Other signs read “We stand with Planned Parenthood.”

Two tweets posted on early Saturday (Jan. 21) afternoon from the @realDonaldTrump and @POTUS Twitter accounts said, “I am honored to serve you, the great American People, as your 45th President of the United States!” Neither of the tweets mentioned the march.

I am honored to serve you, the great American People, as your 45th President of the United States!

One the streets of Washington, feminist leader Gloria Steinem described the worldwide mobilization as “the upside of the downside: This is an outpouring of energy and democracy like I have never seen in my very long life.”

“Sometimes we must put our bodies where our beliefs are,” she told the Washington crowd, labeling Mr. Trump an “impossible president.”

Clinton, who lost to Mr. Trump, took to Twitter to thank the participants.

“Thanks for standing, speaking & marching for our values @womensmarch,” Clinton tweeted. “Important as ever. I truly believe we’re always Stronger Together.”

Thanks for standing, speaking & marching for our values @womensmarch. Important as ever. I truly believe we're always Stronger Together.

Retired teacher Linda Lastella, 69, who came to Washington from Metuchen, New Jersey, said she had never marched before but felt the need to speak out when “many nations are experiencing this same kind of pullback and hateful, hateful attitudes.”

“It just seemed like we needed to make a very firm stand of where we were,” she said.

Joy Rodriguez, of Miami, arrived with her husband, William, and their two daughters, ages 12 and 10. “I want to make sure their rights are not infringed on in these years coming up,” Joy Rodriguez said.

Rose Wurm, 64, a retired medical secretary from Bedford, Pennsylvania, boarded a Washington-bound bus in Hagerstown, Maryland, at 7 a.m. carrying two signs: one asking Mr. Trump to stop tweeting, and one asking him to fix, not trash, the Obamacare health law.

“There are parts of it that do need change. It’s something new, something unique that’s not going to be perfect right out of the gate,” she said.

District of Columbia Mayor Muriel Bowser said best thing the federal government led by Mr. Trump can do is “leave us alone.”

Bowser said she was speaking at the women’s march on behalf of all female elected officials, and that women are more harshly and unfairly criticized at every level of government.

Rallies were held elsewhere in the U.S. At one in Concord, New Hampshire, author Jodi Picoult said: “We in New Hampshire are not in the habit of going in reverse. We have the backs of those who are less fortunate - who may be struggling for health care, for environmental rights, for racial equality, for a fair wage, for justice.”

In Chicago, so many people turned out for a women’s march there that organizers canceled their plans to march through the city’s downtown. Instead, they planned to extend the ongoing rally on the city’s lakefront.

In Paris, thousands marched in the Eiffel Tower neighborhood in a joyful atmosphere, singing and carrying posters reading: “We have our eyes on you Mr. Trump” and “With our sisters in Washington.”

In Prague, hundreds gathered in Wenceslas Square in freezing weather, waving portraits of Mr. Trump and Russia’s Vladimir Putin and holding banners that read “This is just the beginning,” ‘’Kindness” and “Love.”

“We are worried about the way some politicians talk, especially during the American elections,” said organizer Johanna Nejedlova.

In Copenhagen, Denmark, march organizer Lesley-Ann Brown said: “Nationalist, racist and misogynistic trends are growing worldwide and threaten the most marginalized groups in our societies including women, people of color, immigrants, Muslims, the LGBT community and people with disabilities.”

In Sydney, thousands of Australians marched in solidarity in Hyde Park. One organizer said hatred, bigotry and racism are not only America’s problems.

In Berlin, hundreds of protesters in the German capital carried on signs as they rallied outside the U.S. Embassy in solidarity with the Women’s March in Washington.

“Mr. Trump, you are no Berliner,” signs said.

Other signs included slogans such as “No to sexism,” ‘’Women’s rights are human rights,” and “Our bodies, our minds, our power.”

One of the protesters is Katie Berdett, an American living in Berlin. She says she fears the loss of women’s rights under Mr. Trump and “for the democracy of our country.”

“But at the same time I’m hopeful because there are so many people standing up and rising up and taking part in these demonstrations,” she said.

President John F. Kennedy gave a famous speech in Berlin in 1963 when he said he considered himself “a Berliner” -- a remark that helped keep up morale in the Western part of the then-divided city.

The Women’s March on Washington was conceived in the late hours of election night, and it all began with a frustrated Facebook post by Hawaii grandmother Teresa Shook. “What if women marched on Washington around Inauguration Day en masse?” she wrote on her wall.

A few hours later, a Facebook event page was created. More and more began clicking the link. As it turns out, Shook was not the only disgruntled voter searching for a new cause.

Hundreds of groups quickly joined the cause, pushing a wide range of causes, including abortion rights, gun control, climate change and immigrant rights.

The website of the Women’s March on Washington describes it as “a grassroots effort comprised of dozens of independent coordinators at the state level.” Four national co-chairs helmed the effort and a national coordinating committee worked “around the clock” to pull it together, the website says.

March organizers said women are “hurting and scared” as the new president takes office and want a greater voice for women in political life.

“In the spirit of democracy and honoring the champions of human rights, dignity and justice who have come before us, we join in diversity to show our presence in numbers too great to ignore,” their mission statement says.

While the march organizers’ “mission and vision” statement never mentions Mr. Trump and stresses broad themes, including the message that “women’s rights are human rights,” the unifying factor among those turning out appeared to be a loathing for the new president and dismay that so much of the country voted for him.