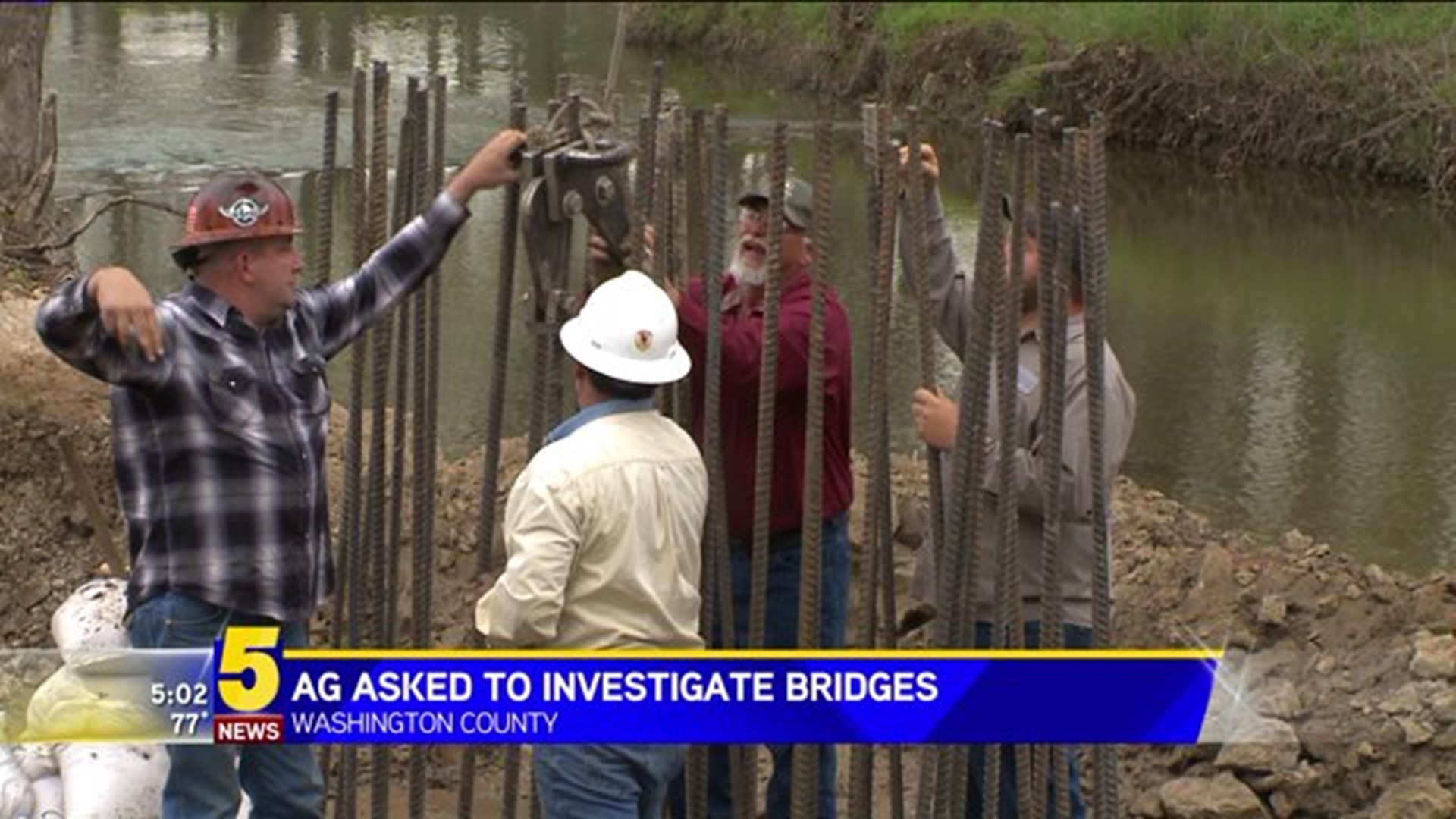 "I write to respectfully request that your office investigate the recently publicized issues with bridge construction in Washington County," Madison wrote. "Considering the nature of the issues and the allegations, I believe that your office is best suited and has the right resources, experience and expertise to investigate these issues, which are of great interest to the taxpayers and citizens of Washington County."

The letter goes on to detail how Washington County is a defendant in a whistleblower lawsuit filed by an employee of the county's road department. The person who filed the lawsuit was identified as George Braswell, and he alleges that two bridges are structurally deficient due to not being built according to engineering plans, the letter states.

Braswell complained to his superiors at the road department and informed the Washington County Quorum Court at a meeting on March 30 that his complaints were made as early as October 2013, according to the letter. Braswell then said his concerns were ignored, and he made allegations of "retaliatory harassment" in response to his complaints, the letter states.

"What is concerning from the public’s perspective is that, despite disputes of fact concerning when Mr. Braswell first complained, there is no question he made his concerns known to numerous county officials in November 2014. In response, the county judge, who oversees the road department, assured the quorum court and the public that the bridges were safe," Madison wrote in her letter.

Madison continued, "Obviously, there are critical public safety issues with the bridges that the county must investigate locally, on its own, with the assistance of engineers and other professionals, but in my view, we need an outside investigation into the public trust issues and the misspending of taxpayer dollars."

Several members of the quorom court were at Stonewall Bridge near Prairie Grove today (April 2) to oversee the progress being made. Madison said crews were installing new rebar to reinforce the center supports. She said she still has questions about the project.

"We didn't get to see the demolition of the actual center supports, and all of that has been done and taken away, and wasn't documented to the best of my knowledge, so I'm curious about what was done there, and we need to make sure that going forward there's still a lot of bridge left to build, and we need to make sure that that is being done to plan, so this is just one step in the process," Madison said.

Madison said she is also concerned about the burden on the taxpayers.

"It's very frustrating that we're having to rebuild part of a bridge that taxpayers have built to construct, it wasn't built to engineering plans, the overlap in the rebar wasn't done properly for the center supports, so that's why we're here today, having to redo work that was already done and paid for," Madison said.

The other bridge the quorom court has raised concerns over is the Harvey Dowell Bridge between Elkins and Fayetteville. The bridge is still open to the public, but has been reduced to a weight limit of 3 tons.

Washington County prosecutor Matt Durrett has also been asked to investigate whether or not any crimes took place when the faulty bridges were constructed.