WASHINGTON COUNTY (KFSM) — Washington County Justice of the Peace Rick Cochran resigned Wednesday (Jan. 25). Cochran was the JP for District 7. In a state... 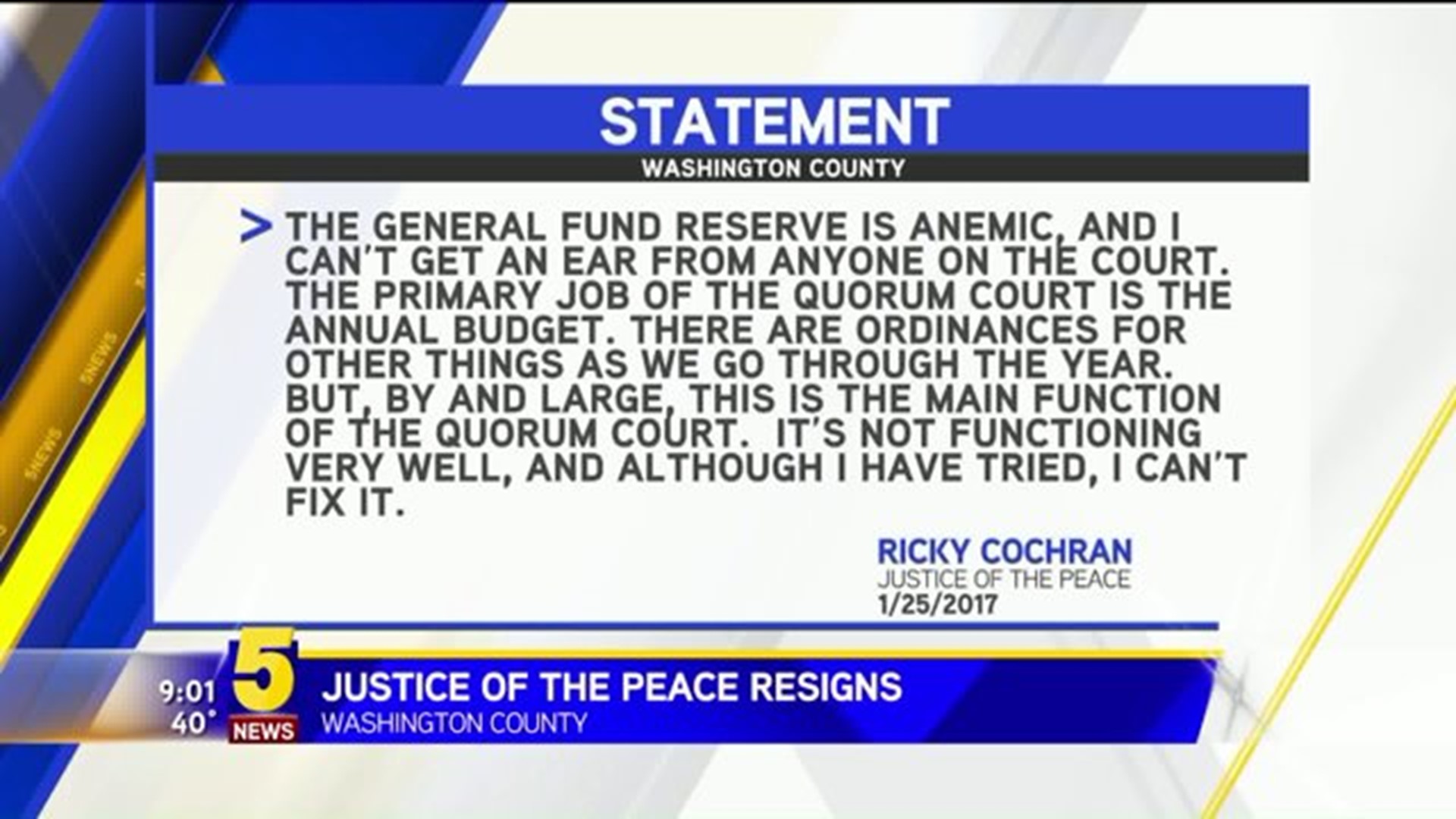 Cochran was the JP for District 7.

In a statement, Cochran writes his resignation has to do with what he feels is a lack of response to county budget concerns:

The primary reason for leaving the Quorum Court is surrounded by the lack of JP’s recognizing the need to reinforce our dwindling reserves for the General Fund.

Five years ago we (including myself) voted to reduce the general fund millage by half a mil because we had a $19 million reserve. Over the years the reserve has dwindled down to just over $6 million. Two budget cycles back, I had proposed a minimum range of $8 to $10 million. Nothing was passed that would achieve that amount. This past budget cycle I brought information to the Quorum Court showing the direction the reserves are headed if we do nothing, or raise a little, or raise even more. Doing nothing to rebuild the reserves will result in a financial train wreck for the county.

During the 2017 budget process I warned several times of our reducing reserves going forward over the next few years. I reminded the JPs of the unbudgeted $1 million we had to pay in 2015 for the Act 663 taxes that were not remitted. I reminded them of the $800,000 we had to chip in for the health plan in 2016, [which was] also not in the budget. I forecast that we would always have these types of off-budget surprises and needed to work on the balance of revenue and spending. During the budget cycle of 2016 I was the only JP to propose any budget cuts. Some passed, some didn’t. I was the only JP to vote to increase millage by half a mil. That would have helped offset the dwindling reserve. During the 2016 budget cycle I proposed the same half a mil increase and there were six votes for it then (eight needed to pass). Why the change of heart on those member of the court?  I cannot say.

In the very first meeting of the Quorum Court this year, we needed to pass an ordinance to add $982,000 to the Assessors budget. The surprise came early this year. This dropped our reserve to $5.28 million. I can only hope that there are no more surprises for 2017.

Roger Haney said a $15 million reserve is his advice prior to leaving his duties in the county a few years ago. The General Fund reserve is anemic, and I can’t get an ear from anyone on the court. The primary job of the Quorum Court is the annual budget. There are ordinances for other things as we go through the year. But, by and large, this is the main function of the Quorum Court. It’s not functioning very well, and although I have tried, I can’t fix it.

The Quorum Court will declare a vacancy for his position and Gov. Asa Hutchinson will appoint someone to finish out Cochran's term.