FAYETTEVILLE (KFSM) — As many as 12 veteran deaths may have been because of the actions of a doctor who was dismissed from working with the Veterans Health Care... 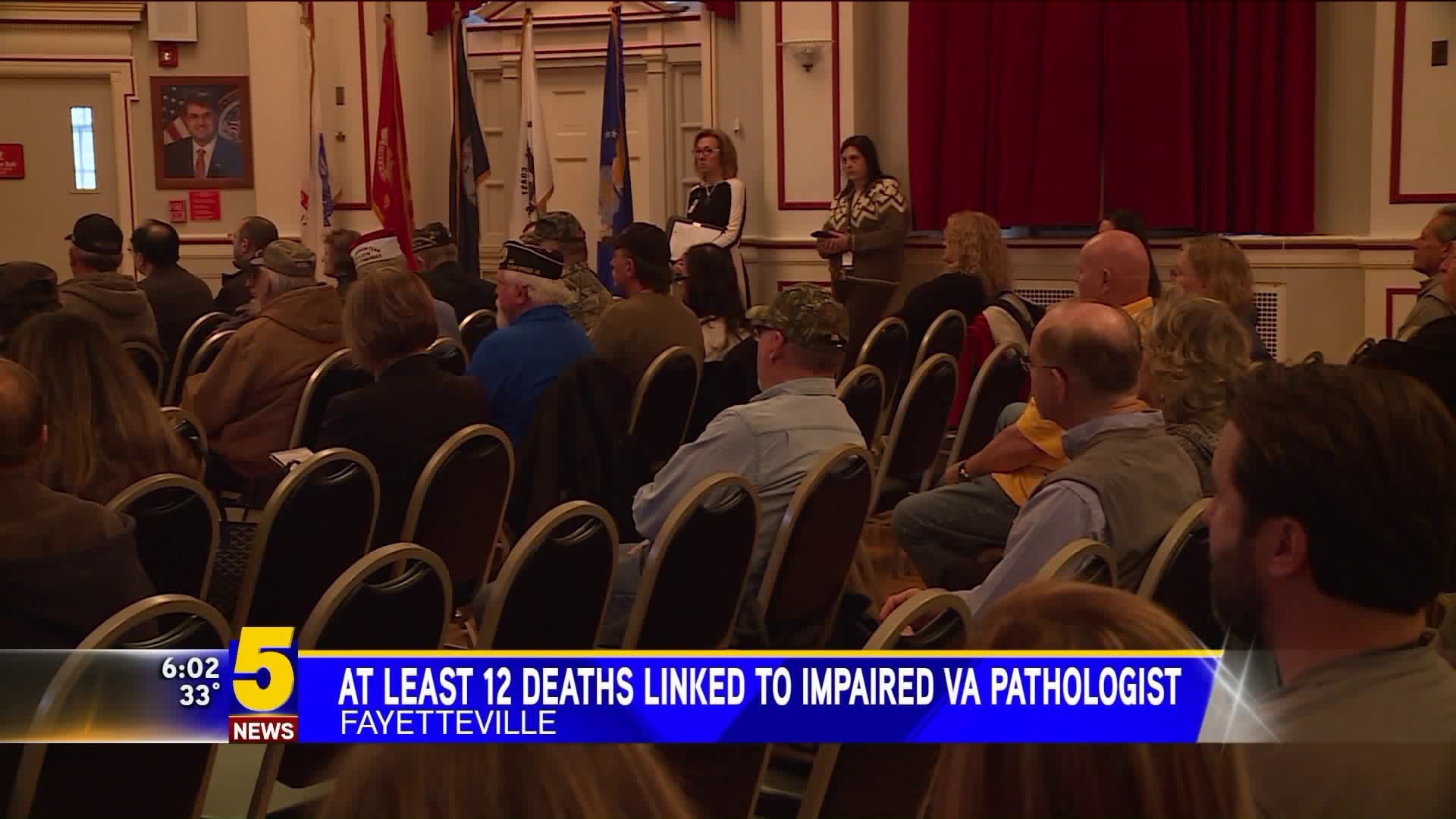 FAYETTEVILLE (KFSM) — As many as 12 veteran deaths may have been because of the actions of a doctor who was dismissed from working with the Veterans Health Care System of the Ozarks, the Veterans Affairs Medical Center personnel reported Monday.

The findings, which were released at a town hall meeting Monday morning (Jan. 28), are the result of a study that has seen 33,902 cases reviewed, with only 76 cases left to be considered.

The reviews showed 3,007 of the 33,902 cases showed an error or misdiagnosis, or 8.8 percent of cases. The reviewed showed 27,307 cases were found to be correct or acceptable so that no change was needed to their final reports. They also examined 3,512 where no examination was required, but the cases had to be reviewed because the doctor had contact with the cases.

Medical Director Dr. Kelvin Parks said Dr. Levy worked as a contractor for the hospital before he was a VA employee. So, those cases have to be reviewed too.

“In the spirit of transparency to a total external review we wanted to add those 96 cases to make sure the public and our veterans were aware of the increase,” Parks said.

Of all the cases reviewed so far less than nine percent of those have shown errors or misdiagnosis.

The errors resulted in 22 institutional disclosures, with 21 of those having been completed.

The reviews center around a doctor who was found to be "impaired" during his work with the VHSO and the Veterans Affairs Medical Center in Fayetteville.

VA officials believe the veterans' deaths could possibly be a result of the diagnosis by Dr. Robert Morris Levy, a former VA pathologist found to be impaired in March 2016. He was immediately removed from clinical care.

The Associated Press reported Levy was fired April because of a DUI which was ultimately dismissed. Levy denied being impaired while on duty.

VA officials said Monday that if Levy is charged with a crime, the charges will come from a federal prosecutor. There is no timeline as to if or when charges might be brought.

Jamie Jackson lost her veteran husband to cancer in 2013. She received a letter that her husband had five compromised biopsies linked to this investigation, but she hasn’t heard anything about her husband’s case since then. Jackson is worried Dr. Levy will not see criminal charges.

“He’s still not even been arrested. I’m wondering if he is practicing somewhere. Did he get his license taken away? Is he treating other people and is anyone overseeing to make sure the man isn’t impaired again? I definitely wonder that,“ she said.

Following his firing, officials with the VA Medical Center in Fayetteville and the U.S. Department of Veterans Affairs announced an investigation in more than 33,000 of Levy’s cases, which affect about 20,000 veterans. Most of the reviews have been completed, but 76 cases remain.

Previously, the VA noted that only four veterans may have died from being misdiagnosed by the doctor. Those numbers were disclosed Dec. 18 and gave the number of errors found at 2,438. They have completed 4,483 external reviews since that update.

Officials had hoped to have their reviews completed by the end of 2018, but they needed an extra month or so to finish the reviews.