FAYETTEVILLE, Ark. (KFSM) — On Wednesday (Feb. 6) the student hit and killed in a University of Arkansas crosswalk was identified as 18-year-old Andrea Torres. ... 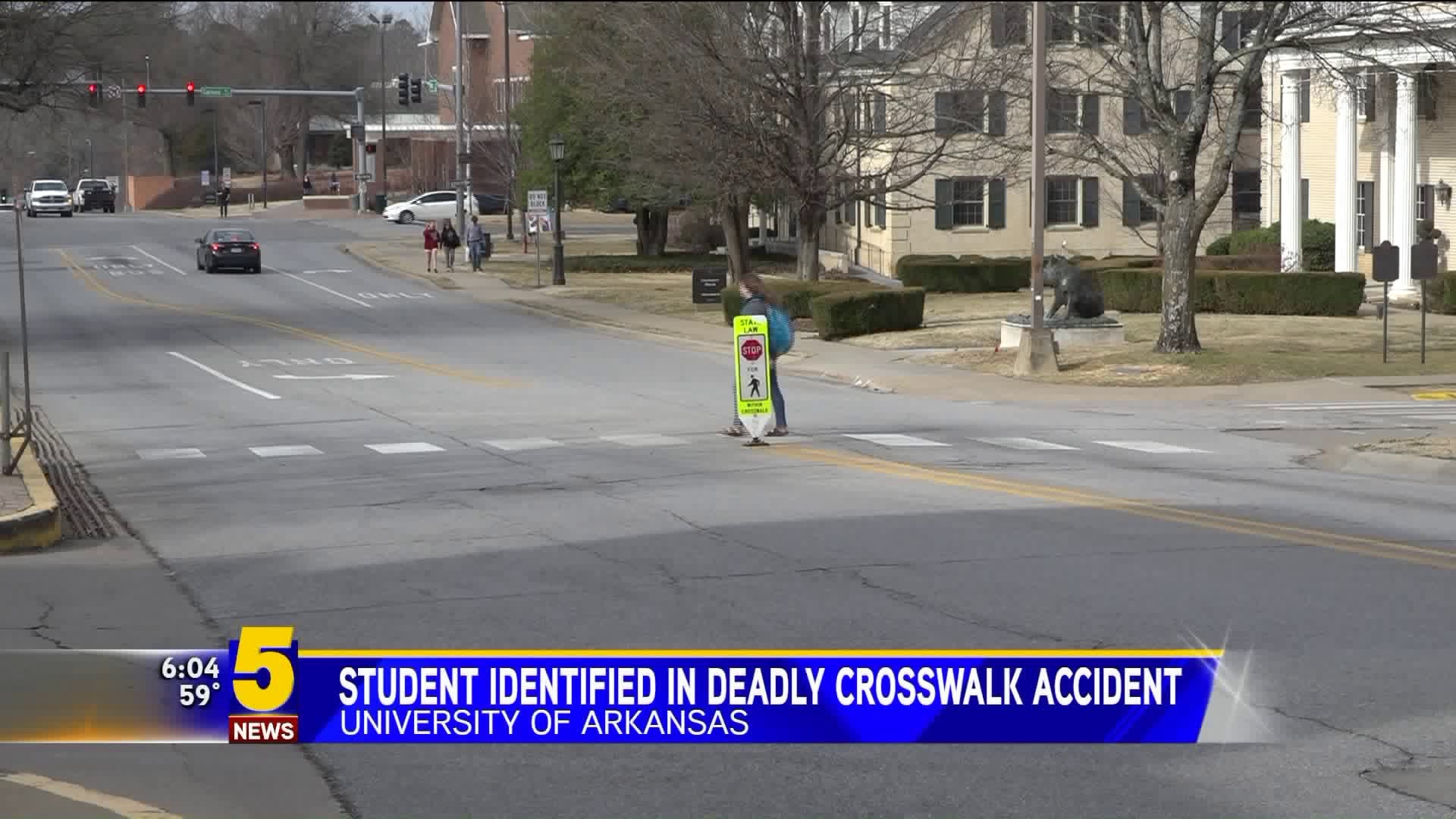 FAYETTEVILLE, Ark. (KFSM) — On Wednesday (Feb. 6) the student hit and killed in a University of Arkansas crosswalk was identified as 18-year-old Andrea Torres.

Torres, a UA student,  was struck Saturday (Feb. 2) by a 17-year-old girl driving on Garland Avenue near the Northwest Quad residence hall, according to Capt. Gary Crain, spokesman for UA police.

A 17-year-old driver was issued two citations in the incident; failure to yield to a pedestrian and using a handheld device while driving.

The case has been turned over to the Washington County prosecutor who will determine if further charges will be filed.

Crain told 5NEWS the area where Torres was hit is not a school zone.

The incident has those on campus immediately reacting to the tragedy.

"We were saddened to learn of Andrea Torres' passing and our hearts go out to her friends and family during this time," Chancellor Joe Steinmetz said.

"We are grateful she was a part of our community. She will be remembered."

Torres was a freshman who was discovering her passion for architecture.

"Andrea was a promising student in architecture and design, just at the beginning of her education, but possessing a vibrant spirit and strong anticipation of the opportunity to make the world a better place," said Peter MacKeith, dean of the Fay Jones School of Architecture and Design.

"We send her family our condolences and our hope for peace amidst this tragedy."

According to UA officials, funeral arrangements are pending. For those wishing to help the family with funeral expenses, more information can be found here.

"We're taking every step possible to make sure this is something we bring to light, talk about things that are difficult - so our community can have better access to grieve and access to prevent these incidents," said U of A Student Union Director of Student Safety Maria Calderon.

As part of a safety week, students are turning the conversation into addressing crosswalk safety specifically.

Calderon, along with other students and the U of A administration will use safety week to talk and educate students about crosswalk safety.

Calderon listed some topics that will likely be a part of the debated.

"Maybe entertaining the idea of writing some legislation through our Senate of adding more speed bumps at the crosswalks. That could help the drivers. Maybe putting up some signs at the associated student government pace board through student fees, talking about, 'Hey look up from your phone'. We do want to make it clear that this is something for both sides and there is accountability for people," Calderon said.

Outside of the U of A Campus, the conversation continues with advocates for distracted driving like Fort Smith lawyer Joey McCutchen, speaking out on the issue.

McCutchen said 16 states in the U.S. have passed hands-free legislation where it's a violation of the law if you holding a phone in a vehicle. Arkansas is not one of those states but McCutchen said Arkansas lawmakers are looking into it.

"There are certain legislators who are considering filing handsfree legislation in our state," he said. "The legislator would decide what the penalty is while driving and being distracted with your hands on the device. That is something that our legislators could put teeth in the law if they want to."

"We have had a distracted driving education program. There is over 3,400 people a year who are killed by distracted driving. What we are trying to do is educate youngsters so they can then educate their family members or other people who are driving them around. What we have done is a poster contest where the students have drawn posters to be placed on billboards to be placed around the community," McCutchen said. "It will educate folks on what distracted driving looks like.