LITTLE ROCK, Ark. (KTHV) — For the very first time, a group of local girls will join the group formerly known as the Boy Scouts on Tuesday, Feb. 5. Troop 19 wil... 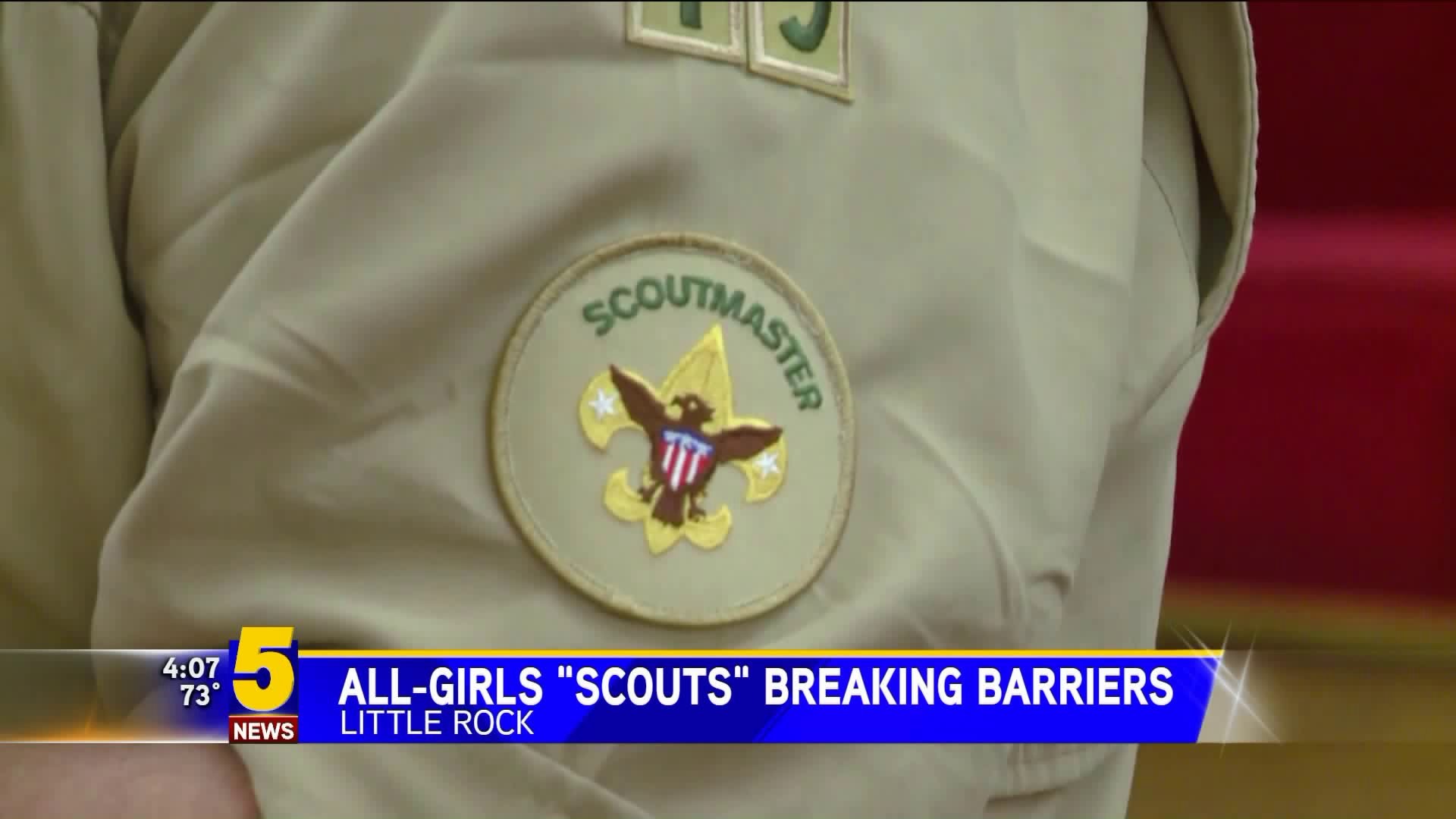 LITTLE ROCK, Ark. (KTHV) — For the very first time, a group of local girls will join the group formerly known as the Boy Scouts on Tuesday, Feb. 5.

Troop 19 will receive its charter during a special ceremony and become the first all-girls troop in central Arkansas.

Girls have only been allowed into Scouts BSA since Friday, Feb. 1 and five of the members of Troop 19 said Monday night, Feb. 4 that they are ready for what they are about to do and become.

“I’m looking forward to learning skills that we will later on use in life,” Mackenzie McEuen, 13, said, “doing different things such as building, maybe. Outside, learning how to make a fire, and just things that we’d need to if we need to survive.”

Megan Mills, 16, said she is looking forward to, “making new friends and learning new things.” Her twin sister, Bailey, said she is ready for, “the adventures that we will go on together.”

Mary Nabors, at 17 the oldest in the troop, explained that she joined for, “new experiences and getting out and learning new things that could help in the future.”

Emily McEuen, the youngest at 11 years of age, said she wants the family atmosphere scouting can provide. “Well, I’m actually looking forward to actually spending time together,” she stated. “What I feel like is, I don’t feel like we get enough time with each other. But, in Scouts, we actually get to do these fun activities and hang out with each other.”

Emily and Mackenzie are the inspiration for Troop 19. Emily joined a Cub Scouts pack last year when girls were first allowed to do so and shadowed the local Boy Scouts troop on some of their excursions. The girls’ father, Tim, went with her and said she learned a lot and enjoyed it immensely.

“The experience we had was just phenomenal,” he called. “It was just so much fun to be with my child, to experience what we’re experiencing.”

He contacted the Quapaw Area Council), the organizing body for Scouts BSA for the majority of the state, and volunteered to become scoutmaster for the new, all-girls troop.

“It’s an honor, to be honest with you,” he said. “I’m very, just honored to have this position as a scoutmaster.

“Learning about finances, scientific aspects. Yes, camping and taking hikes. That’s just a very small part of it. The biggest thing is having these young ladies to learn leadership skills, getting the opportunity to just advance themselves in our society by taking what they learn here and putting it forth in life.”

They will also learn what it means to be trailblazers. Tim McEuen spoke with them Monday evening about their opportunity to make history, which is something the girls say they have embraced.

“Yes,” Mackenzie McEuen said, “because we are going to be not only making history but coming together as one and exceeding through everything together.”

“There are not actually many scout programs that actually allow girls (in),” Emily McEuen acknowledged. “But, when we created Troop 19, this is actually letting girls come in and actually have fun, and they can actually do what the boys can do. Like, because sometimes, people say, like, women can’t do the same things as men. So, I believe we’re making history at Troop 19.”

Nabors said the girls want to send a message to anyone who believes girls do not belong in the scouts. “I think they should let the girls try new experiences,” she said, “and get out and try different things that most girls wouldn’t be able to do.”

Nabors said she wants to have a career as a pediatric nurse and believes scouting can teach her skills that will help her down the road. “A lot of, like, stuff that we can do for first aid,” she explained. “And then, if we’re out somewhere and there’s nothing that can really help us, like a hospital or something nearby, we can try our best to take care of what need is needing to be done.”

“What I’ve been wanting to become,” Emily McEuen added, “is, I want to become a nurse or an animator. I’m still choosing. Since I’m only 11, I have a ways to go.”

Tim McEuen said he is excited about the opportunity to expose the girls to the world of options ahead of them. He mentioned that he regrets now not having been a Boy Scout and acknowledged feeling a bit of pressure leading the first all-girl troop in the state.

He said any girl between the ages of 11 to 17 is welcome to join. They can either contact the Quapaw Area Council or show up at one of the weekly meetings held Tuesday nights at 6:30 p.m. at First United Methodist Church in Bryant.

“I guarantee you, you will take something home with you that night and say, wow, I want to go back and try next week, to see what else I can learn then.”