SPRINGDALE, Ark. (KFSM) — A Texas craft beer company has drawn complaints from Pacific Islanders after naming one of its beers “Bikini Atoll,” the c... 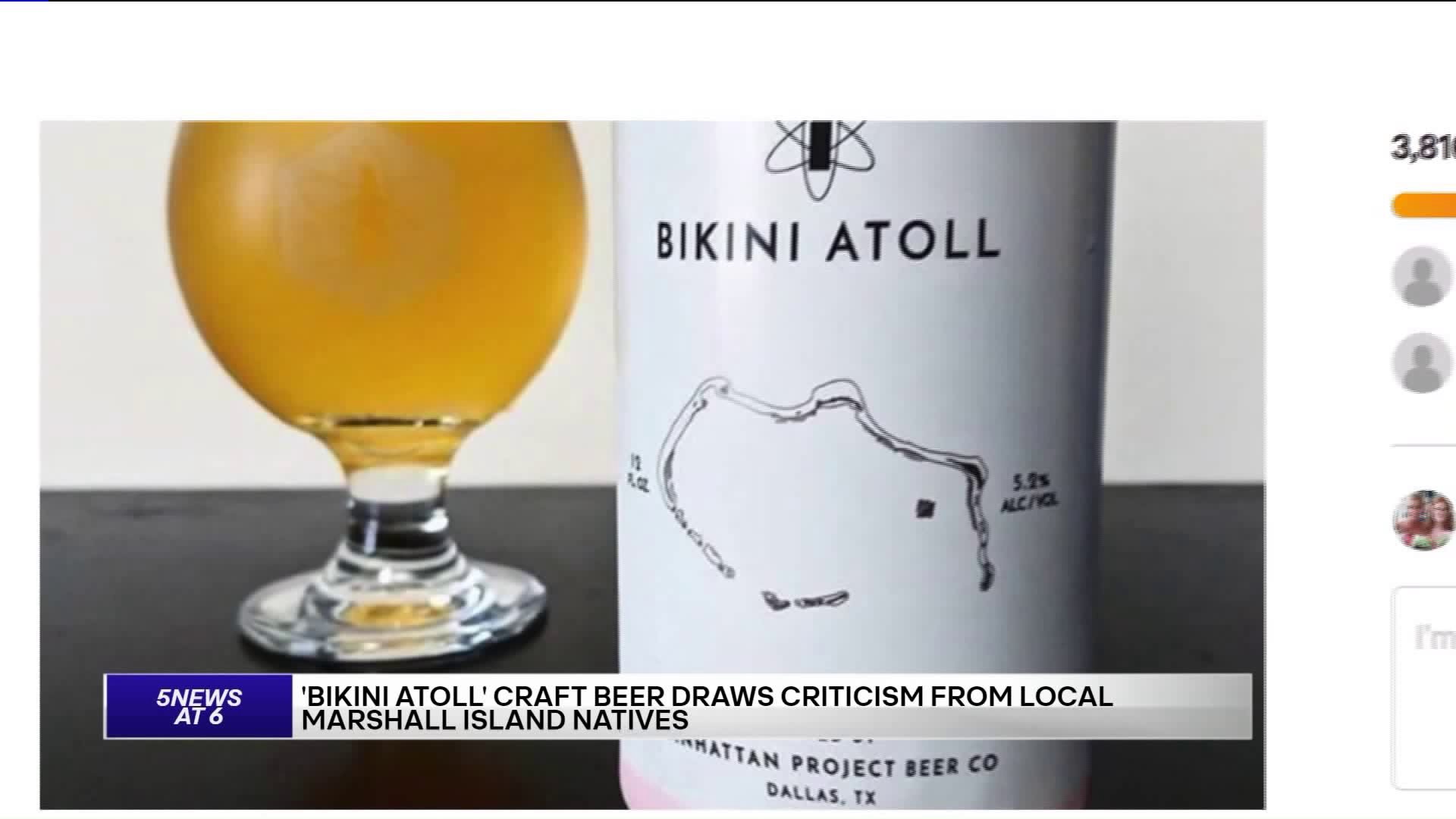 SPRINGDALE, Ark. (KFSM) — A Texas craft beer company has drawn complaints from Pacific Islanders after naming one of its beers "Bikini Atoll," the chain of islands used for nuclear detonation tests by the U.S. government in the 1950s.

According to USA Today, Manhattan Project Beer Company said the beer's name wasn't "created to mock or trivialize the nuclear testing that took place in the Marshall Islands."

USA Today also reported that Jack Niedenthal, the Health and Human Services Secretary for the Republic of the Marshall Islands, condemned the beer's name in a letter to the company's co-founder.

“The bottom line is your product makes fun of a horrific situation here in the Marshall Islands – a situation, that I promise you is still ongoing – to make money for your company. This is unacceptable to us,” Niedenthal wrote.

A Change.org petition — with 2,600 signatures as of Thursday (Aug. 15) — urges Whole Foods to stop selling the beer.

The petition states, in part:

We want to help the Manhattan Project Beer Company sell more beer.  As Pacific Islanders, we love beer.  Nothing goes better with island bbq than beer.

But it is bad form for a company called the Manhattan Project Beer Company to sell a product named after Bikini Atoll.  Nuclear testing is not something to joke about for Pacific Islanders.  The United States, France, and the United Kingdom have used our islands – and our families – as test subjects.  Nuclear testing only stopped in 1996 – the same year I graduated from high school.  While the Marshall Islands, Kiribati, and French Polynesia will forever live under the cloud of a nuclear legacy, military colonialism continues unabated in places like the Northern Mariana Islands and Guam.

Between 1946 and 1958, the United States detonated 67 atmospheric nuclear bomb tests on the northern Marshalls, including the Mike Shot, the first thermonuclear bomb test, on Enewetak Atoll, according to the Central Arkansas Library System's Encylopedia of Arkansas.

Islanders living in test areas had been relocated, while communities downwind from other tests were exposed to deadly radioactive ash.

After nuclear testing made much of the Marshall Islands unlivable, a treaty in the 1980s allowed Marshall Islanders to travel and work in the U.S. without having a visa.

Many settled in Springdale because of opportunities with Tyson Foods. Today about 15,000 live in the region — the second-largest concentration of Marshallese in the U.S.

Since the 1980s, when the Marshall Islands became a sovereign state with the U.S. under the Compact of Free Association (COFA) in 1986, thousands of Marshallese have legally migrated to North America.

“To me and a lot of other Marshallese, it’s exploitation colonialism,” Benetick Maddison said.

Benetick Maddison is of Bikinian decent and says Manhattan Project Beer Company’s Bikini Atoll beer is nothing new but very disappointing. He says the company says they are trying to raise awareness but says there is nothing on their website to support that. And says even decades later, many in the Marshall Islands are still having health consequences from nuclear testing.

“Many of our people are dying from cancer,” Benetick said.

“Having a company using our name for their own gain and benefit, I think it’s really, it shouldn’t be used in that way,” Sosylina said.

Kassalee Lejjena agrees and thinks the company should change its name

“They’ve been making profits off a tragedy that happened to us not even 100 years ago. We don’t support it but they are putting it off to people and their customers that we do,” Lejjena said.