BENTONVILLE (KFSM) — A semi caught fire in Bentonville at the Bella Vista border, then caught fire again, prompting the closure of Interstate 49 southbound for ... 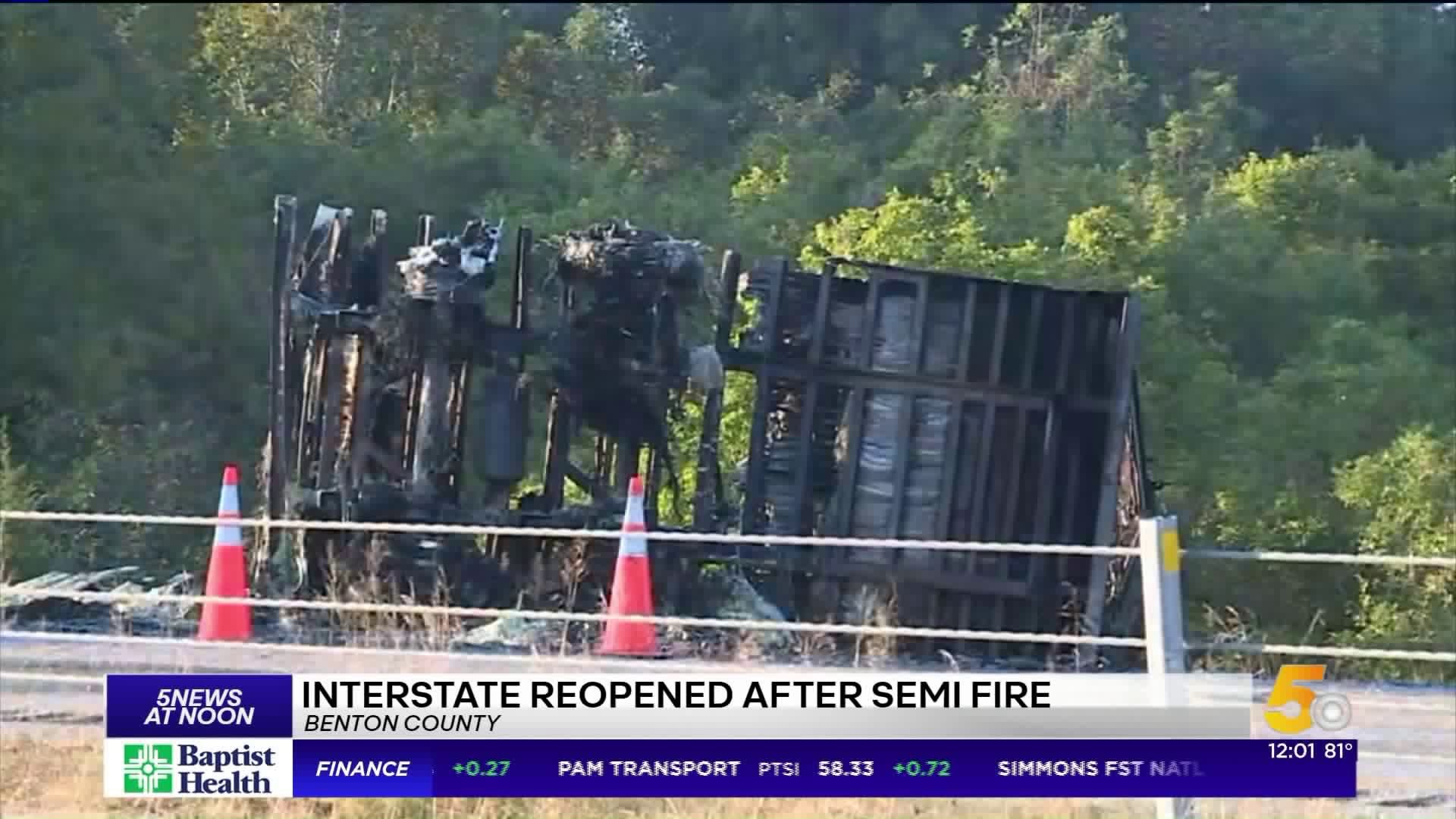 BENTONVILLE (KFSM) — A semi caught fire in Bentonville at the Bella Vista border, then caught fire again, prompting the closure of Interstate 49 southbound for several hours.

The Arkansas State Police reopened one lane to traffic at 7 a.m. after the interstate closed around 1:30 a.m. for a vehicle fire.

According to Arkansas State Police dispatch, a semi caught fire in the southbound lanes of U.S. 71/Interstate 49 at Exit 93 near the Bentonville/Bella Vista border.

The semi was carrying about 48,000 pounds of cake mix, according to personnel on the scene.

The closure caused State Police to divert traffic down U.S. 71 Business into Bentonville while firefighters worked to extinguish the burning semi and prepare to move the wreckage.

But as they started to move the truck about 6:45 a.m., part of it caught fire again, State Police said. That kept State Police from reopening the interstate by their original estimated time.

James Larson with P&J Towing Company was on the scene by 1:50 a.m. He said they arrived shortly after the trailer caught fire the first time. He said the driver had escaped the truck by then and was OK.

Larson said the apparent cause of the fire was an issue with the brakes, which he said weren't locked properly, and instead were partially closed.

"It kept just getting hotter and hotter, and they finally caught on fire, and then they caught the tires on fire," Larson said.

He said the driver finally noticed the brakes and tires on fire, bailed out, unhooked the cab and managed to get it away from the trailer, which burned to the ground after the cake mix ignited.

Larson said they had hauled away two dump truck loads of burned cake mix and four pieces of the trailer wreckage.

As Larson and his crew continued cleaning, the trailer caught fire again.

"After we started moving it around, we got some oxygen to it," he explained.

The Bentonville Fire Department managed to put out the fire again, and the cleanup continued. Larson said they spent hours shoveling cake mix off the interstate.  He said it was one of the most interesting — and slickest — cases he's ever worked.

"There's apparently grease in the cake mix, and when it got hot and water it it, [it was] just like walking on ice," Larson said. "We were slipping and sliding, even four wheel drives wouldn't work."

State Police reopened one lane of Interstate 49 at 7 a.m. The entire interstate didn't reopen until about 10:20 a.m., nearly nine hours after the semi caught fire.