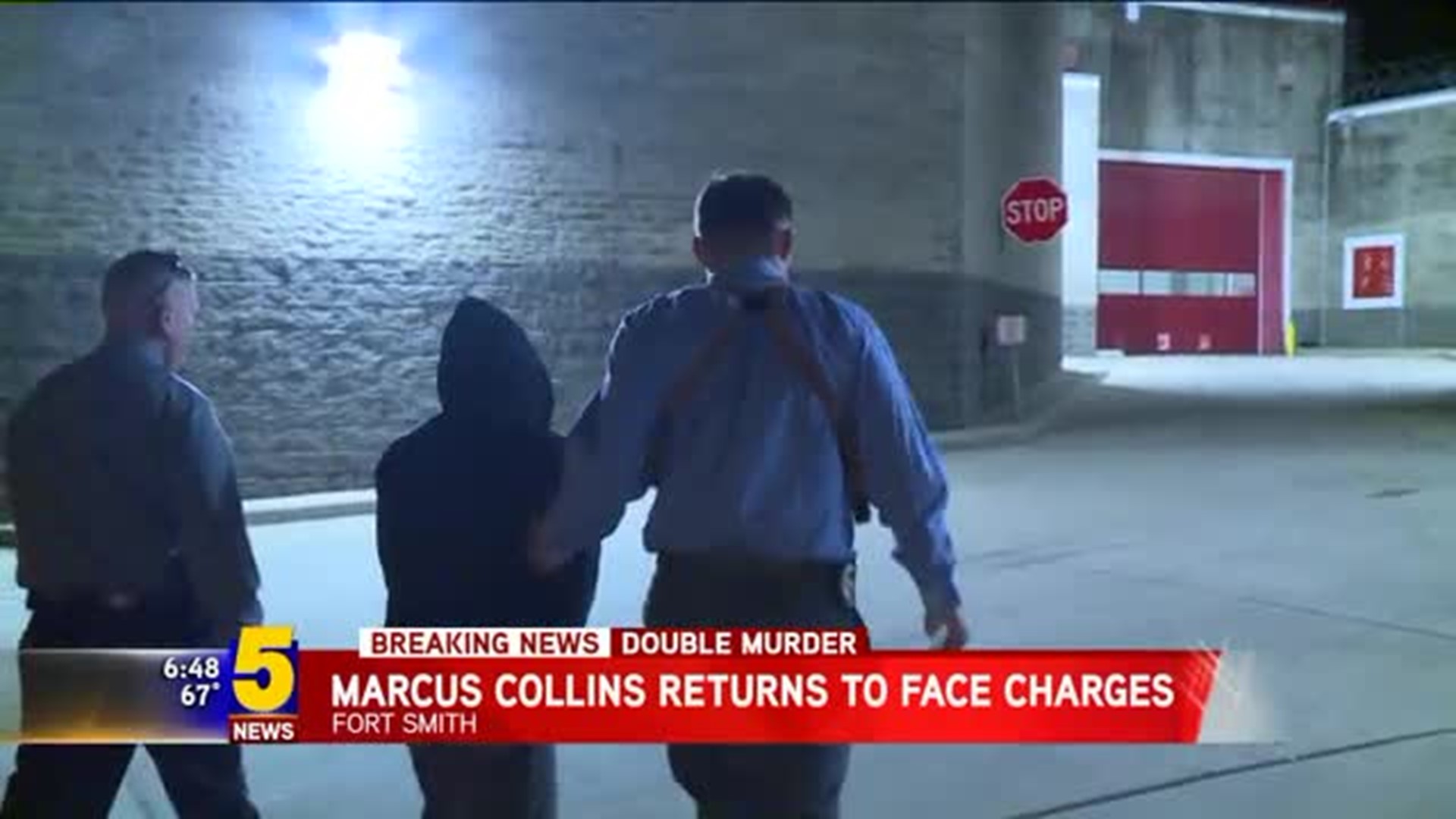 FORT SMITH (KFSM) — A man accused of murdering a Fort Smith couple is back in Arkansas on Wednesday (Sept. 12).

U.S. Marshals captured Marcus Collins, 29, earlier this week in Memphis. He had been on the run since July, prompting a nationwide manhunt.

Collins was brought back to Fort Smith late Tuesday night (Sept. 11) after being held in the Shelby County Detention Center in Memphis.

Collins is wanted on charges of first-degree murder in the shooting deaths of Brionna Belcher, 26, and Jonathan Harris, 43. Their bodies were found inside their apartment on July 26.

Collins spoke with a 5NEWS reporter outside the Sebastian County Detention Center upon his arrival.

"I'm innoncent, I'm innocent," he said. "Y'all know I ain't even built like that." When asked why he thought the police named him as a suspect, he said it was because, "I'm from Memphis. I'm from out of town. I'm the only person they can say."

"I ain't never been no murder [sic]," Collins said. "Go check my background."

Cpl. Anthony Rice of the Fort Smith Police said there is a sense of relief that Collins is back in Arkansas and in custody.

"This is a very long, lengthy and very extensive case for these detectives involved," Rice said. "Some of the comments were that they were glad that they were able to bring some justice for this family."

Collins was being held in the Sebastian County Detention Center on Wednesday on charges of first-degree murder, theft by receiving (firearm), aggravated residential burglary and kidnapping. He had a total bond of $605,000.

The father of Brionna Belcher, Curtis Belcher, spoke with 5NEWS on Tuesday about Collins' arrest and said the two used to date. He said he was shocked his daughter's ex-boyfriend was capable of murder.

"He seemed like he was in a happy place, but you never know what's in somebody's mind or what can trigger a person or what made them do what they do," Curtis Belcher said.

He said he misses his daughter, who he said was always happy.

"Bri was the biggest life of the party. Her smile would light up a whole day. I mean it was never a cloudy day when Bri was around," he said.

Curtis Belcher now says he just wants to know why the two suspects killed his daughter to gain some closure for his family.

Neirod Medlock, the other suspect in the case, was arrested on August 16 on first-degree murder charges.