Springdale Man Arrested After Shooting At Multiple Officers During Pursuit

SPRINGDALE (KFSM) — Video captured by a bystander shows the moments when a gunman opened fire on a Washington County deputy who tried to stop him near Tontitown... 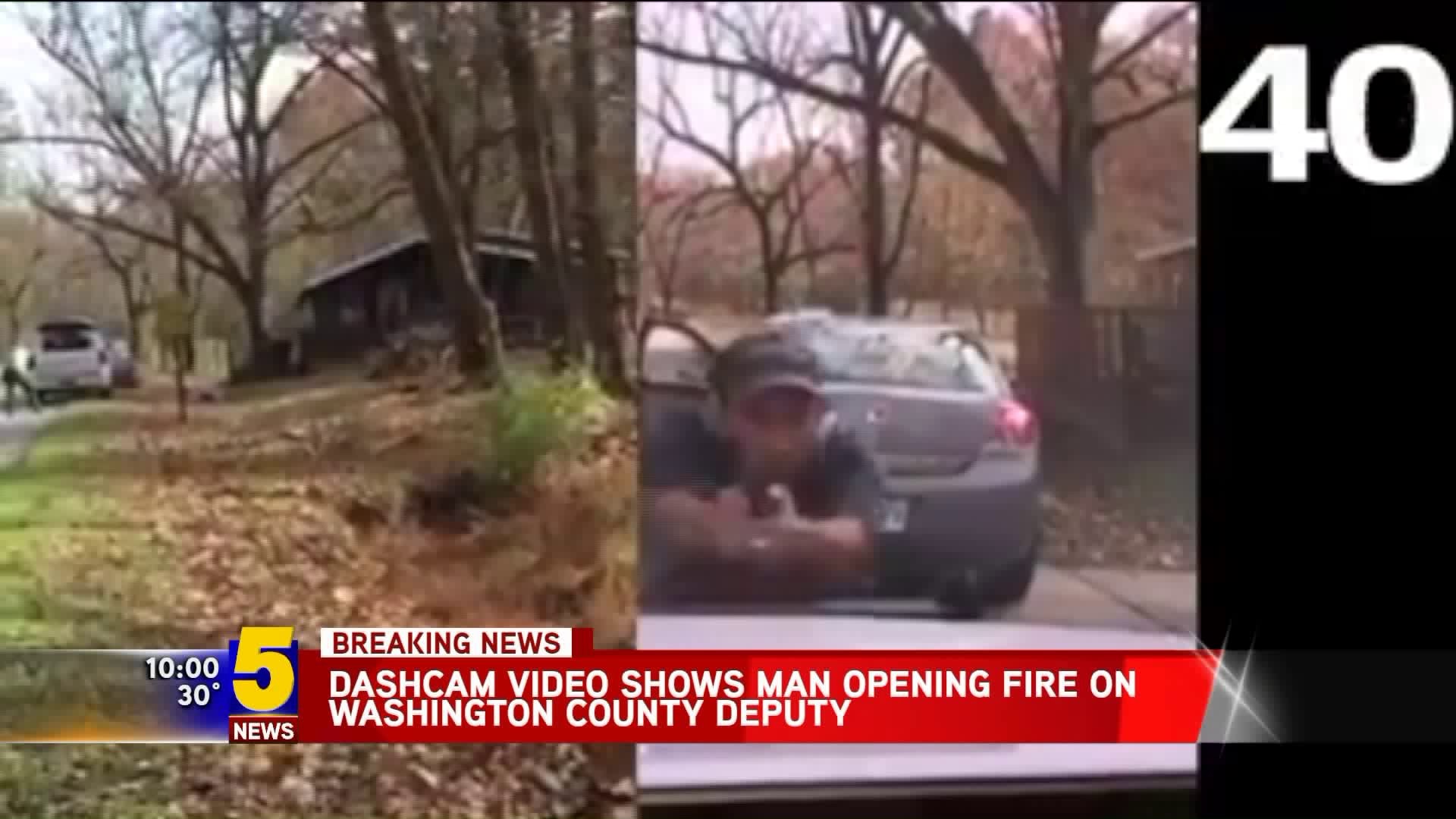 SPRINGDALE (KFSM) — Video captured by a bystander shows the moments when a gunman opened fire on a Washington County deputy who tried to stop him near Tontitown.

Julie Smithson posted the video on Facebook and said the video was captured by her husband, Ryan, on Steel Road near Tontitown.

Ryan Smithson crouched behind his truck for protection as a Washington County sheriff's deputy exchanged gunfire with a suspect later identified as Luis Cobos, 29, of Springdale.

Cobos is accused of attempted capital murder after he allegedly shot at several police officers on Sunday (Nov. 11).

Cobos was also arrested in connection with committing a terroristic act, fleeing, possession of a controlled substance and possession of drug paraphernalia.

Cobos-Cenobio told police he "wanted to die," according to a probable cause affidavit.

Springdale police said they were notified about shots fired at a Washington County Sheriff Deputy near Tontitown,  shortly after 12 p.m. Sunday.

Corporal Brett Thompson tried to stop Cobos near South Barrington and Steel roads in Tontitown for a traffic violation, but Cobos kept driving.

Cobos continued on Steele Road and eventually stopped.  When Corporal Thompson got out of his vehicle, Cobos-Cenobio also stepped out of his car and began shooting, prompting Thompson to return fire, police said.

Cobos got back into his car, took off, stopped again, let a female passenger out of the car and continued driving, according to the Washington County Sheriff's Office (WCSO).

The Washington County Sheriff's Office dashcam footage from the traffic stop to their Facebook page on Tuesday (Nov. 13).

A viewer video shows the woman being detained by the deputy who was fired upon in Tontitown.

Authorities then issued a "Be On The Lookout (BOLO)" for the Cobos and his 2008 Saturn.

A short time later, Springdale police said they found Cobos car on U.S. 71B near Shady Grove Road and gunshots were again exchanged.

Cobos, again, took off and a pursuit ensued into Fayetteville and back to Springdale, with Arkansas State Police (ASP) and Fayetteville police assisting.

Springdale police said Cobos-Cenobio returned to Don Tyson Parkway and South Thompson Street, where he stopped and surrendered to them.

Amber and Heaven Williams witnessed some of the incident.

"I watched the back window of the Chevy Impala they were shooting at, I watched it shatter.  The front of one of the cop cars, their front windshield got busted out with a gunshot and then after that, there were cops everywhere," they said.

Other witnesses who were at the intersection of Thompson and Don Tyson told 5NEWS they heard shots fired.

Mike Jones was at a nearby establishment.

"Several [shots] is an understatement," Jones posted on Facebook.  "I was sitting at Casey’s when he came through the first time and had a shootout with the cops. I’m guessing 30-40 shots fired."

Cobos appeared to have suffered a gunshot wound to his shoulder. He was transported by Springdale police to Northwest Medical Center where he was treated and released into their custody.

Police said they found some marijuana and two pipes inside Cobos car.

No officers or deputies were injured.  Two Springdale police officers who fired the shots are on administrative leave, as is protocol, pending the investigation by the ASP.

Cobos was being held Monday (Nov. 12) at the Washington County Detention Center on a $500,000 bond and a hold for federal court.

A spokesman for U.S. Immigration and Customs Enforcement couldn't speak to specifics of Luis Cobos' status, but he did confirm there is an ICE detainer on him. Those holds usually reflect a person who is a foreign national, the spokesman said.

Cobos has a hearing set for Dec. 10 in Washington County Circuit Court.

Springdale Man Arrested After Shooting At Multiple Officers During Pursuit