Governor Beebe gave a news conference Monday morning (April 28) to update residents on the tornado situation. At least 14 people were killed in a tornado that r... 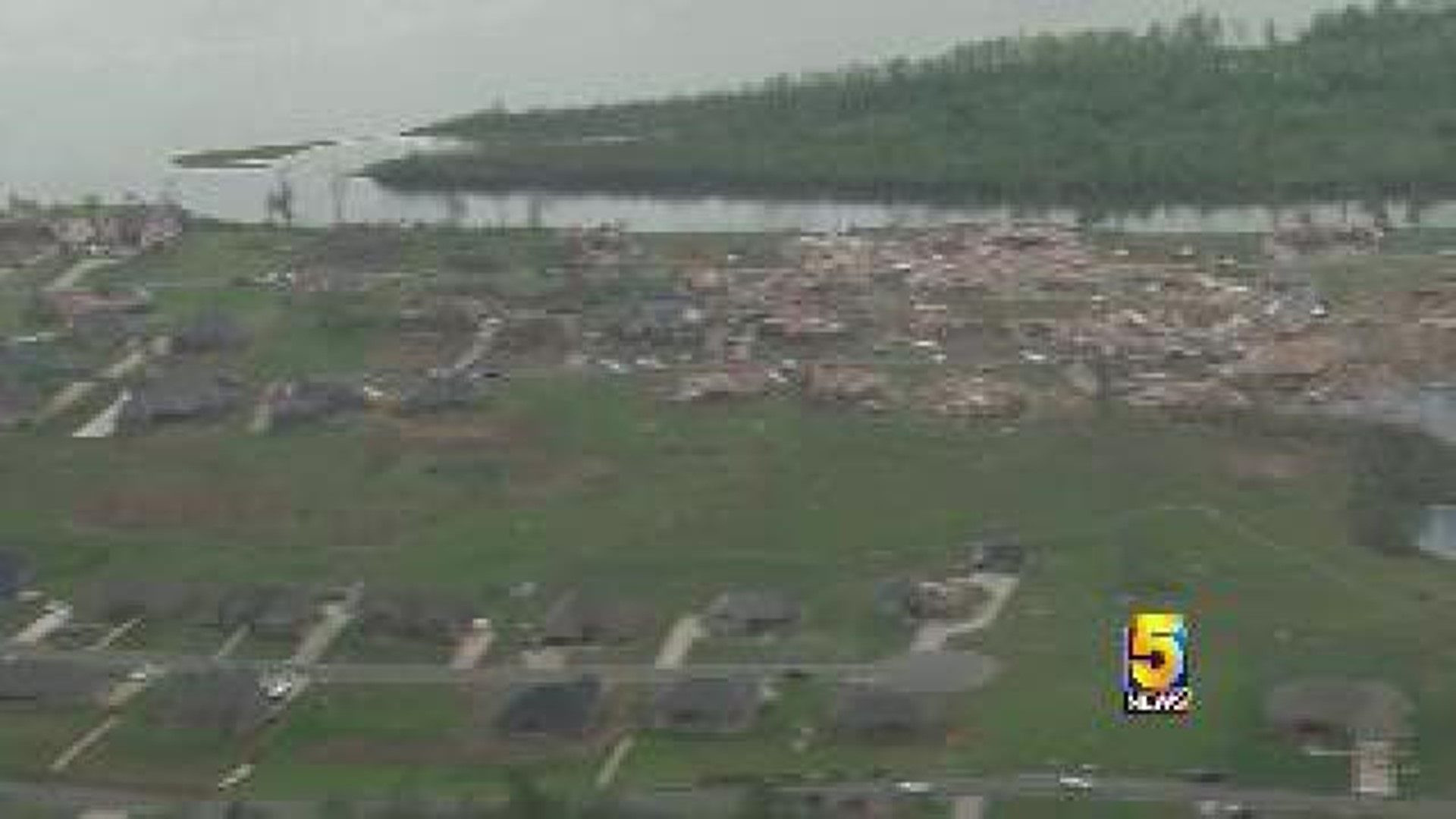 At least 14 people were killed in a tornado that raked Central Arkansas on Sunday (April 27), authorities said.

Brandon Morris, of the Arkansas Department of Emergency Management, confirmed to CBS News early Monday that at least 16 people had died, but that number was later adjusted to 14 deaths: 10 in Faulkner County, three in Pulaksi County, which includes Little Rock, and one in White County.

The original report indicated five people were killed in Pulaski County, but that number was reduced to three, bringing the total number of deaths to 14.

"It's been a truly awful night for many families, neighborhoods and communities, but Arkansans always step up to help each other recover," the governor said on Twitter.

State troopers performed the same task among the damaged and toppled 18-wheelers, cars and trucks on a two-mile stretch of Interstate 40, a major thoroughfare in and out of Arkansas' capital city.

In Pulaski County, Ark., Sheriff's Lt. Carl Minden said three people were killed when a tornado destroyed a home near the Pulaski/Saline county line about 10 miles west of Little Rock. Minden said several others were injured at the scene.

"I'm standing on the foundation of the house now. It's totally gone," Minden told The Associated Press by phone. He said other areas of the county sustained storm damage, but no other fatalities had been reported.

In Mayflower, Jacci Juniel was caught away from her home after leaving to find her son as the storm approached. Her 96-year-old mother, left at home, suffered cuts when the storm blew out a window.

"We had to climb over trees and power lines and under neat trees. I was just trying to get home to my mom," Juniel said.

Vilonia was hit hard for the second time in three years. Four people were killed in a 2011 storm.

"Homes and businesses are destroyed," Matt DeCample, the governor's spokesman, said. "The size of the path sounds like a half-mile to three-quarters of a mile wide when it went through."

The Arkansas storm, which was on the ground off-and-on for nearly 80 miles, was one of several tornadoes that touched down Sunday as a large storm system moved through parts of the Plains, Midwest and South.

"Sorrow and grief for the devastation and tragic loss of life caused by last night’s storm is shared by Arkansans all over the state.  Our thoughts and prayers are with everyone affected and hurt by this horrific storm, and we thank the first responders who continue to help those in need."

Less than two hours before the Arkansas tornado struck, the twister hit Quapaw, a community of about 900 residents in northeastern Oklahoma near its border with Kansas and Missouri. Ottawa County sheriff's dispatcher Kelli Soechs said it killed one person, not two, as her office had reported earlier in the evening. Soechs declined to explain the discrepency.

Five of the six injured in Quapaw were treated and released from Baptist Regional Health Center in Miami, Okla., said hospital spokeswoman Kristie Wallace. The sixth, who was in fair condition with a broken bone, was kept overnight, she said.

"Looks like about half of town got extensive damage as well as the fire department," Morgan said.

Cherokee County, Kan., sheriff's dispatcher Josh Harvey said the tornado that hit Baxter Springs injured several people and caused extensive damage, but that no deaths had been reported. He said first responders were going from house to house checking on residents' wellbeing.

Storm ratings were not immediately available. Before Sunday, the country had not had a tornado rated EF3 or higher - with winds above 136 mph - since Nov. 17, streak of 160 days, the fourth-longest on record. This also would be the latest date for a storm rated EF3 or higher. The previous latest big storm was March 31, 2002.

Tornadoes also touched down Sunday in Nebraska, Iowa and Missouri. Tornado warnings, which indicate the greatest threat of a strike, were also in effect for parts of southeastern Missouri and northeastern Arkansas as of 9 p.m. CDT.

One of Sunday's twisters touched down northwest of Joplin, Mo., where a massive tornado in May 2011 killed 161 people, injured many others and leveled a large swath of the city. Sunday's twister didn't hit Joplin.

The first reported tornado Sunday touched down in a rural area in central in Nebraska. The weather service said it remained on the ground for only a short time, and there were no immediate reports of damage.

The Missouri Highway Patrol also reported a tractor-trailer was blown onto its side on Interstate 70 about 30 miles east of Kansas City about 1 p.m. No one was injured. The weather service received a report from Plattsburg, Mo., where an anemometer measured 58 mph before it blew away. Golf ball-sized hail was reported at Overland Park, Kan., and Trimble, Mo.

To the southeast, northern Louisiana and Mississippi were bracing for severe storms along with the possibility of flash flooding. The predictions prompted Barksdale Air Force Base near Bossier City, La., to cancel its air show on Sunday. The National Weather Service said northern Alabama could see rain and flash flooding, while central and northern Georgia could see storms and heavy rain.

Sunday was the third anniversary of a 122-tornado day, which struck parts of Mississippi, Alabama, Tennessee, Virginia and Georgia and killed 316 people.

CBS News contributed to this story. To read more from KTHV-11, our CBS content partner in Little Rock, click here.