FAYETTEVILLE (KFSM) – The Fayetteville school district is preparing for the upcoming semester with a new superintendent. The school board appointed Dr. Jo... 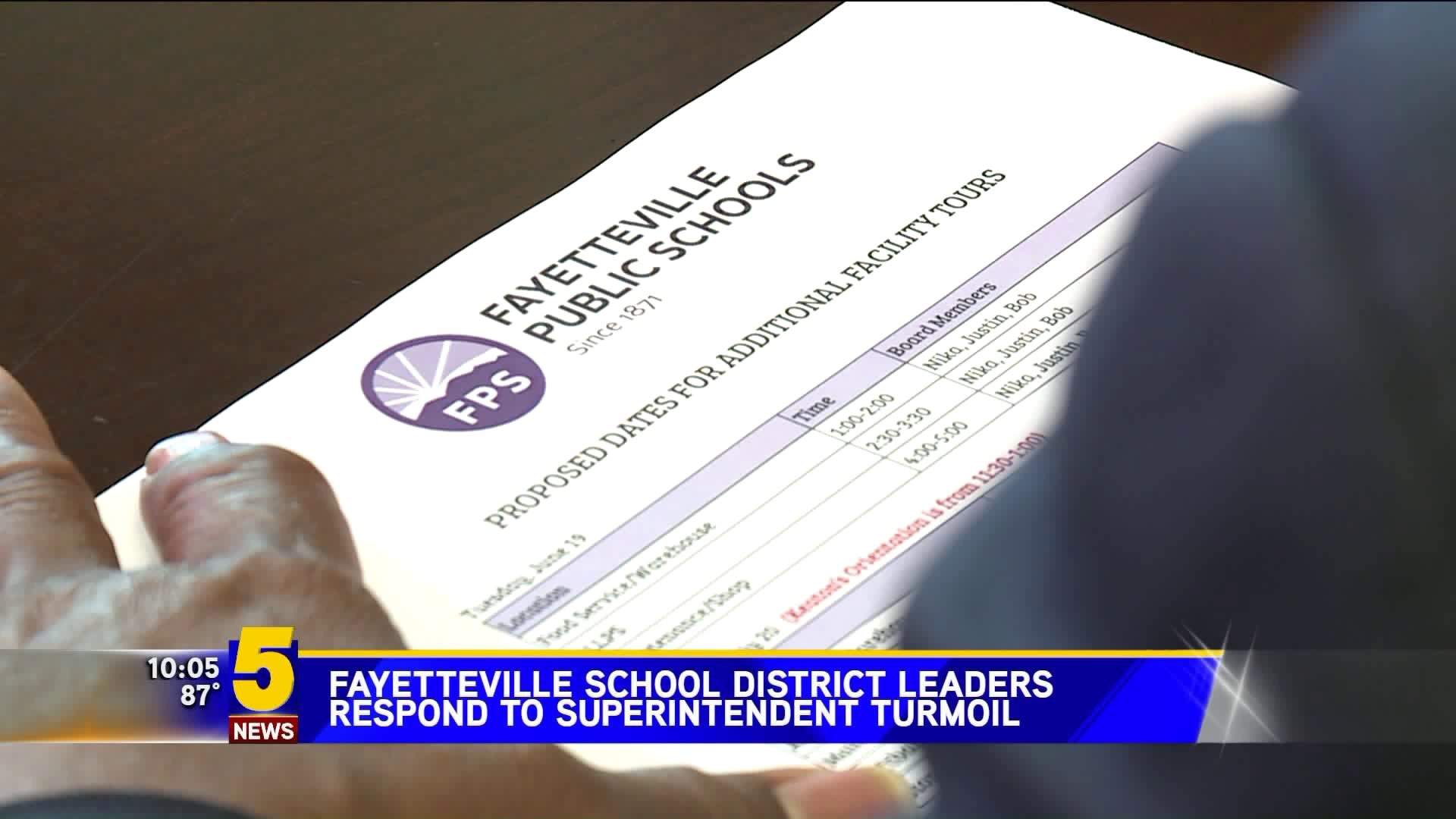 FAYETTEVILLE (KFSM) - The Fayetteville school district is preparing for the upcoming semester with a new superintendent. The school board appointed Dr. John L Colbert to the position on June 21. It was the culmination of three months of turmoil within the district.

Now, for the first time, we’re hearing from district leaders who say it’s been a difficult process for everyone involved but the future is bright!

When the Fayetteville School Board first heard of the sexual harassment accusations against Superintendent Dr. Matthew Wendt, it was sworn to secrecy.

"One of the difficulties in such an investigation is that we are required to keep confidentiality, not only for the accused but for the accuser," said Justin Eichmann, Fayetteville School Board President.

"So I can understand that at least for some folks it seemed like they weren’t sure why it was taking the time it did," said Hudson.

But both men say investigations like this must follow due process, something that just takes time, and other employment issues have taken longer to resolve.

"What you have to do is make sure you are dealing with surprises like this in a proper way," said Eichmann.

"Last thing we want to do is rush through something, especially when it comes down to people’s livelihood and their jobs and their contracts with the district," said Hudson.

Even with Dr. Wendt gone, the district is facing another lawsuit. His accuser is suing the district to not release her personnel records, requested through the Freedom of Information Act. The district responded to a complaint filed in Washington County Circuit Court.

"We will comply with what the law states and ultimately if it comes to a court decision, we’ll disclose what the courts insist upon," said Hudson.

"Typically in these FOI cases, they move pretty quickly so we should know something fairly soon I would think," said Eichmann.

In the meantime, Eichmann says Dr. John L Colbert is a leader who inspires others.

"Not only the natural choice but the right choice," said Eichmann.

"It was a dream to come true and it really touched my heart that the school board put that trust in me," said Dr. John L Colbert, Fayetteville Public Schools Superintendent.

Dr. Colbert says stepping into the role of acting superintendent for two and a half months before officially being hired made for a smooth transition. And his longevity with the district sets him apart. He’s spent nearly 40 years with Fayetteville Public Schools, first as a teacher, then principal and the last decade in administration.

"I do feel that I can relate to anyone from teachers, custodians, bus drivers, even the parents, I’ve had that experience too," said Dr. Colbert.

And when it comes to changing the culture within the district after the last four months, Dr. Colbert believes it all starts with respect.

"How do we deal with other personnel and making sure that they all are feeling safe, that they all feel comfortable? And we have to keep that in mind," said Dr. Colbert.

"Our policies apply to everybody," said Eichmann.

Ultimately, the district and school board want the focus to be on students and the mission of exceeding expectations.

"We want the public to understand that it’s the expectation of our district to have that safe, appropriate, professional environment throughout the district, from top to bottom," said Eichmann.  “Unfortunately, you have these situations where you get disappointed. But not one person defines our community."

"One employee, even the top administrative leader, does not entirely make a district a wonderful district," said Hudson.

The school board’s next meeting is July 26 (Thursday). President Justin Eichmann plans on addressing workplace culture and appropriate conduct within the district. And as a top priority, he says the board is willing to spend money on training so long as it’s effective.

The board will also hear recommendations from the Superintendent School Safety and Security Task Force, created by Fayetteville Public Schools in early March after that deadly school shooting in Florida. It’s made up of district leaders, judges, law enforcement and lawmakers. According to Dr. Colbert, the group has spent the last five months evaluating the district’s crisis and safety plans. The goal is to come up with ideas on how to enhance what’s already in place. Then it’ll move onto the next phase.

"Especially when we think about how some of the shooting was done by school students… so we want to see if we can identify some of those signs early so therefore, we will be implementing what we call a Mental Health Task Force," said Dr. Colbert.