FORT SMITH (KFSM) — Many people are going on trips this time of the year, prompting social media posts about the upcoming vacation, but police said itR... 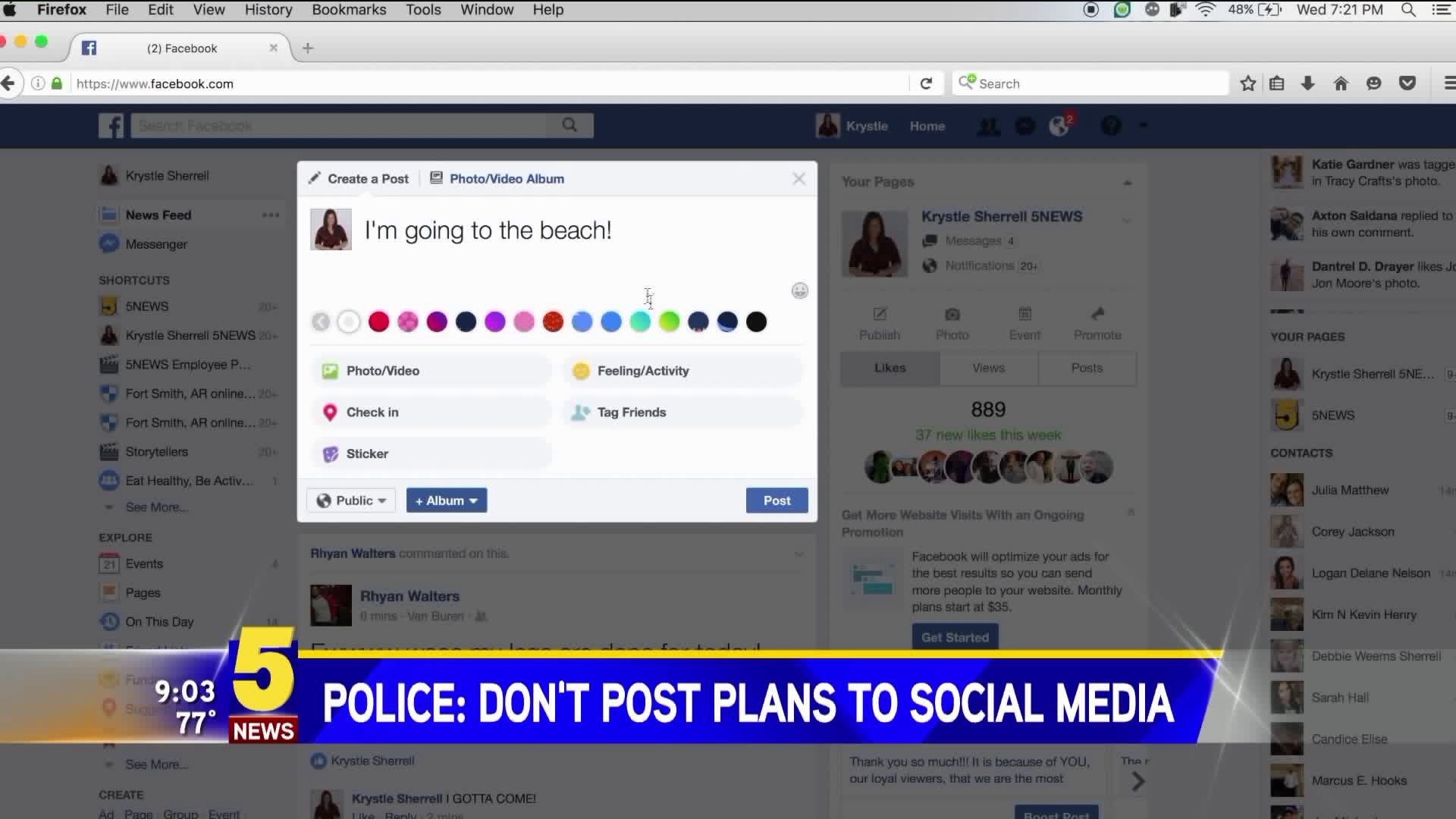 FORT SMITH (KFSM) -- Many people are going on trips this time of the year, prompting social media posts about the upcoming vacation, but police said it's not safe to let the public know you won't be home.

"There's too much trust when you're in the social media world," Sgt. Daniel Grubbs with the Fort Smith Police Department said. "You accept friend requests from people that you vaguely know. Once you start creating posts and it's shared and it's like, it's this spider web of other people that can be seeing that. So, you're advertising to the entire group that you're connected with that you're not home."

Another aspect of social media is becoming an issue, as well. People posting pictures of their children on vacation has lead to strangers gaining access to those photos on social media. In some cases around the country, those photos have been posted on inappropriate sites.

"Whenever you take a picture, you're not going to have the same mindset as some of the sick people on this planet have," Grubbs said. "If they see it and potentially obtain it, I think it would be wise to sanitize some of the pictures that you do so mindful."

Police and travel agents said there are a few things you can do to ensure the safety of your home and family while you're on vacation.

"When you put your baggage tags on your luggage, don't put your home address," John Hendrick, travel consultant with  Deramus Travel said. "That's another way people can find out that you're away from home. Put your work address or relative's address instead."

Sgt. Grubbs said he has used a few tricks while he's away over the years.

"I like to leave something on inside like a radio that gives voices to where it sounds like people are talking," Grubbs said. "But then you mix that in with making sure everything is locked and again the photos and social media. It's one huge package to me to kind of bare in mind when you take a long vacation."

So, as the experts said, save those vacation pictures for after your fun getaway.

"You certainly want to share your vacation, but I think you can post those when you get home," Hendrick said. "It has just as much of an effect after you're home and it's a lot safer to do it that way."

Fort Smith Police said 90 percent of recent cases of theft have been because people are leaving their cars unlocked or leaving valuables inside of them while they are away. Police advice people to double check all locks on your home and vehicles and to take valuables out of sight before leaving for vacation.