PEA RIDGE, Ark. (KFSM) — A local couple is being called heroes after saving a baby locked inside of a hot car in a local Walmart parking lot. Michelle and Nate ... 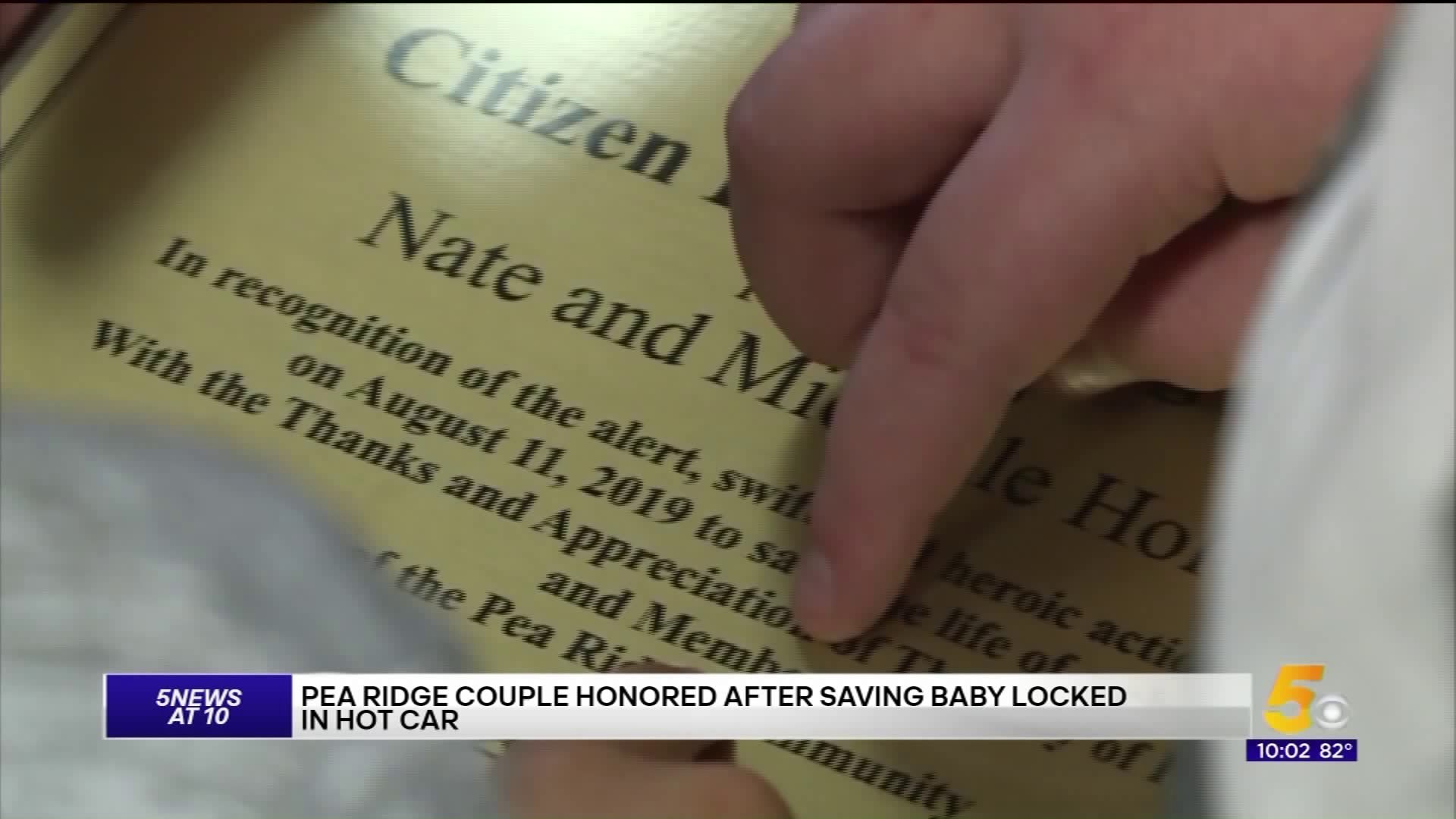 PEA RIDGE, Ark. (KFSM) — A local couple is being called heroes after saving a baby locked inside of a hot car in a local Walmart parking lot.

Michelle and Nate Holt were honored Tuesday (Sept. 17) by the town of Pea Ridge for their life-saving action.

New surveillance video from that Sunday (Aug. 11) shows shoppers gathered around the SUV in the Pea Ridge Walmart parking lot with a baby trapped inside.

The Holts noticed the crowd around the car that day and acted quickly, with temperatures climbing near triple digits.

"He ran out, grabbed a brick, threw it through the back window and then he dove in, opened the door and I got the baby and took him inside," Michelle said.

Michelle says that day before first responders arrived, the baby was foaming at the mouth and barely responsive.

"It was traumatizing the first week or so after that, it was pretty hard," Michelle said.

Today, the baby has made a full recovery, and the couple says this is what they have prayed for.

"I'm really just appreciative that he is OK, the baby is OK, Nate and I pray for him often," Michelle said.

The Pea Ridge Police Department, Fire Department and Mayor presented the Holts with a life-saving award to honor their heroic acts.

"This event is the perfect example as to how and why someone should do what they did, without their actions we would be talking about a completely different story," said Lt. Michael Lisenbee with Pea Ridge Police Department.

The Holts say they never thought twice as to what needed to be done that day. Michelle says now she hopes to share this story to hopefully save another life in the future.

"Just not to be afraid to help, not to be afraid of what might come out of it, consequences. Nate and I never questioned that, it was get the baby out of the car and make sure it was okay," Michelle said.

Luckily, the story has a happy ending thanks to the Holt's.

"There is no question at all that their heroic acts are the reason why that baby boy is still alive today," Lisenbee said

After this experience, Michelle says she is working to contact state lawmakers to push for stricter punishments in Arkansas for leaving children unattended inside a vehicle.

Police say 21-year-old Karlee Spear left her child in the car for more than 45 minutes. Spear and her friend who was with her that day, 26-year-old Ashlee Danly, have both been charged with endangering the welfare of a minor.

Investigators say both women have since pleaded not guilty and have a trial set for October 22.